Termination of Occupation Agreement and Mujahidin dealings with Kabul 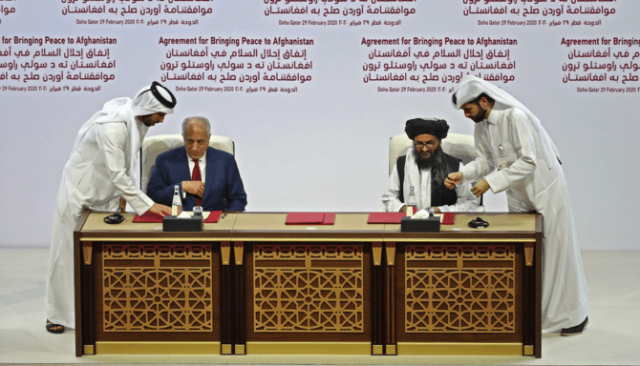 On the 10th of Hoot, the Lord Almighty (SWT) fulfilled the hope of the Afghans for which they have presented monumental sacrifices and which has rarely ever been witnessed in human history.

After this agreement, some people have raised the question of whether the obligation of Jihad has come to an end in the current circumstances? And what is the Shariah-based ruling regarding it from now onwards?

The reality of the situation remains that prior to the American invasion, we had a lawful Emir who was declared the Leader of an Emirate by 1500 scholars and with whom millions had pledged their fealty. Later, the Americans attacked our homeland and the Emirate collapsed but this collapse did not nullify the status of the lawful Emir as the books of jurisprudence state that if an Emir is detained and imprisoned yet there remains a chance of his release, his Imamate (office) is not nullified. Rather when he does get released, his rule resumes and appointing another leader has no legality.

Because the rule of non-believers cannot be implemented upon the Muslims as Allah (SWT) says:

Therefore, the lawful Amir remained on his post after the invasion and the Emirate systematically continued until today.

Some Muslims allied with and supported the invasion of the disbelieving invaders. Shariah law labels such an action ‘Supporting the Disbelievers’ which some scholars have labeled apostasy like Allamah Ibn Tammiyah, Abul Hassan al-Tasuli and Sheikh Ahmad Shakir (may Allah have mercy on them all).

However, our Hanafi scholars do not label such people apostates. Allamah Tahawi (may Allah have mercy on him) reasons with the story of Hatib ibn Abi Balta’a and does not consider it apostasy.

They are only classified as astray, however, such people are the highest-ranking immorals and criminals because it is an obligation upon all Muslims to strictly refrain from such alliance and support. Allamah Baydawi (RA) in his commentary of verse 51, Surah Maidah says:

Allamah Jassas (RA) says: This verse implies that Muslims and disbelievers cannot have a friendship – neither in possession nor help and support – and that disavowment and enmity towards them is an obligation. [أحكام القرآن للجصاص: 4/99]

The ruling of [described in verse 51 of Surah Maidah] fighting against them is the same as that of the disbelievers.

The goal of the Jihad of the Afghans who have fought for nineteen years are:

1 – Rid our homeland of invaders

All praise belongs solely to Allah, the believing Afghan nation has come closer to attaining their first goal and with the Help of Allah (SWT) their sacrifices shall bear fruit. But this in no way shape or form implies that after the Mujahidn expel the invaders, they should return back to their homes and hand over the reins of the government to those corrupt elements that supported the invaders with their lives and possessions.

God forbid, if such a scenario were to unfold then the goals of Jihad and fruits of the monumental sacrifices of the Afghan nation would be squandered akin to what happened in the previous Jihad where the Soviet was beaten but our nation continues to reel from the ensuing disasters.

Responsibility of the Islamic Emirate after the Agreement:

The principle responsibility of an Islamic government and its Emir is the establishment of Shariah law. Allamah Mawardi (RA) says:

As this 19-year Jihad against the occupation was waged under the command of a legal Emir, the Termination of Occupation Agreement does not mean that his rule is absolved hence it is not allowed for anyone to appoint another ruler in the presence of an already legal Emir. The establishment of Shariah is an obligation upon the Emir and anyone standing in opposition to its establishment must be fought against just as Abu Bakr Siddique (may Allah be pleased with him) declared Jihad against those who opposed the ruling of Shariah following the passing away of the Benevolent Prophet (may peace and blessings be upon him).

It is reported in Sahih Bukhari: When the Prophet (PBUH) passed away and Abu Bakr (RAA) became his successor and some of the Arabs reverted to disbelief, ‘Umar (RAA) said, “O Abu Bakr! How can you fight these people although Allah’s Apostle said, ‘I have been ordered to fight the people till they say: ‘None has the right to be worshipped but Allah, ‘and whoever said, ‘None has the right to be worshipped but Allah’, Allah will save his property and his life from me, unless (he does something for which he receives legal punishment) justly, and his account will be with Allah?’ “Abu Bakr said, “By Allah! I will fight whoever differentiates between prayers and Zakat as Zakat is the right to be taken from property (according to Allah’s Orders). By Allah! If they refused to pay me even a kid they used to pay to Allah’s Apostle, I would fight with them for withholding it.” ‘Umar said, “By Allah: It was nothing, but I noticed that Allah opened Abu Bakr’s chest towards the decision to fight, therefore I realized that his decision was right.”

Here Abu Bakr (RAA) talks about Jihad not because of apostasy but of fighting them for refusal of Zakat.

Now, if America faces defeat and they terminate their occupation but leave elements trained and equipped by them whom pursue their interests, then what would be the benefit of Jihad and these sacrifices?

Until the occupation is completely severed from its roots and an Islamic government formed, the Mujahidin shall continue waging armed Jihad and exerting efforts for the implementation of Islamic rule.

Nevertheless, the best course of action remains that the Islamic Emirate and all the other Afghan sides sit at the negotiation table and conclude an agreement which shall become binding upon all the Mujahidin and must be honored and implemented by all.