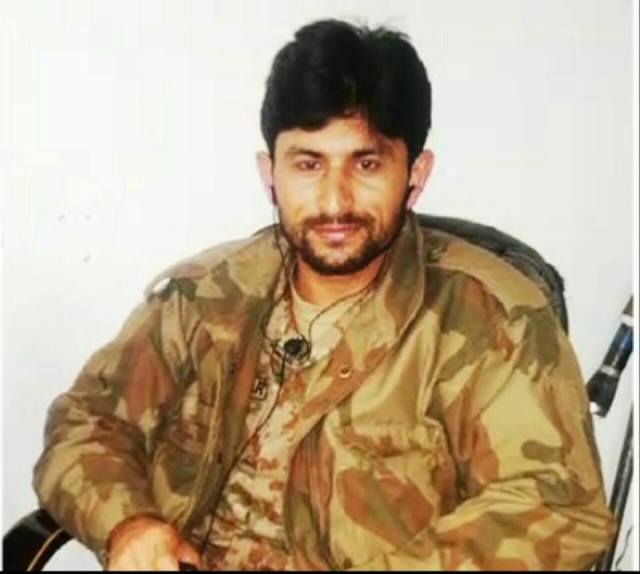 “Commando Muddassir Iqbal” alleges “he and all other commandos killed children and later Taliban was blamed.”

A video has emerged on a social media site named Tribal News which contains a new “confessional” statement from “Commando Muddassir Iqbal”  alleging that the Pakistan army were linked to shootings of children in the Peshawar Army Public School and College (APS) massacre on the 16th December 2014. The attack on the school, claimed by Pakistan Tehreek-e-Taliban (TTP) led to the slaughter of 140 schoolchildren and adults with 122 injured. The BBC reported, “gunmen had walked from class to class shooting students in the Pakistani Taliban’s deadliest attack to date.” See following link for details of the incident,

Iqbal is said to have “deserted the army” and “joined mujahideen” though no dates were given. In the run -up to the video being released, Tribal News stated that a series of ten episodes would be broadcast by them, which “includes interesting and dangerous developments of a powerful military strategist from the Pak Army.”

Topics that would be covered include the APS attack, Kashmir policy, Pakistan Army opinions on the citizens of Afghanistan, private lives of Army officers and employees and a recent assassination explaining, “how easily, the Army take a terrorist label on people.”

Since the school attack, different versions of events have emerged regarding what took place at APS. One TTP militant who spoke in 2014 on condition his name was withheld, alleged shortly after the attack that something went wrong and what occurred did not follow what was originally planned. He claimed that operatives used may have had their own agenda and diverted away from a plan to hold children hostage while demands to free prisoners were placed on military, to a mass killing spree. This was denied by a another TTP Commander. Below is the official TTP statement released in January 2015,

The video begins with a photo of Iqbal in army uniform. He is then shown in shalwar kameez holding what appears to be a Pakistan army identity card. The “confessional” monologue takes place with Iqbal sitting on a blue chair against a blank wall. He looks at ease sometimes smiling. Occasionally a waft of black material drifts into the video possibly from clothes drying or the outfit worn by the person filming. Iqbal is said to have “deserted recently, he repented now on his crime, on his sin..and he confesses” according to one person posting the video. Another claim is that he is now with militant group Jamaat ul Ahrar which splintered off from TTP in August 2014. Ehsanullah Ehsan, former spokesperson for TTP JA left the group in April 2017, turning himself in and doing his own “confessional video” see following article.

Iqbal’s video was posted on a site used by the Taliban in addition to the posting on Tribal News site. Tribal News is run by Shahid Ullah Mohmand (email address given) whose information states he was a former doctor at Jinnah Hospital Lahore, studied Urdu at Allama Iqbal Medical College and went to Peshawar Public School and College.

APS attack was strongly condemned globally and even some supporters of TTP expressed their shock and horror that children had been targeted. The video of Iqbal could not be independently verified and may be a “tit for tat” propaganda attempt to hit back at Pakistan Army that are often accused of pressurising those captured in operations to participate in “confessional” videos against Taliban.

This was put to a member of TTP who stated,

“I was in khayber agnecy when aps attack happend. we asked Umar Khalifa the master mind of the attack ,, that media says that kids are being killed. he was on the hotline with brothers inside.. He asked them . They swear we didnt killed any kid, then they said Army is killing them, check there bodies whether they have our Kalashnikov rounds or G3 rounds.”

Umar Khalifa (also known as Umar Mansour) was later killed in a drone strike in Bandar area of Afghanistan’s Nangarhar province in July 2016 according to FirstPost.

Some personal details pertaining to Iqbal can be seen on his identity card. One of those posting gave details of his alleged parents, village, district, army service number, unit, battalion and regiment saying journalists could check this out.

“ Commando Muddassir Iqbal was part of the team who conducted Army Public School operation on 16 December 2014. In this video he reveals that he along with other commandos was ordered to kill the innocent children inside school, when asked why should they kill children after killing all the terrorist he was told that it would be a chance to defame Taliban and get nation on the side. He and all other commandos killed children and later Taliban was blamed.

Asalam o Alaikum: My name is Muddassir Iqbal. My father’s name is Naimat Ali. I belong to Sialkot divison (Punjab province), my village is Shamsher Poor and district, tehsil and post office Narowal. Unfortunately I was working in Pakistan army. I feel embarrassed to tell you that once I was in Pakistan army. But Alhamdulillah I am a Mujahid now.

What I witnessed in Pakistan army made me fear from Allah, I feared what will I answer Him at the Day of Judgement. My army number was 3480905. I joined Tofani battalion of Sindh regiment. From there I moved on to SSG. There in Charat SSG centre I trained for twelve months. Afterwards I spent quite some time with intelligence services.

When we were getting trained we were told that we have no conflict and war with any other country but our real goal is to finish off terrorism. We were told that the terrorists we are fighting with belong neither to Pakistan nor they are Muslims. They are foreign invaders. They are from India or America.

We were very confused that whether we are getting trained against our enemy or we are getting training to humiliate honourable citizens with beards. We could not understand what it was about. Regretfully, we saw this injustice but still we had to be quiet. This is because in army you are not allowed to speak or question anything.

I spent most of my service period in Lahore with intelligence services. Moreover, since I had acquired special training I was involved in operations. We were given different missions. For instance, Army Public school operation in Peshawar. I was called for that operation. I also served with VIP’s.

Army Public School operation was conducted the way Pakistan army has always carried out various operations. In my view Pakistan army has implanted spies in jihadi groups, they provide them with internal information. May be spies of Pakistani army in Taliban on purpose instigated Mullah Fazlullah of Tehrik e Taliban Pakistan to carry on such an operation and in return can put forth his demand. So I think maybe they assured Mullah Fazlullah to take the students of Army Public School in Peshawar as hostage and hence in return he can demand the government to release his fellows from jail. Thus Mullah Fazlullah may have agreed to carry out this attack on Army school and he gave his men some food supply and weapons. As they commenced attack on Army Public school, 2 commando unit of SSG was ordered to combat and I was unfortunately part of it. There we saw that they were only few men while army was more in number and ammunition. Hence army overpowered them soon and eventually men of Mullah Fazlullah were martyred. There were children who survived but our senior Major Jawad ordered us to shoot those innocent children as well.

Then on this few of our men objected that why should we do that, we have achieved our goal and operation is completed. He replied that this is a golden chance for us to convince media that these Mullah Fazlullah men came to kill innocent children. We were told that our real job was not to kill attackers and free children but we were sent in to kill children so that media can be turned against mujahedeen and world can be shown that Taliban carried on this brutal attack on children.

Army planned this to show people of Pakistan that army is their well-wisher while Taliban are enemies. They wanted to prove that without army, Pakistan is crippled. When I was killing innocent school children I was in lot of pain. I was one of them. May Allah forgive me because I have committed this grave sin.

The video comes hot on the heels of President Donald Trump’s speech to continue the war against Taliban in Afghanistan and criticism that Pakistan is not doing enough to eliminate terrorists that criss-cross border regions. Pakistan army launched operation Zarb-e-Azb in June 2014 to clear North Waziristan of militant groups. This was followed by Operation Radd-ul-Fasaad in February 2017, however banned groups continue to thrive and Islamic State now has a presence in the region.

The emergence of another video related to APS attack will cause further anguish for the families of the deceased. Several men have already been convicted in relation to their involvement in APS massacre, their appeals rejected and were sentenced to hang according to Dawn newspaper. Whatever happened on the 14th December 2014, the families of those so brutally killed seek truth and accountability regarding the deaths of their loved ones.