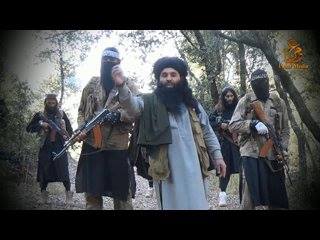 Mullah Fazlullah, Emir of Pakistan Tehreek-e-Taliban has appeared on video giving a verbal response to the attack on Peshawar Army Public School and College on the 16th December 2014 by TTP which killed over 140 schoolchildren and adults and left 122 injured. See following BBC link for story of massacre,

He alleges that students were intended for exchange with TTP prisoners but army firing altered the whole scenario.

“First thing is about the army and the current situation. What the army has done everyone knows. We conveyed our message of peace through each and every forum to the government but—-you know that we are in war with you. If you are killing our people, those were unarmed, and then remember every action has its reaction. We are following the teaching of Allah otherwise we would teach you a lesson that how people are being killed.

Pakistan is already ruined neither the US nor the infidel Pakistani army can save it. What you (army) has done with our prisoners and women, you know what you have done. If you are killing our people then be brave and do everything with evidences and in front of people. Don’t kill them in fake encounters. We do everything with evidences. We have no lust for killing of people, bloodshed. But you have killed our people all around the country and released the dead bodies in different squares and termed them encounters. You have started torturing our women but we are not making it public or complaining but we complain to Allah.

Look the recent incident of Peshawar; it was not a school but it was a cantonment/fort of military not a school. When it is army public school it means it is cantonment and there is no question of not attacking it. If it was school what a colonel and brigadier were doing inside? We will try our best to find such attacks, such cantonments where the children of officers are reading, and those boys are mature of 18 and 20 year old they are our targets. If we found such targets in bazaars will not spare those and only we would show mercy on children and women.

The war will continue and we could not be eradicated with such killing of our men in fake encounters with jails and martyrdoms. Allah will never allow us to be ruined. We had sent our men to make the school (students and others) as hostages, to ask for the release of our men and to catch the attention of media. But the forces started firing that changed the whole scenario.

Those who were sent for the attack were human; they had blood in their veins; they were there not for any personal gain but they were there for a noble cause. They checked the identity that whether they were the children of the army personnel or not and they were mature (above 18). If we had to kill all the students then we would asked our fighters kill all. Those who were freed they were not by the army but they were allowed by our men to go. The mature were killed as tomorrow they would become army officers and would come to combat us.

When the wives of army personnel weep their husbands would realize that they had made many mothers to weep by killing their small children. Everyone says that it is inhuman but no one talks about thousands of children and women who disappeared from Swat IDPs camps. Look to Lal Masjid incident. Sabawon (a school established by army in Swat region to indoctrinate children of militants) is not school but jail. No one is objecting it but this one (army public school). I finally invite all those suicide bombers who are out of contacts and want to hit such targets should contact us.”