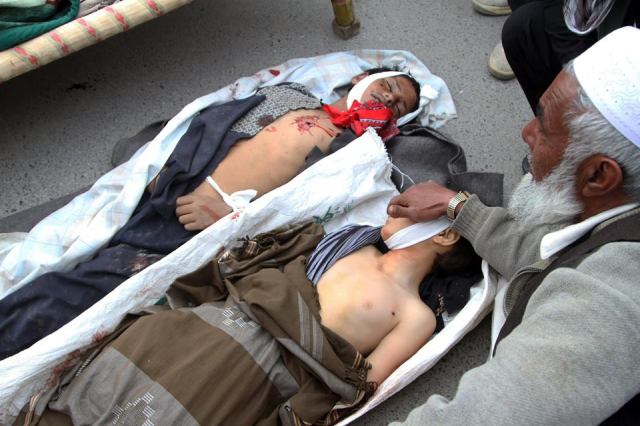 On Tuesday 2nd February, a woman and a child were martyred and another woman and a man were injured in the indiscriminate artillery fires of the internal mercenary forces in ‘Umar Khail’ and ‘Shair Mohammad’ areas of ‘Ali Abad’ district in ‘Kunduz’ province.

On Friday 5th February, houses of civilian people were searched during a raid of internal stooge soldiers in ‘Tore’ village of ‘Nakka’ district in ‘Paktika’ province, in which, several people were badly beaten and four ordinary persons were incarcerated too.

On Saturday 6th February, a boy and two Mulla Imams (the one who leads congregational prayers) were taken away as prisoners during a raid of internal mercenary forces in ‘Navaqil’ area of ‘Batikot’ district of ‘Nangarhar’ province.

On Sunday 7th February, two children were martyred and a woman was injured in the indiscriminate mortar shelling of internal amateurish soldiers in ‘Band’ village of ‘Sarobi’ district in ‘Kabul’ province.

On Monday 8th February, houses of ordinary countrymen were heavily fired during a raid of foreign occupying forces collaborated by their internal stooge soldiers, the latest in the sting of their night operations, in ‘Chinar’ and Tambail’ villages in ‘Khakraize’ district of ‘Kandahar’ province. When the people left their houses in panic and fear, they were indiscriminately targeted by drone strikes, in which, at least, thirteen people were martyred and eight others were injured.

On Thursday 11th February, four innocent civilians were detained and taken away as prisoners by foreign occupying forces during their night operations in ‘Shna Jama’ area of ‘Nad Ali’ district in ‘Helmand’ province.

On Thursday 11th February, the chieftains of embattled ‘Baghlan’ province revealed, in a meeting held in Kabul, the immensity of losses and casualties suffered by the civilian people in ‘central Baghlan’, ‘Dand-i-Ghori’ and ‘Dand-i-Shihabuddin’ areas in the wake of those military operations which were launched by the mercenary forces of puppet regime in the closing days of last January. They said that at least 125 civilian countrymen were martyred in the military operations of stooge government forces, including 40 women and children. 650 people were injured too.

These chieftains added that mercenary forces of this puppet regime deliberately demolished their orchards and destroyed their crops, justifying that their armed opponent might take shelter there.

It was also revealed in this meeting that nearly 17,000 families had left their houses and villages in the wake of these indiscriminate military operations and had settled in various other areas. Distressing pictures of destroyed houses, mosques, public places and vast demolition of several villages were exhibited in this gathering, while demanding the earliest possible end of these brutal military operations; but their demands and slogans fell flat on the puppet regime and the operations are incessant in the area, in which, the ordinary people are still suffering and complaining.

On Tuesday 16th February, the internal mercenary forces broke the gates of civilian houses in ‘Abdullah Khail’, ‘Navi Kala’ and ‘Zara Kala’ villages of ‘Najrab’ district in ‘Kapisa’ province, in which, several people were beaten and four of them were taken away as prisoners.

On Wednesday 17th February, the only hospital in ‘Tangi Bazaar’ of ‘Jalga’ district in ‘Maidan Wardak’ province, funded by Swedish Committee for Afghanistan, was attacked by brutal foreign occupying forces collaborated by their internal mercenary forces, in which, four patient under treatment were martyred on the spot; doctors and other medical staff were tortured and threatened. Moreover, medical supplies and equipment of this hospital were looted and its building was severely damaged.

On Thursday 18th February, two ordinary people were martyred and another one was injured in the indiscriminate artillery shelling of internal amateurish soldiers in ‘Adisa’ area of ‘Dasht-i-Archi’ district in ‘Kunduz’ province.

On Friday 19th February, a private health clinic and a civilian vehicle were blasted and three ordinary people were taken away as prisoners by the internal stooge soldiers in ‘Sara Baghal’ area of ‘Maiwand’ district in ‘Kandahar’ province.

On Saturday 20th February, hundreds of civilian dwellers of ‘Shilgar’ district in ‘Ghazni’ province protested against the indecencies of local unrestrained Arbaki militiamen in the central Ghazni city. The demonstrators told that ordinary people are beaten and threatened; people are abducted for ransom; their cash money is looted and innocent people are beaten to death for various lame excuses by these notorious militiamen. They told that a teacher and another villager were beaten to death by these Arbakis in ‘Kajir’ area of this district. ‘These unrestrained militiamen will no longer be tolerable for them’, they added while demanding the puppet regime to remove them from their area as soon as possible, otherwise it will be responsible for the bitter consequences.

On Friday 26th February, five ordinary villagers were detained and taken away as prisoners by the brutal foreign occupying forces during a raid in the string of their night operations in the suburbs of ‘Asmat Bazaar’ area in ‘Nad Ali’ district of ‘Helmand’ province.

On Saturday 27th February, the foreign occupying forces raided ‘Laam’ area in ‘Khakraize’ district in ‘Kandahar’ province in the series of their brutal night operations, in which, five innocent civilians were incarcerated.

On Saturday 27th February, two ordinary shopkeepers were relentlessly martyred by the unrestrained Arbaki militiamen to avenge the killing of their two commanders in ‘Angoat’ area in the suburbs of central city of ‘Saripul’ province. This incident resulted in severe clashes between civilian people and these Arbaki militiamen, in which, twenty innocent people, including women and children, were martyred in the indiscriminate firing of Arbakis. It is reported that later, several houses of these civilian people were first looted and then put on fire by these vicious Arbaki militiamen.

On Sunday 28th February, four children belonging to one family were injured and another one was martyred in the random mortar shelling of internal incompetent soldiers in ‘Siri’ village of ‘Marawara’ district in ‘Kunar’ province.