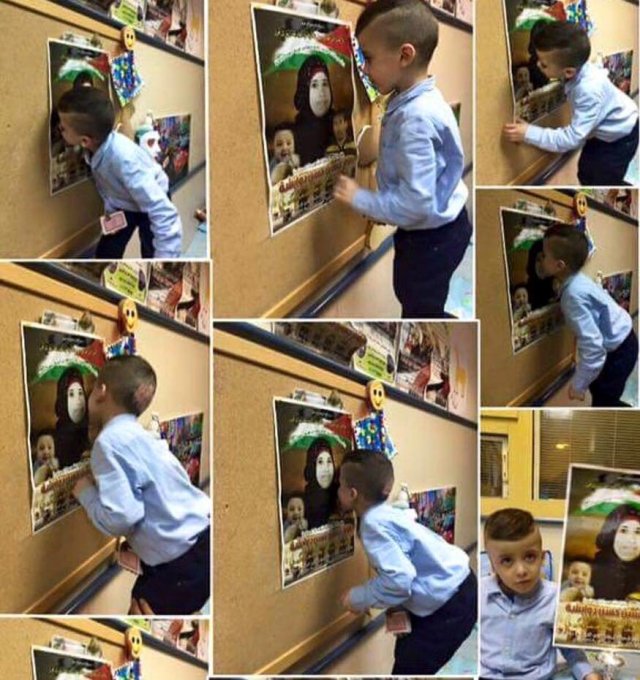 Ahmed will never feel the arms of his mother Reham hold him again. He will never play games with his brother Ali or share experiences with his father Sa’ad. All died after their home in the West Bank village of Duma was set alight by extremist Jewish settlers. The Independent reported, “Sa’ad, managed to get his wife, Reham, and four-year-old son Ahmed out of the building, witnesses told reporters he was unable to find the youngest as there was no electricity.” Ali was burnt alive, Sa’ad and his wife later died in hospital. For Ahmed who also suffered burns it is a long journey to recovery and dealing with the terrible loss of his family which will never heal. See following link for full story.

The photo of Ahmed was shared by Dr Basem Naim as part of “Israeli Apartheid Week” whose website states,

Inspired by the ongoing popular resistance across historic Palestine, we hope to make Israeli Apartheid Week 2016 a powerful contribution to the Palestinian struggle for freedom and justice.

Please join us in making the the 12th Israeli Apartheid Week one of the biggest yet.”

This year London BDS activists drew the attention of Israeli authorities with a series of posters plastered all over the London Tube, see following link,

According to RT, Israel Prime Minister Benjamin Netanyahu “reportedly phoned London Mayor Boris Johnson to tell him that the ad campaign would not tolerated by the Israeli government. Johnson assured Lapid that the signs would be taken down. He apparently complied late Tuesday afternoon and the posters have being removed.” However by then the posters would have been seen by hundreds of thousands of people.

“Its an annual series of university lectures and rallies against the Israeli occupation of the West Bank and Gaza. The series is held in February or March. According to the organization, “the aim of IAW is to educate people about the nature of Israel as an apartheid system and to build Boycott, Divestment and Sanctions (BDS) campaigns as part of a growing global BDS movement.” Since IAW began in Toronto in 2005, it has since spread to at least 55 cities around the world including locations in Australia, Austria, Brazil, Botswana, Canada, France, Germany, India, Italy, Japan, Jordan, South Korea, Malaysia, Mexico, Norway, Palestine, South Africa, the United Kingdom, and the United States.

Israeli Apartheid Week has garnered much controversy since its inception and has been criticized by some political figures as anti-Israeli and by some others as anti-Semitic.”

“Britain condemned by Palestinian activist over BDS clamp down”

“Battle for BDS (Boycott, Divestment and Sanctions, stand up for Palestine)

“Elbit gets the elbow from Brazil, pro-Palestinian BDS protesters claim another success”