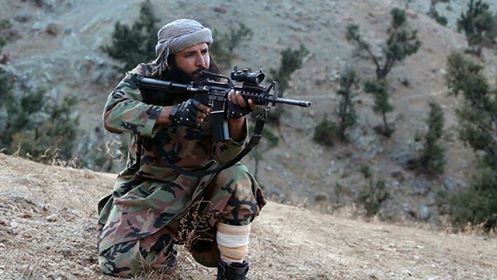 “I love my country, I am not its enemy, nor to its citizens. I just want change. An Islamic system in all respects, that’s all. I love my nation and country.”

Despite the efforts of the military to rid the Federally Administered Tribal Areas (FATA) within Pakistan of insurgent groups, some still survive and flourish. It is for this reason that US President Donald Trump attacked the Pakistani government on New Year’s Day 2018 with the following tweet, his first of the year, “the United States has foolishly given Pakistan more than 33 billion dollars in aid over the last 15 years, and nothing but lies and deceit, thinking of our leaders as fools. They give safe haven to the terrorists we hunt in Afghanistan, with little help. No more.”  The US has long sought tougher action against the Taliban and Haqqani network and has now suspended around $2 billion in aid as a response to Trump’s claims.

The criticism from Trump has not gone down well with the government and armed forces who launched operation Zarb-e-Azb (sharp strike, referring to a sword of the Prophet Muhammad PBUH) on 15 June 2014 in North Waziristan against militants along the Afghanistan/Pakistan border. This followed an attack on Jinnah International airport on the 8th June 2014.

However the clearing of “sanctuaries” is often disputed and despite displacing the civilian population of North Waziristan to carry out Zarb-e-Azb it was deemed necessary to follow this with Operation Radd-ul-Fasaad (Elimination of strife) in February 2017.

Now a new video has been released by a “thorn in the side” of the Pakistan government and military, Senior Tehreek-e-Taliban (TTP) commander Adnan Rasheed who was linked to an assassination attempt on President Pervez Musharraf in 2003 for which he was awarded the death sentence in 2005. Rasheed was sprung from his death cell in Bannu Central Jail, in Southern Khyber Pakhtunkhwa on 15th April 2012 along with nearly 400 other prisoners. The attack was carried out by 200 heavily armed TTP militants assisted by Uzbek mujahideen with the attack filmed as it happened. After release, Rasheed went on to head up a Taliban unit Ansar Al-Aseer tasked with freeing prisoners and was later linked to the Dera Ismail Khan jailbreak on 30th July 2014 where 175 prisoners were freed including 35 high-profile militants. He was also alleged by some media to be the mastermind behind the Karachi airport attack.

Rasheed, an ethic Pastun, is also known internationally for his letter to teenage education activist Malala Yousafzai (from the same tribal group) who was shot in the head by TTP operatives alleging in a statement she had maligned Islam and Shariah. Rasheed who was in prison at the time of the attack expressed his shock at the incident which raised international condemnation and stated that he wished it hadn’t happened. He encouraged Malala to return to Pakistan to study under the Islamic system of education.

Looking back at the history of the militant once labelled Pakistan’s most wanted man, Rasheed claimed to have been “turned” by senior offices whilst working as a Junior Technician in the Pakistan Air Force. Writing on his road to jihad in Azan, he alleged he joined a clandestine group within PAF under the name Idara Tul Pakistan (Institution of Pakistan) set up to recruit jihadis from the Army, Navy and Air Force. Amongst other allegations are that his superior granted him four months training leave to participate in a Jaish training camp in Mansehra district, Khyber Pakhtunkhwa.

It comes as no surprise then that America often claims Pakistan is playing “a double game”. On 3rd January, CNN  quoted the US Ambassador to the United Nations Nikki Haley as saying, “they work with us at times, and they also harbour the terrorists that attack our troops in Afghanistan… that game is not acceptable to this administration.” In turn many in Afghanistan and Pakistan say it is the US and allies that are the “terrorists”, occupying Afghanistan, inciting more violence through endless war and bombing and droning the civilian population.

Rasheed expresses an allegiance to TTP who helped rescue him from prison however was not linked to the shocking attack on Army Public School massacre in Peshawar in 2014  and has expressed his concern regarding civilian casualties during some operations. It appears there are multiple groups working under the umbrella of TTP some of which may operate independently of the main body.

In the latest video from Umar Media which was swiftly removed from social media, Tehreek-e-Taliban Pakistan’s (TTP) special forces are seen in training and working with new recruits which includes karate and target practice. Rasheed takes an oath of allegiance for TTP Ameer Molana Fazlullah from the newly trained sniper shooters.

Rasheed recently referred his followers back to predictions he made in 2014 when writing in Azan magazine and issued the following piece claiming “old is gold”,

AZAN MAG 2014 The magazine contains an article titled “Is Pakistan going to be sandwiched?” and written by former Pakistan Air Force (PAF) technician and Pakistani Taliban commander Adnan Rasheed who narrates his experiences with interrogators from the Pakistani military’s Inter-Services Intelligence (ISI) and calls upon Pakistanis to support the jihad launched by the mujahideen. The article was meant to warn that Pakistan could be sandwiched between Afghanistan and India under new leaders elected in 2014. Rasheed’s article was written sometime soon after India’s nationalist leader Narendra Modi emerged victorious in May 2014 and emerging trends indicated that Dr. Abdullah Abdullah was headed to win the Afghan presidential elections, which were later deadlocked due to corruption from rivals. In the article, Rasheed reveals that his interrogators told him Dr. Abdullah was an agent of Israeli intelligence Mossad and India intelligence RAW. Adnan Rasheed, who was famously freed in April 2012 when hundreds of the Taliban militant raided a jail in the Pakistani town of Bannu and recent media reports about his arrest by Pakistani military from South Waziristan were denied, describes the Pakistan Army as a “rental army” working for America and calls upon Pakistanis to support the jihadists, stating: “This is the main difference between the vision of this rental army and the mujahideen; the rental army is only concerned about themselves [i.e. getting their salaries from the U.S.], whereas the mujahideen are concerned about the whole Ummah. Oh people of Pakistan! Please open your eyes! Help, support and join hands with the mujahideen, your true friends! We love you all.”

Rasheed claims to have been granted permission to open a new media link named “Takbeer Media”… He has previously made numerous attempts on video to call Pakistani Armed Forces personnel to Allah, to serve Islam as opposed to what he sees as prioritizing foreign interests. One of these productions was his “Repent, Revise and Revolt” video in 2015 (see Links section). In past contact with media, Rasheed expressed a wish to “make dawah to Armed Forces of Pakistan” saying, “I love my country, I am not its enemy, nor to its citizens. I just want change. An Islamic system in all respects, that’s all. I love my nation and country.”

The cost of serving US interests certainly comes at a high price. In a sobering response to Trump’s recent criticism of Pakistan, Senator Sehar Kamran launched a counter-attack on the President declaring, “Pakistan cannot be bullied into the US’s bidding anymore”. The Financial Daily reported, “Pakistan has paid the biggest price in the war against terrorism with the lives of more than 70,000 of its citizens and military officers, as well as suffered heavy financial losses of more than $100 billion dollars. She opined that the social fabric of the country has been damaged severely due to this war, impacting all sectors and segments of society.”

Carol Anne Grayson is an independent writer/researcher on global health/human rights/WOT and is Executive Producer of the Oscar nominated, Incident in New Baghdad. She is a former Registered Mental Nurse with a Masters in Gender Culture and Development. Carol was awarded the ESRC, Michael Young Prize for Research 2009, and the COTT ‘Action = Life’ Human Rights Award’ for “upholding truth and justice”. She is also a survivor of US “collateral damage”.