Former Ex-Vice President of America, Dick Cheney, labelled them as the “worst of the worst”. They were detained without charge and trial in one of today’s most notorious prisons. The prison guards of Guantanamo believed they were guarding the most dangerous terrorists. This evening, three of those “terrorists” sat with one of those guards, enjoying a mixed grill platter and chips. If that wasn’t radical enough, we were in a Muslim area at a halal restaurant. How extreme is that!!

Honestly, if you just turn off the TV, think for yourselves, stop listening and falling for career politicians, ignore the bigoted, racist, Islamophobic and xenophobic leaders, then maybe you will see things clearly. Respect and unity is such a powerful thing. I couldn’t imagine Albert (prison guard) thinking that years down the line he would be chilling with Moazzam Begg and other prisoners having steak and chips. And vice versa. It was great seeing these guys having a good time. May Allah bless them all. 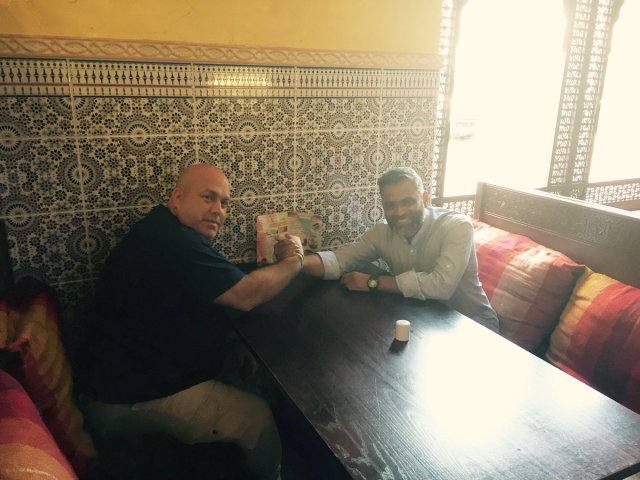 Ex-US soldier who guarded me in #Gitmo just stayed with me & met my family. This time I had the keys #TheConfession

Carol Anne Grayson is an independent writer/researcher on global health/human rights/WOT and is Executive Producer of the Oscar nominated, Incident in New Baghdad . She is a Registered Mental Nurse with a Masters in Gender Culture and Development. Carol was awarded the ESRC, Michael Young Prize for Research 2009, and the COTT ‘Action = Life’ Human Rights Award’ for “upholding truth and justice”. She is also a survivor of US “collateral damage”