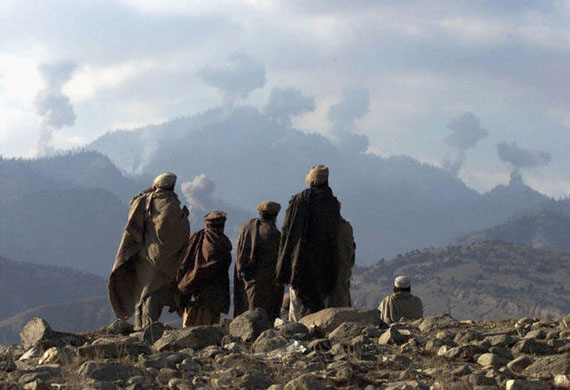 Thirty six years ago on 6th of Jaddi 1358 Solar Hijri (24 December 1979) Afghanistan was invaded by the Red army and Afghanistan entered a dark era. Hundreds of thousands were killed, injured and disabled, displaced, and orphaned. Many lost their parents or children. Whole tribes were displaced, villages levelled, cities plundered and provinces scorched. As a result of Soviet Union’s arrogance the destiny of an entire nation was changed forever.

After ten years of a valiant resistance in the winter of 1367 (Solar Hijri) the Red army admitted its defeat and having lost thousands of their troops they left Afghanistan on the 23rd of Dalwa (15 February 1989). Thus the Afghan nation shattered the pride of the mighty Soviet Union and showed the world that pride always cometh before the fall.

Alas the so-called leaders of the Jihad movement at the time had little interest in setting up a functioning government and fulfilling the aspirations of the Afghan nation. Instead they let the fruits of Afghanistan’s Jihad rot away while they distributed the seats of power amongst themselves. Even then they were not content with the spoils they received and instead plunged our nation into a destructive civil war. Communists, Jihadists and Secularists formed and broke alliances at will with no other purposes than increase their share of the spoils.

And so the true sons of our nation and Jihad, repulsed at the impertinence of their so-called leaders rallied around the banner of the Islamic Emirate to bring peace and prosperity to their nation. These warriors began their campaign to disarm all militias in Afghanistan and establish an Islamic and just government. The Machiavellian politicians in Kabul, instead of embracing this opportunity to set aside their differences and help the Islamic Emirate, attacked it with vehement ferocity and did all in their powers to impede its progress.

These politicians, who until yesterday had been leading the campaign against the Soviets now readily embraced Russia, India, France and anyone else that cared to lend them a hand in order to resist the march of the Islamic warriors. They held out Afghanistan in a silver platter ready to sell to the highest bidder.

And so when America entered the fray, these politicians readily embraced her, promising to sell our entire nation to them in exchange for a few days reign in Kabul. Politicians from all walks of life, who until yesterday claimed that it was their religious duty to fight the Islamic Emirate because the latter was stripping them of their rightful place in the political specter now jumped on the American bandwagon hoping they would also receive some bread crumbs.

It must be true that politicians have amnesia because America and her allies so soon forgot the plight of the Soviet Union a decade earlier. They forgot that Afghanistan is a land that is easier invaded than occupied. Its towering mountains look like an easy military prize but once in you realize than this land is like a quagmire, the harder you resist the deeper you sink. The Soviets were clever in that having realized that they could never completely subdue its people, they cut their losses and completely withdrew from Afghanistan.

The Americans also know fully well that they can never subdue Afghanistan but they insist on hitting their heads against the wall hoping that sooner or later the wall might crumble. While their best case scenario would be to effect a face-saving retreat from here, yet it will likely come at great cost to them. Their sons will continue to die until they realize that sometimes you are better off to just quit and run.