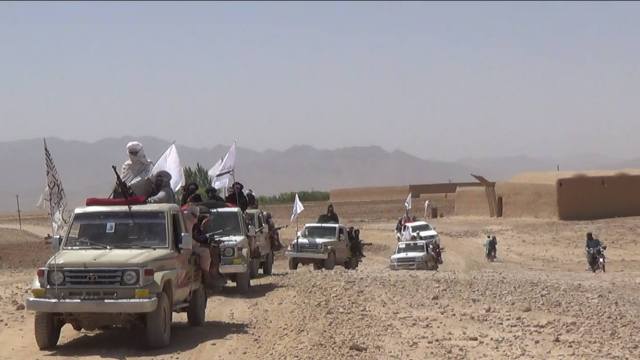 To achieve its vitality and objective, every struggle goes through different phases during its toil and tussle, taken from birth to growth and then achieving eventual aims and objectives.

The ongoing Jihad inside Afghanistan has gone through all these phases over the last fourteen years of its struggle against the world infidel powers.

This Jihadi struggle was launched in its embryonic phase against the unilateral, illegitimate and brutal occupation of western invaders. Initially, it meant only the survival of Jihad and existence of a limited number of Mujahidin, who jeopardized their lives in the darkest nights and warmest days for the sake of rejuvenating this Jihadi struggle through invitations, motivations and a few symbolic operations against the enemy.

Initially, the proper treatment of injured persons and affordability of offensive operations were painstaking tasks for Mujahidin therefore they resorted only to remote control mines against the foreign invaders as well as their internal stooge forces.

With the passage of time, Jihadi operations became echoing as they emerged from the obscurity of nights into the broad day lights. Mujahidin launched their operations as the vulnerable centres and check-posts of the enemy were brought under direct ground and missile attacks and our Jihadi struggle entered into a new phase.

A vital phase among the evolutionary stages of Jihad during last fourteen years was the control of villages and mostly rural areas throughout the country by Mujahidin. This phase lasted for several years and the enemy, both foreign invaders and their internal mercenary forces, tried their best to halt this process by launching huge operations, brutal night raids and indiscriminate bombardment, blind drone strikes and formation of notorious Arbaki militia but all in-vain. And eventually Mujahidin managed successfully to tighten their control and increase their influence and presence in rural and suburban areas in different provinces of all zones of Afghanistan.

At the zenith of this stage, geographically vast areas came under Mujahidin’s control and the enemy was confined and restricted to the centres of administrative unites, key military bases and to some extent only to the main highways of the country.

In the wake of ‘Azm’ (i.e. Resolve) Jihadi operations launched in the spring of last year, our struggle entered an entirely different and extraordinary phase in which tens of districts were captured and liberated from the stooge enemy throughout the country.

Previously the collapse of even a single military post was considered a humiliation for the arrogant enemy especially the foreign invaders assumed it an embarrassment for their might and supremacy and they used to do their utmost for regaining the areas lost. And one of the great achievements of successful ‘Azm’ Jihadi operations is that now the enemy has become used to losing districts one by one sometimes several per week. Most of these districts are completely evacuated by the enemy. Having lost the courage to defend the districts and having left with no other option for concealing humiliation, the defeated and embarrassed enemy has now resorted to shifting the centres of these lost districts to other places which are comparatively safer for them.

For instance four vast districts in ‘Ghazni’ province were completely conquered and liberated by Mujahidin of the Islamic Emirate but the so called administrative centres of these districts were reopened by the stooge regime of Kabul in the capital city of this province. Similarly a few days earlier ‘Kharwar’ district of ‘Logar’ province was liberated by Mujahidin but the enemy announced that the centre of this district will remain operational in ‘Khwaja Angur’ area of ‘Charkh’ district situated in ‘Logar’ province.

Likewise remedy was sought by the stooge enemy in Farah, Badakhshan and Helmand provinces after losing control of several districts in these areas. It is deducible that after liberating numerous districts, if some provincial capital is captured by Mujahidin perhaps the puppet regime might inaugurate the administration of that lost province inside Kabul too. Verily this approach of the stooge enemy reveals their utter ineptitude and impending collapse.

In brief we can summarize the specifications and achievements of current Jihadi operations in the following points:

Nevertheless this new phase of Jihadi process is quite significant and decisive which identifies the rise of Jihadi movement and the decline of both the foreign invaders as well as the stooge enemy. We sincerely pray to Allah Almighty that like all previous phases, this phase of our holy struggle may succeed and result in the overwhelming victory and liberation of our country and the restoration of divine Islamic Sharia here!!!