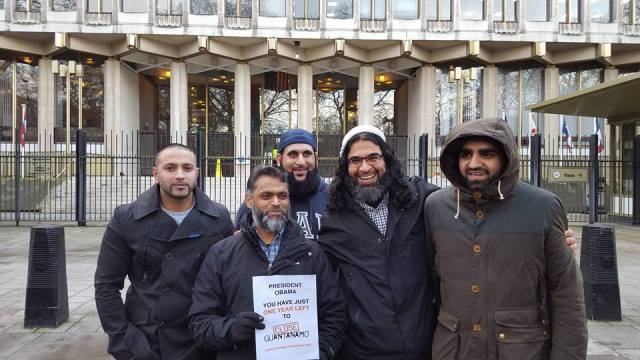 Former Guantanamo detainees, Moazzam Begg, Shafiq Rasul, Asif Iqbal and Ruhal Ahmed meet Shaker Aamer outside the US Embassy, in London with John McDonnell MP (not on photo), ahead of tonight’s vigil. (Via Save Shaker)

A day some thought might never happen, Shaker Aamer former Guantanamo “hostage” as he prefers to be called joining other “brothers” who were detained for years without trial to call for the closure of Guantanamo on the 14th anniversary of the opening of one of the most controversial places on the planet. Former detainees that will be present are as follows, Ruhal Ahmad, Tarek Dergoul, Asif Iqbal, Shafiq Rasul and Bishar al-Rawi.

Gitmo has become a byword for human rights abuses and its existence promoting indefinate detention, solitary confinement, force-feeding and alleged torture has incited the same extremism and terrorism that it was set up to address.

Huffington Post reports, President Obama “has said the facility has been used as a recruiting tool in propaganda from groups like al Qaeda, and also is far too costly to maintain. There are 104 detainees left at the prison.” This is indeed correct and let’s not forget Islamic State and Taliban that have also repeatedly highlighted Gitmo in their statements to press.

The orange jumpsuits worn by those held in Guantanamo have been used to hideous effect on Islamic State videos that often “copycat” actions of US and allies on Muslims around the world. Obama pledged to close down the military prison during the 2008 presidential election campaign but appeared to have gone back on his promise, however there may be renewed hope he will follow through with concrete action. Time reported White House Chief of Staff Denis McDonough who said,

“he (Obama) feels an obligation to his successor to close that, and that’s why we’re going to do it… The president just said he’s going to present a plan to Congress and work with Congress and then we’ll make some final determination.”

Those who were once held at Gitmo and their supporters are determined to make sure this happens. Today the London Guantanamo Campaign released a statement. The organization was set up in 2006 and campaigns for justice for all prisoners at Guantánamo Bay, for the closure of this and other secret prisons, and an end to the practice of extraordinary rendition. Since 2008, the London Guantánamo Campaign has each year been the sole organiser of the UK protest to mark the anniversary of Guantánamo Bay opening on 11 January 2002.

The London Guantánamo Campaign [1] and human rights activists will gather for a candlelight vigil, History in the Making [2], outside the US Embassy in Grosvenor Square, London, from 6-8pm, to mark the 14th anniversary of the opening of the Guantánamo Bay prison camp.

Activists will stand outside the US Embassy holding up letters spelling out: “Close Guantánamo” and will hold a candlelight vigil calling for Barack Obama to fulfil his promise to close the prison camp during his last year in office.

Aisha Maniar, organiser from the London Guantánamo Campaign, says, “When Barack Obama became US president in 2009, he promised to close Guantánamo within one year. Now, with one year left of his term in office, there are still over 100 prisoners. Almost all are held without charge or trial after 14 years.

“While recent prisoner releases are welcome, most of these have been subject to inexplicable delay. This includes the release of British resident Shaker Aamer more than 8 years after he was cleared and the British Prime Minister sought his return.

“Obama no longer plans to end indefinite arbitrary detention for the remaining prisoners, and his plan to close Guantánamo merely involves displacing this extralegal regime, moving the prisoners elsewhere. This is extremely disappointing from a man who once made closing Guantánamo and restoring the rule of law one of his main pledges if he became president. None can be as disappointed as the remaining prisoners, who still have no guarantees they will ever be released or even know why they are held.” 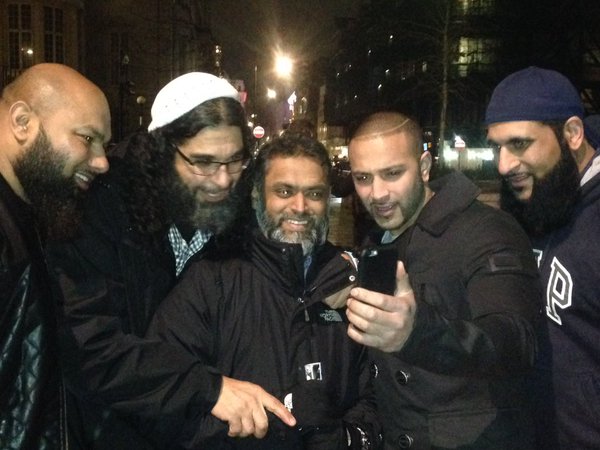 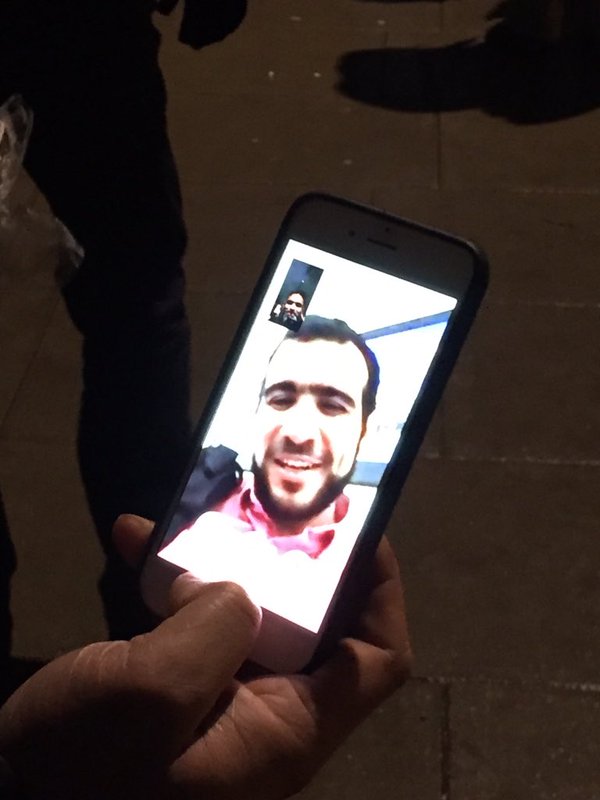 CAGE is another organization that wants to see Gitmo shut down and that has been campaigning against the War on Terror for more than a decade. It is an independent advocacy organisation with a focus on empowering communities. Cage’s role has focused on working with survivors of abuse and mistreatment across the globe including those released from Guantanamo. They issued the following statement,

DATE:      Monday January 11th, 2016
TIME:       3pm* (interviews/photo opps also available between 6-8pm**)
PLACE:     US Embassy, 24 Grosvenor Square, London W1A 2LQ
EVENT:
On the 14th anniversary of the opening of Guantanamo Bay, 7 former British hostages will gather outside the US embassy in London to call for the closure of the infamous detention centre.
They will include Shaker Aamer who was freed in October 2015 after being incarcerated for 14 years without evidence, charge or trial. He was initially imprisoned at an American base in Afghanistan before his transfer to Guantanamo and, since his release, has spoken of the unimaginable torture and psychological abuse he suffered in both detention centres.
In an unprecedented show of public unity, Shaker will be joined by former detainees including Moazzam Begg and Ruhal Ahmed. It will be an emotional first meeting for the men who have never before met to share their experiences of imprisonment at Guantanamo with Shaker. Its an historical moment as this is the largest gathering of former detainees to protest the prison.
The London vigil (***organised by London Guantanamo campaign) coincides with a demonstration outside the White House on Monday when campaigners will be urging President Obama – who has referred to the prison as both a recruiting tool for extremists and a stain on America’s reputation – to overcome opposition and honour the commitment he made on Day 1 of his administration to close Guantanamo within a year.
The Washington protest is being organised by campaign groups including Witness Against Torture. They will be using a giant inflatable effigy of Shaker who has pledged to devote his life to campaigning for the closure of Guantanamo. As an ex detainee, he is banned from entering the US.
Andy Worthington, Co-Director of the We Stand With Shaker campaign which worked to secure his release, flew to the US with the effigy last week to join the demonstration.
Shaker says: “Even though I’ve been free for three months, I haven’t yet seen my fellow hostages from Guantanamo. This will be a momentous day when we gather for the first time to fulfil our ambition to see the closure of the prison and justice for our brothers still held there.”
“I look forward to standing with everyone – all the brothers, my MP supporters and freedom campaigners – on this extremely important mission of closing Guantanamo before President Obama leaves office. They might not let us come to America in person but they can’t stop our spirit and our message from reaching the American public and the rest of the world”
More than 100 detainees are still imprisoned at Guantanamo seven years after President Obama’s promise to shut it down.
Witness Against Torture spokesman Jeremy Varon said: “Now is the time for Obama to accomplish a central goal of his administration by closing Guantánamo. There is today a renewed climate of fear and hate reminiscent of the post-September 11 mindset that led to torture and indefinite detention in the first place. Guantánamo is the bitter legacy of a politics of fear, which must be rejected.” 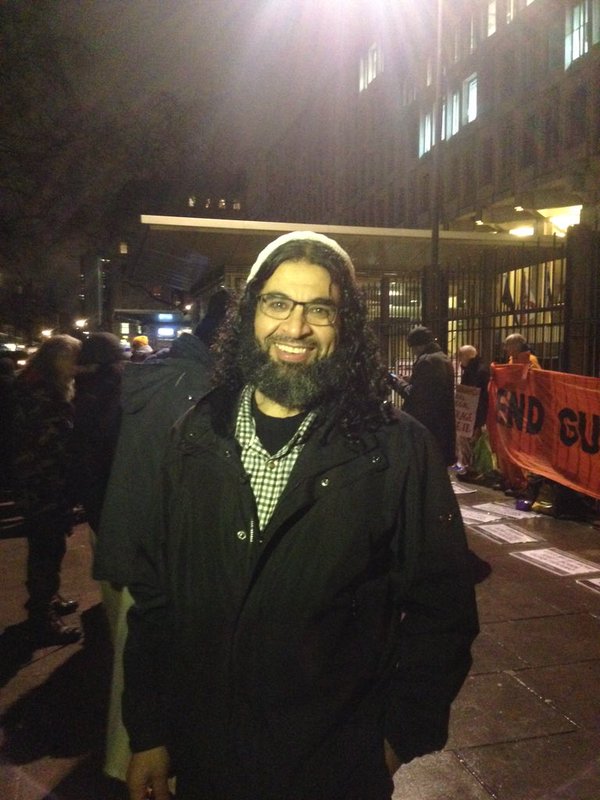 A protest is also being held outside the White House to coordinate with the London event, (Image via We Stand With Shaker) see following link,

Protest in Uruguay (Image, We Stand With Shaker)

We Stand With Shaker statement,

Today is the 14th anniversary of the opening of Guantanamo prison. Please join us in Washington, London or Uruguay!!

Washington:
protest is at White House from Noon. Our campaign co-director Andy Worthington will be there with American human rights groups including Witness Against Torture. He’ll be wrangling with the Shaker inflatable symbolically taking Shaker’s message to America. They’ve printed photos of all the men still held.

London:
Shaker urges you to join him and 6 other British former hostages (detainees) at the US embassy. Its a great opportunity to support him and hear him speak. He’ll be meeting some of his brothers for the first time since Guantanamo. Vigil take place from 6-8pm at US embassy, Grosvenor sq.