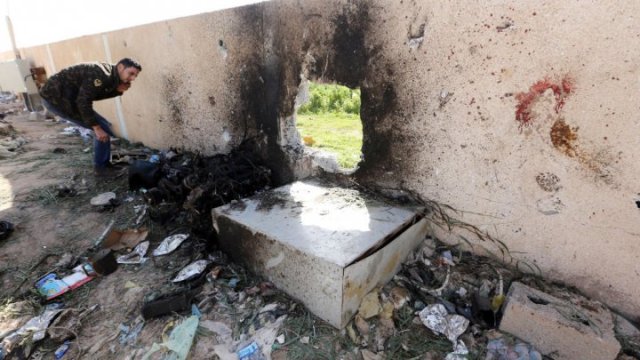 A Libyan man inspects the site of a suicide truck bombing near a police academy in Libya’s coastal city of Zliten, on January 7, 2016 (Image, Mahmud Turkia, AFP)

Islamic State (IS) have released a statement claiming responsibility for a truck bomb at the al-Jahfal training camp Zliten, Libya on Thursday which killed over 50 at the police base, injuring a further 118 people. Wilayat Trablous were named as the group responsible. IS says it also carried out another attack on the same day at the oil port of Ras Lanuf, which killed seven people.

New York Times reported, “the attackers drove a water truck filled with explosives through the camp’s gates before detonating the explosives in the camp’s yard, which was packed with cadets” according to security officer Capt. Adel Erhoma.

The BBC highlighted a Libyan media statement that said, “hundreds of recruits were outside performing morning exercises when the centre was targeted” pointing out that the incident “comes against the backdrop of intensified attacks this week carried out by IS militants near Libya’s eastern oil ports.”

IS now governs Sirte, the city on Libya’s Mediterranean coast which has led to neighbouring Tunisia building a security wall along one third of its border in an effort to protect the country. As well as an eye on controlling the oilfields, IS is also focused on taking their fight to Rome see following article on growth of Islamic State in the region,

There was dismay and anger at what some Libyans saw as indifference to the country’s suffering in relation to the latest attack.

Can’t seem to understand why no one is batting an eye over this. 47 dead and an attack on the future of Libya #RIP

Mary Fitzgerald who reports and researches in Libya tweeted,

“strongly condemns this criminal act and expresses its sincere condolences and sympathy to the families of the victims and wishes of speedy recovery to the injured.”