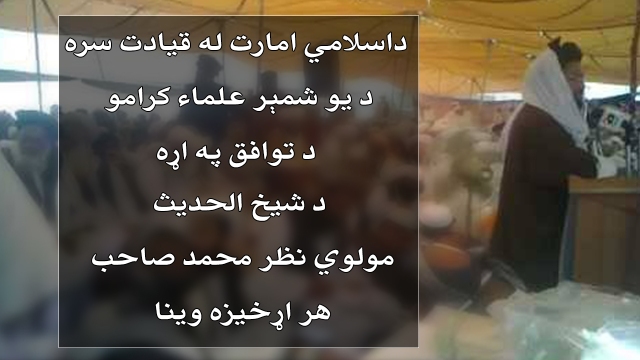 It is with great joy that news has been received that those respected Ulama who had some disagreements in the past attended a gathering headed by deputy Amir of Islamic Emirate Sheikh ul Hadith Mawlawi Haibatullah Akhundzada alongside many scholars of the country. This gathering which was held in an atmosphere of love and brotherhood ended in complete agreement and unity among all the scholars.

The respected scholars congratulated all the Mujahideen about this blessed unified agreement. Sheikh ul Hadith Mawlawi Nazar Muhammad Sahib talked about the complete details of this gathering and agreements which can be downloaded from the link provided below:

Carol Anne Grayson is an independent writer/researcher on global health/human  rights and is Executive Producer of the Oscar nominated, Incident in New Baghdad . She is a Registered Mental Nurse with a Masters in Gender Culture and Development. Carol was awarded the ESRC, Michael Young Prize for Research 2009, and the COTT ‘Action = Life’ Human Rights Award’ for “upholding truth and justice”. She is also a survivor of US “collateral damage”.