Islamic Emirate: A review of Jihadi Progress in 2015 (Part One) 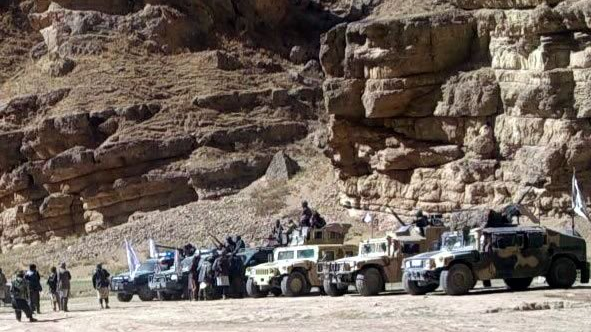 Another year of Jihad against the foreign occupation has elapsed. Over the last fourteen years, 2015 can be labelled as one of the most successful and inspiring Jihadi year which was fraught with numerous significant and sometimes unanticipated achievements in its fold. To encompass all the political, military, social and cultural activities in this one article is a painstaking task therefore we will only confine ourselves to the crucial Jihadi incidents, successes and conquest.

Beginning of the Year

Fortunately 2015 was full of great successes for Mujahidin. January, the very first month of this year, which is usually known for the reduction of Jihadi attacks due to adverse weather conditions and as every year, the amount of Jihadi operations come down to their minimum during this month but this year, it had the following significant incidents and achievements in its wake:

On Sunday 4th January, two major commanders of the unrestrained Arbaki militiamen were killed. One was called ‘Khalil’, the head of Baraki Barak district Arbakis and the second one was the crime officer of Qara-Bagh district in Ghazni province.

On the following day, Monday 5th January, several foreign soldiers were killed in a successful martyrdom attacks of Mujahidin in ninth police district of the capital Kabul city and near Jalalabad airbase, in the eastern part of the country.

On Tuesday 6th January, Mujahidin of the Islamic Emirate launched large scale attacks in Badakhshan province in the north east of the country.

On Wednesday 7th January, a successful martyrdom attack was carried out on the police academy in Khost province in the east. Similarly twelve stooge soldiers were killed and twelve others surrendered in the central Baghlan province.

On Sunday 11th January, the convoy of governor of Paktika province was brought under attack resulting in casualties and losses for the enemy.

On Monday 12th January, the security commander of Mizana’district in Zabul province was killed. In another significant incident, an infiltrated Mujahid policeman managed to kill all district officials and workers including their commander in Nowzad district of Helmand province.

On Wednesday 14th January, the security commander and head of anti-crime department of Almar district in Faryab province were killed.

On Sunday 18th January, a successful martyrdom attack was carried out on policemen in Lashkargah city, the capital of Helmand province.

In addition to minor assaults, blasts and targeted attacks, huge operations against the internal and external enemies were incessant which increased day by day resulting in great conquests and liberations of vast areas.

Conquered areas, districts and bases of the enemy

A significant success of Mujahidin in 2015 from a military point of view was that for the first time several military posts, bases and districts were liberated from the enemy. Consequently Mujahidin got control of vast areas by the grace of Almighty Allah. In the following lines, brief information about these areas is provided:

In the whole span of 2015, Mujahidin conquered and liberated thirty four districts throughout the country in addition to the capital of ‘Kunduz’ province and most of these districts are still under their control while some of them have been retaken by the enemy. Names of the districts controlled by Mujahidin are as follow:

In addition to the above mentioned conquests, the most significant incident of the year took place on Saturday 28th September as the capital city of Kunduz province, the sixth largest city of the country, came under Mujahidin control. The governor office, central command, main castle, all directorates with the exception of some installations at the airport and entire city remained under the control of Mujahidin for one and a half week. Later, to avoid the civilian casualties and civil destruction due to the indiscriminate and brutal bombardment of the foreign invaders, Mujahidin decided to withdraw from the city.

In the wake of this significant conquest, Mujahidin broke the central jail of this province and liberated a large number of their own colleagues as well as other innocent prisoners. They took possession of secret documents of the national security department and a huge amount of light and heavy weapons and several vehicles of ammunition were also seized. Though the Mujahidin of the Islamic Emirate did not disclose the exact amount of their gains due to military restrictions however the stooge admin admitted in a report provided by a fact finding mission which stated that thirty seven armoured vehicles, two T-62 Russian tanks and more than one thousand light weapons of the mercenary national army were missing including several night vision binoculars.

Like Kunduz, Mujahidin also managed to get so close to the centres of Ghazni, Zabul, Uruzgan and Ghor provinces that the officials of the stooge regime began fleeing in panic.

In addition to the above mentioned provincial centres, the capitals of Baghlan, Helmand and Faryab provinces remain only at a stone through away from Mujahidin of the Islamic Emirate.

Inside Kunduz province, Char-Dara, Gor-Tepa, Qala-Zal, Imam-Sahib, Dasht-i-Archi, Ali-Abad and some areas of Khan-Abad districts were completely liberated from the malicious Arbaki militiamen. In this way we can say that Mujahidin prevailed in most areas of Kunduz province that’s why they managed to bring the centre of this province under their control. In the Markazi Baghlan district of Baghlan province, several police posts and military bases were conquered and destroyed. In Dahna-Ghori district, three battalions and several other posts were captured.  In the suburbs of the capital Pul-i-Khumri, several villages and areas were liberated. Similarly vast areas in Tala-o-Barfak, Dand-i-Ghori and Burka districts of Baghlan province were freed from the enemy.

Warduj, Raghistan, Jurm, Argo, Yamgan and Baharak districts of Badakhshan province, tens of military posts and several battalions of the mercenary army were conquered and destroyed by Mujahidin. Consequently all routes between these districts were restored, areas were freed and Mujahidin’s influence was increased.

In addition to the conquest of Nowzad, Musa-Kala, Sangin and Khanashin districts in Helmand province, several other areas came under Mujahidin control as they entered Baba-Jee area in suburbs of the capital of Helmand province and the notorious Arbaki militiamen were driven away from the area. Great progress was made in the suburbs of Nad-Ali district. Shoraki, Qala-Gaz and Haidar-Abad areas in Grishk district of this province came under Mujahidin’s control. Only some posts of the enemy are left between Mirmandaw and Zunbuli areas. Similarly most areas of Deh-Adam-Kham are liberated.

In Marja and Kajaki districts of Helmand province only the centres are controlled by the enemy while all remaining areas are captured by Mujahidin. In briefly we can say that in Helmand province, Mujahidin are completely dominant,and the enemy is confined to Lashkargah city and some areas of Garam-Sair and Nawa districts only.

Another example of last year’s achievements was the rapid progress of Mujahidin in Uruzgan province. Though the capital city and district centres of this province are still under the regime control however the remaining areas which were the stronghold of notorious Arbaki militiamen are now completely freed from their malicious presence. During the span of last year, large areas, villages and valleys of Dehrawod, Char-Chino, Chura, Chinartu, Tarin-Kot and Khas-Uruzgan were cleared from Arbaki and police presence. A large number of Arbakis in this province surrendered through the ceaseless efforts of ‘Invitation and Guidance’ Commission of the Islamic Emirate. A well-known Arbaki commander named Abdul Samad who was a warmonger had to abscond from the area eventually. Another significant progress of 2015 in this area was that two police chiefs of this province ‘Matiullah’ and ‘Gulab Khan’ were killed by Mujahidin one after the other with an interval of very few days.

Faryab, Saripul, Badghis, Jozjan and Ghor provinces are another zone where vast areas were liberated from the enemy and captured by Mujahidin.

Jwand, Qadis and most areas of Sang-i-Atish districts in Badghis’province were freed from the stooge regime control.

All villages and areas of Dolina, Shahrak and Shinkot districts which were strongholds of government militiamen were liberated from their control as several groups of former government officials joined Mujahidin of the Islamic Emirate in those areas.

In addition to significant conquest of Kohistanat, the districts of Sang-Charak, Sheram and Sozma-Qala of Saripul province also fell in the hands of courageous Mujahidin and the notorious Arbaki militiamen were completely expelled from all these areas.

Besides the above mentioned achievements, vast areas in several other provinces which were formerly controlled either by the stooge national army or national police or the unrestrained Arbaki militiamen have been liberated by Mujahidin. In the following a sequence of areas names are provided which were either completely or to a large extent liberated from the enemy: