Kashmir under clampdown: Detentions, alleged “rent a crowd” for Modi visit and one youth dead

Today, (Saturday 7th November) Gowhar Ahmed Dar (22) was “critically injured” after allegedly being hit by a tear gas shell in Zainakote, Kashmir during protests against the visit of Prime Minister, Shri Narendra Modi. The people of Jammu and Kashmir have once again been subjected to a major clampdown and “curfew-like restrictions” to try to ensure the visit of the PM goes without a hitch. It was clear this was already failing.

There have been ongoing disputes in Kashmir since partition in 1947 when the Indian sub-continent was divided along religious lines leading to the formation of India and Pakistan. Since then a number of separatist movements have formed to fight for independence from India. 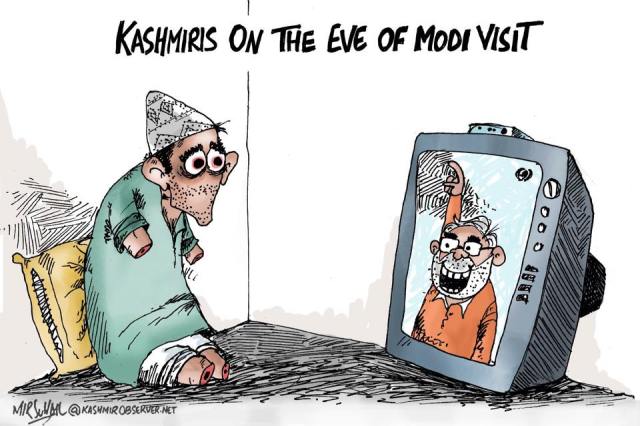 Prior to the event, mobile Internet services were reported as blocked in Srinagar with services suspended from 10 am till 2 pm. Separatist leaders and supporters were rounded up and detained. According to NDTV, Jammu and Kashmir lawmaker Engineer Rashid was detained  on Saturday morning “for holding a black balloon protest near the venue of Prime Minister Narendra Modi’s rally.” Security was  tightened with over 50 Facebook and Twitter pages blocked. In addition, entry and exit routes were sealed with “concertina wires” in Srinagar to thwart efforts by separatist groups to hold a counter-rally at the Tourist Reception Centre close to Sher-i-Kashmir cricket stadium.

PM Modi (who declared “India is not complete without Kashmiriyat”) arrived at Sher-e-Kashmir stadium, Srinagar, to announce a development package of eighty thousand crore rupees for the region. Modi spoke of his desire to see Kashmir as a tourist hub “like it was before” saying, “I have got the privilege to visit Jammu and Kashmir so often. This land draws me here.” Unfortunately for Modi, many Kashmiris are not welcoming his visit. Locals called the rally “fake” alleging that outsiders were transported reluctantly into Kashmir to boost his appearance. Some vehicles carrying “would be” participants were allegedly pelted with stones. Arshad Hussain told me, “virtually the whole Kashmiri nation is caged. Some pro Indian party workers, Indian labourers (that are nearly half a million there) made the Modi rally.”

Modi mantra is “Sabka Saath, Sabka” promoting that all parts of India must develop. He pledged $12 billion in relief and development funds and reminded the crowd of past support for flood victims saying, “my mother donated ₹ 5000 when there was flood in Kashmir.” He spoke of India being the “fastest growing economy in the world” and tried to tie in the importance of local industries such as the saffron and cashmere wool trade and the fact that “top Indian cricketers use bats made in Jammu and Kashmir.” Modi also highlighted the need to development infrastructure, saying, “we need highways. We also need i-ways.”

Ironies ran riot today. Modi talked of Information Superhighway and yet his minions block Internet at the drop of a hat #Kashmir

Kashmiri Life did not appear impressed with the Modi event reporting that the rally was attended by “workers of Peoples Democratic Party and non-local labourers besides BJP activists” with a significant number of labourers from Bihar, Punjab and Uttar Pradesh spotted at the SK Stadium at Sonawar. The publication stated that according to one report, “as the presence of migrant labourers drew attention of media, PDP workers shoved them to the back rows in the stadium.”

Kashmir Global reported the words of Manoj Kumar, a labourer from Bihar who claimed he was pressurized to attend the rally and had lost Rs 400 because he could not work. He said,

“I have been brought here forcibly from my rented room in Rambagh (area of the city).”

Today also saw the funeral of Gowhar Ahmed Dar the engineering student from Mustafabad who succumbed to his injuries. Arshad Hussain stated, Indian forces have killed a youth in Srinagar after people, while getting partially released from the water tight restrictions on Modi’s return to Delhi, started protesting.” There were also reports of massive clashes going on at Narbal District Budgam Kashmir CRPF camp, attacked after the killing of this young man.

According to Kashmir Million MARCH FB page, Hurriyat Conference (G) chairman Syed Ali Geelani (allegedly already under house arrest for several months) was detained with other leaders around 1pm on Saturday afternoon and taken to Humhama police station. He had organized a “Srinagar million march” to counter Modi’s rally. Earlier, Geelani claimed via local media that to sabotage the proposed program, the “’puppet state government’ on the ‘direction of Indian home ministry’ has started a massive process of arrests, raids and search operations in every nock and corner of the state.” He said,

“we are not scared of arrests and restrictions and we will continue with our ‘Srinagar Million March’ come what may.”

Geelani alleged that youths were being stripped of their clothes and subjected to severe custodial torture in Shargarh police station” adding “the police and administration is pushing the youths to the walls and instead of peaceful means, they are forced to adopt other options of resistance.” A further post by Kashmir Million MARCH alleged that, four students of Higher Secondary Surankote and Government Degree College were hospitalised in the lead-up to the rally after troops from army’s 25 RR (allegedly) thrashed them.” The students were objecting to the frisking of bags of female students.

“These types of directions and actions prove that the Indian government and their agents in Kashmir had virtually accepted their defeat and they are scared of facing the pro-freedom leadership of Kashmir on democratic front. India had never honoured the wishes and sentiments of the Kashmiri people and had always tried to quell the every peaceful voice of Kashmir which is raised against their illegal and forced occupation”

“Despite the strict restrictions, arrests, raids and other oppressive measures, our Million March program will definitely take its practical shape in any way and preparation with this regard is at its peak.”

The oppression of the Kashmiri people is set also within a wider context of what Rehman Anwer terms “India’s deep rooted bigotry” by Hindu extremists “against the Muslims in general and the Pakistanis in particular” see following link,

Indian author and activist Arundhati Roy who has often spoken out against abuses in Kashmir recently returned the national film award she won in 1989 for writing the screenplay of ‘In which Annie Gives it Those Ones’. She said she was “shocked” at the “growing intolerance” being fostered by the present government and drew attention to lynching, shooting, burning and mass murder of fellow human beings.” Roy stated,

“I am very pleased to have found (from somewhere way back in my past) a National Award that I can return, because it allows me to be a part of a political movement initiated by writers, filmmakers and academics in this country who have risen up against a kind of ideological viciousness and an assault on our collective IQ that will tear us apart and bury us very deep if we do not stand up to it now.”

Roy’s speech can be read on the following link,

The protests in Kashmir will not stop whatever the measures to curb them. The last word goes to Unidentified Kashmiri who tweeted,

“A brief history of the Kashmir conflict”

2 Responses to Kashmir under clampdown: Detentions, alleged “rent a crowd” for Modi visit and one youth dead