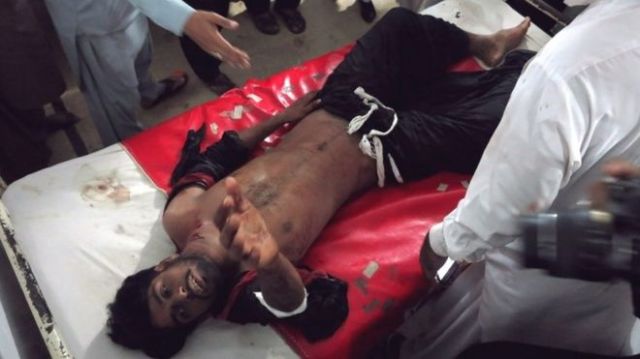 Dozens of people were wounded in Jacobabad (Image EPA)

Despite extra security measures put in place across Pakistan to help prevent attacks during Muharram, one of the four holy months of Islam and the beginning of the Islamic New Year. A suicide bomber was able to detonate explosives at a Shia procession killing at least 25 people including five children and injuring several others on Thursday according to officials. The incident occurred during a procession to commemorate martyrdom of Hazrat Imam Hussain (R.A)  on the Quetta Road in the Lashari Muhalla area of Jacobabad, Sindh. The following article explains,

Authorities had suspended mobile phone services in many cities across Pakistan and deployed “a heavy contingent of police and paramilitary troops” according to Samaa TV  but attackers were still able to reach their targets. Ban Ki-Moon condemned the incidents and as Dawn reported “urged the government to bring the perpetrators of the deadly attacks to justice” and “take all steps to protect its citizens belonging to both the majority and minority groups”. Two different teams are now being set up to investigate the attack, see following link,

The Jacobabad bombing comes shortly after a suicide attack targeted Shia sect of Islam at an imambargah (shrine) on Thursday in the Goth Chalghari area of Bolan, Balochistan which claimed the lives of 10 people. Dawn reported a man wearing a burqa blew himself up and according to Balochistan Home Minister Sarfraz Bugti. “there were six children between 10 and 12 years old among the dead and that some women had also died” with the death toll likely to rise. The BBC reported, “the Sunni Muslim militant group Lashkar-e-Jhangvi had claimed Thursday’s bombing in the Bolan district Balochistan and threatened more attacks against Shia”.

A bus was also attacked prior to this in Quetta where a bomb killed at least 11 people and wounded 22 others including 5 children. A policeman told the BBC “the device was planted on the roof of the vehicle”.