Islamic State (IS) Khorasan have sent media images of IS in Afghanistan allegedly breaking in to barracks of the Afghan military. They claim to have killed dozens of soldiers and have control of barracks in Nangarhar province in the eastern part of the country. This will come as another blow to the Afghan government who are now dealing with the well planned take-over of Kunduz City by the Taliban. See following link for full story,

This comes in a week which saw the US State Department add IS Khorasan to its official terror watch list, seen as an increasing threat to security in the region. The group is headed by former Tehreek-e Taliban Pakistan (TTP) commander Hafiz Saeed Khan. A number of former Pakistan and Afghan Taliban including a TTP spokesperson Shahidullah Shahid (also known as Shaykh Maqbool) defected at the back-end of 2014 and later gave allegiance to Abu Bakr al-Baghdadi, Caliph of Islamic State. See following link,

There have been a number of clashes between IS and the Taliban with the latter claiming recently to have driven IS out of Helmand province. Anger grew after a graphic video was released earlier this year showing Taliban supporters tied with explosives and blown up by IS (see Links section). However IS appear to have gained a foothold in Nangarhar province which shares a border with neighboring Federally Administered Tribal Areas (FATA) and the Khyber Pakhtunkhwa province of Pakistan.

The first one reads as “Breaking: 20 of the Afghan apostate army soldiers killed in a break- in on the barrack in Adal Khel area. Praise be to allah that the army of “khilafah” broke in to the barracks of Afghan Army in Adal Khel area of Asheen-Nangarhar and acquired the weapons and other supplies as war booty and killed the head of the barrack Sardar Wali.” 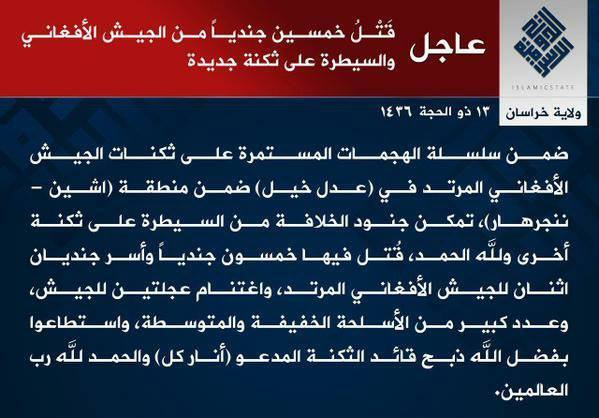 Second one reads “50 soldiers from the Afghan apostate army killed in another attack on a barrack. In the series of attacks on barracks of Afghan apostate army in Adal Khel (Asheen Nangarhar) the army of the “khilafah” gained control over another barrack in which 50 of the soldiers were killed and 2 were held captive. Other heavy medium and light weapons were taken as war booty and the head of the barrack who was called Anaarkal was beheaded.” 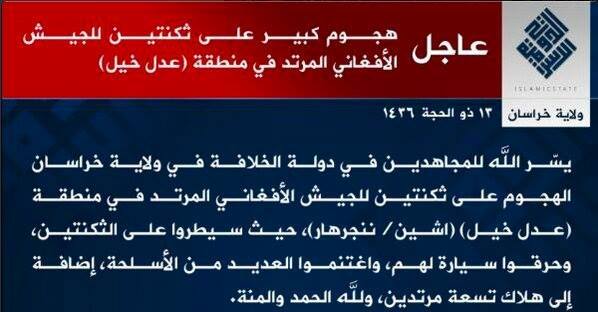 Third one reads “Breaking: massive attacks on two barracks of Afghan army in Adal Khel. Allah made it easy for the army of “khilafah” in Wilayat Khorasan to attack two barracks of the Afghan Army in Adal Khel (Asheen- Nangarhar) where they obtained control of the barracks, set their car ablaze and obtained numerous weapons as war booty added to that killing of 9 apostates.”

Islamic State Khorasan have sent media images of their militants allegedly breaking into Afghan military barracks killing what appear to be armed forces and allegedly taking control of barracks in Nangarhar area. 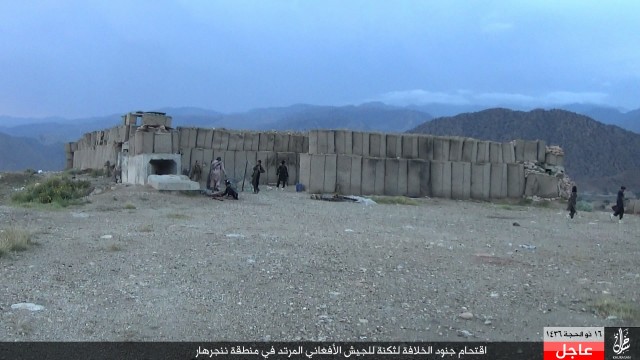 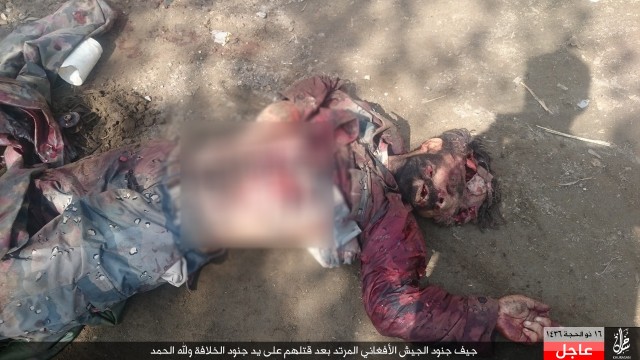 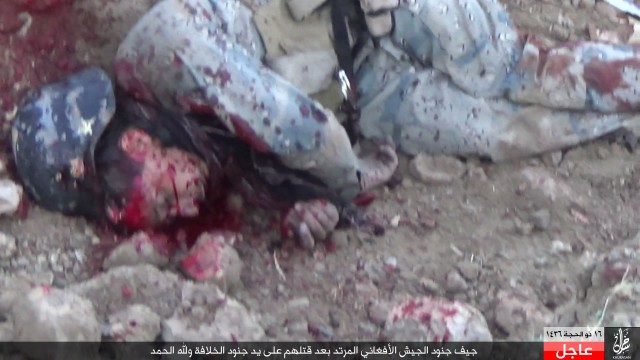 (Thanks to translator for assistance)

“Are IS gaining a foothold in Pakistan”