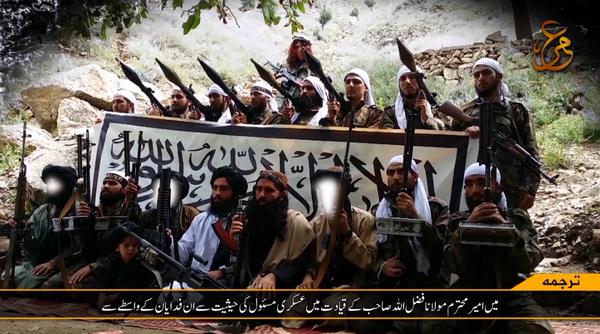 Despite ongoing military operation Zarb -e -Asb launched in 2014 to strike at the heart of insurgency in the Federally Administered Tribal Areas, Pakistan Tehreek -e-Taliban (TTP) still have the capabilities to launch a significant attack against the Pakistan Air Force at Bedaber near Peshawar. The attack could have been far worse had it not been for the swift response of security forces including the Quick Reaction Force (QRF) which arrived on the scene in ten minutes. According to DAWN, They were joined by the Special Service Group (SSG) special forces, Light Commandos, regular army personnel and Khyber Pakhtunkhwa (KP) police who helped ward off attackers believed to be under the control of operators working from within Afghanistan.

Major-General Asim Saleem Bajwa, an army spokesman, told Pakistan’s media, the terrorists arrived by vehicle on Inqalab road near to the entrance to the base and proceeded to launch an assault from 2 different directions. The base was built by the United States in the 1950s and was previously used as as a listening post to intercept radio information from the Soviet Union. Bajwa stated,

“after dismounting, the terrorists used rocket-propelled grenades (RPG) and automatic rifle fire to breach the gates and gain entry into the PAF base.

The terrorists then split into two groups, with eight militants heading towards the administrative area of the base while the other group headed towards the technical area,

Once the terrorists entered the facility, they were contained within 50 metres of either side of the gate, and were not able to advance towards their objectives.”

There are conflicting reports as to whether the attackers wore suicide vests (which was often the case during previous similar attacks). According to Shafqat Malik, head of the Bomb Disposal Squad, they appeared to be geared up for a long battle. Unable to move further into the base, TTP militants who were dressed in black constabulary uniform engaged in a firefight, and attacked a mosque hurling grenades and killing 16 men at morning prayer.

DAWN reported, “the army confirmed that 22 PAF personnel, three soldiers, including Captain Asfandyar Bukhari, and four civilians were killed, while 25 others got injuries in attack. 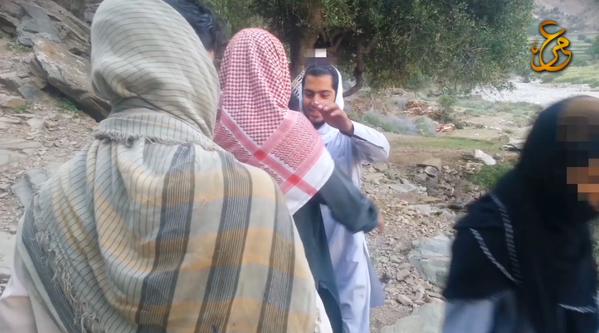 Fighters embracing before leaving for attack on Bedaber

TTP were able to send several messages to international media giving updates during the attack. Messages were sent by Muhammad Khurrasani Central Spokesperson Pakistan Tehreek-e-Taliban (TTP). Khurrasani was previously seen on video with his fighters before the launch of a major assault on Army School Peshawar in December 2014 which left 147 dead see following links,

The following is a translation giving some of the main details of the Bedaber assault,

In areas including tribal and all of Pakistan, the innocent and those who loved Allah were rained on with fire by these kafir frontline air force officers who were targeted one by one.

And last contact which was at 11 O clock in the morning one fidaeen told us that our only one partner has been martyred and the war is still going on. Approximately 200 officers have been killed so far.

And now we all are in contact with each other and therefore an organised war is in progress.

Note: Before this we circulated the news of martyrdom of a few of our colleagues because due to the intensity of the war they were out of contact with us and now the true situation has been clarified.”

“Tehreek-e-Taliban Pakistan’s fidayeen (suicide) unit, TSG commando fidayeen called from PAF base in Bada-e-Bair that according to our quick estimates more than 250 kafir’s frontline force’s members and officers have been killed. Our war is still going on and army is using helicopters and planes for shelling but our position is better and we shall take revenge of the blood of the innocent from these cruel people. We shall try to broadcast the telephonic conversation of the fidayeen Inshah Allah (Allah willing) tomorrow or day after.”

Soon after the incident, the COAS and Chief of Air Staff visited the wounded in hospital. Asim Bajwal SPR posted the following photos on Twitter, tweeting, 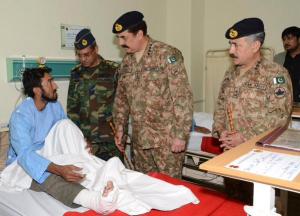 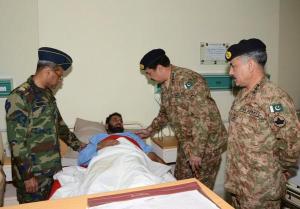 Carol Anne Grayson is an independent writer/researcher on global health/human rights, WOT and is Executive Producer of the Oscar nominated, Incident in New Baghdad.  She is a Registered Mental Nurse with a Masters in Gender Culture and Development. Carol was awarded the ESRC, Michael Young Prize for Research 2009, and the COTT ‘Action = Life’ Human Rights Award’ for “upholding truth and justice”. She is also a survivor of US “collateral damage”.