Invitation from mosque to visit on Monday June 1st, 6.30pm and bring a flower as a symbol of love and care.

The Islamic Community Centre of Phoenix Arizona which was the focus of an anti-Islam protest organized by ex-marine Jon Ritzheimer has a message for the world, “love is stronger than hate”. 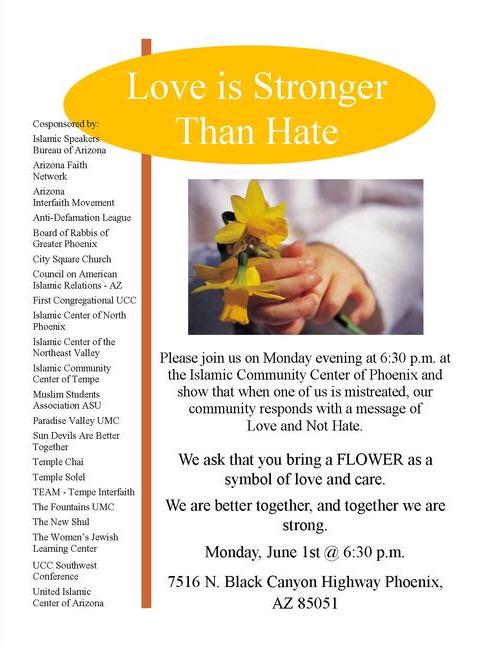 Ritzheimer targeted the centre after it emerged that Elton Simpson and Nadir Soofi the 2 gunmen who were shot dead after opening fire outside a conference on cartoons of the Prophet Muhammad in a suburb of Dallas were alleged to have once attended the mosque. Ritzheimer said during interviews that he believes “true Islam is terrorism” and had organized “F..ck Islam T-shirts for the protest as well as a “Draw Muhammad” session, see following link for earlier story,

“Arizona: Anti-Islam protesters rip up Qur’an in freedom of speech rally outside of mosque”

Those attending the mosque were advised not to attend the protest but when participants were seen outside, Usama Shami, the president of the ICCP extended a hand of friendship and invited individuals to join him and the 800 members for a prayer. The results were positive, some took up the offer. The Washington Post reported,

“Jason Leger, a Phoenix resident wearing one of the profanity-laced shirts, accepted an invitation to join the evening prayer inside the mosque, and said the experience changed him.

“It was something I’ve never seen before. I took my shoes off. I kneeled. I saw a bunch of peaceful people. We all got along,” Leger said. ‘They made me feel welcome, you know. I just think everybody’s points are getting misconstrued, saying things out of emotion, saying things they don’t believe.’

Paul Griffin, who had earlier said he didn’t care if his t-shirt was offensive, assured a small crowd of Muslims at the end of the rally that he wouldn’t wear it again.

“I promise, the next time you see me, I won’t be wearing this shirt,” he told one man while shaking his hand and smiling. ‘I won’t wear it again.’”

Now an invitation has been sent out to local communities encouraging people to visit the centre and bring a flower as a symbol of love and care. The centre says, “we are better together, and together we are strong.” 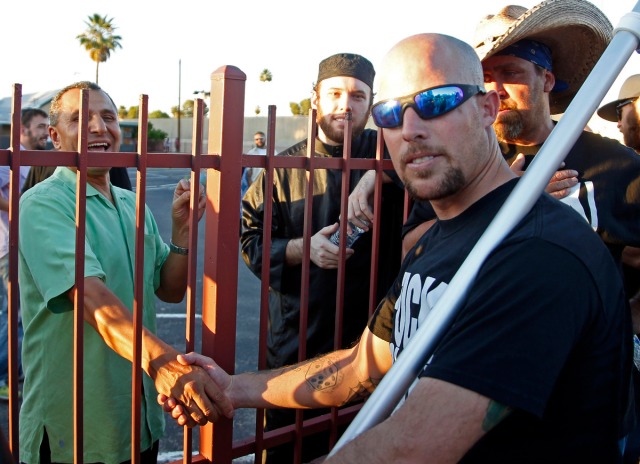 Jon Ritzheimer, right, talks to a member of the board, Muhammad Alrokh, left, outside the Islamic Community Center of Phoenix, Friday, May 29, 2015. About 500 protesters gathered outside the Phoenix mosque on Friday as police kept two groups sparring about Islam far apart from each other. (AP Photo/Rick Scuteri)