On 30th August 2013 (International Day of Disappeared Persons) campaigners in Pakistan once again took to the streets to call for more government action on their missing loved ones. Earlier this month I wrote in some detail about the work of human rights activist Amina Masood Janua who has for many years spearheaded a campaign to highlight the plight of Pakistan’s “enforced disappearances” providing support to the families of those missing (see link) https://activist1.wordpress.com/2013/08/01/amina-masood-janjua-championing-the-cause-of-pakistans-disappeared-as-she-marks-the-8th-annversary-of-the-search-for-her-missing-husband/

On 3rd July 2005 Amina’s husband Masood well known educator and businessman of Rawalpindi and Islamabad disappeared along with a friend Faisal Faraz, an engineer from Lahore. Both are thought to be secretly detained by the state. Amnesty International reports that hundreds, possibly thousands, of people became victims of enforced disappearance after Pakistan joined the US-led war on terror in 2001.

The Inter Services Intelligence (ISI) are alleged to be implicated in the cases of numerous missing persons. Many of those taken are thought to be innocent victims indefinately detained without going through fair judicial process. Amina can be heard talking about the impact of Masood’s disappearance on her family life on the following video http://www.youtube.com/watch?v=2Mv1_s6r6FA

More determined than ever in her fight for justice, Amina was joined by fellow campaigners on a peaceful walk starting from D-Chowk near Parliament House, Islamabad and sent out the following message to global supporters:-

It is lamentable that today’s world is compelled to observe International Day of Enforced Disappeared despite all the scientific and technological advancements. It signifies that our world is sinking down in the pitfalls of injustice and cruelties. In the pictures (published here) you can see victim families protesting once again in front of Parliament house Islamabad, pledging to never stop until their loved ones are released or given the right to due process.

Messages were sent to Amina from around the world, one from broadcast journalist Susan Maire read, “Amina Masood Janjua, you are one of the strongest women I know, a woman I wholeheartedly admire and support and one who fights every single day for the human rights of people who are illegally detained. God Bless You sister.” 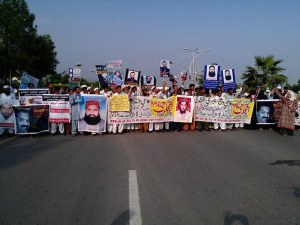 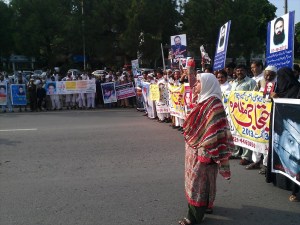 Human Rights Watch (HRW) called on Pakistan to ratify treaty known as the International Convention for the Protection of All Persons from Enforced Disappearance, to bring perpetrators to justice and avoid abuses. This was echoed by the International Commission of Jurists (ICJ).  Ali Dyan, Pakistan director for HRW said,

“ratifying the Convention against Disappearances is a key test for Prime Minister Nawaz Sharif’s new government. The government would send a clear political message that it’s serious about ending ‘disappearances’. And it would show its commitment to ensuring justice for serious human rights violations”

A recent report from International News (Aug 29th 2013)brought to the public’s attention cases of enforced disappearance’s allegedly by officers from Naval Intelligence that had formed a gang for the purpose of kidnapping traders and industrialists in Karachi for a huge ransom http://www.thenews.com.pk/Todays-News-13-25081-Agency-men-found-involved-in-kidnapping-of-traders

It is not easy to report on controversial issues in Pakistan either as there is a tendency for outspoken reporters that question state authorities to go missing also. Sam Zarifi, Asia-Pacific regional director of ICJ is concerned at the lack of accountability for such cases with those responsible for kidnappings unlikely to come before the courts. Zafari stated that “all disappeared persons must be released or, if charged with recognizable crimes, brought without further delay before a court to see if their continuing detention is legal. The government should also fully investigate and prosecute those who are responsible for ordering, participating, or carrying out enforced disappearances.” 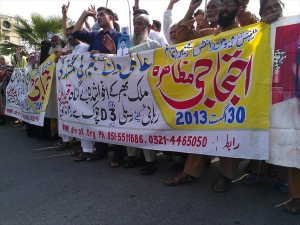 One mother refuses to give up on justice. Hameeda Bibi is going through the courts determined to seek redress for the killing of her son Farmanullah, whose body was found bearing signs of torture, kidnapped and returned in a sack. She is now taking on the security services in a Peshawar Court demanding compensation, Hameeda is a widow and her son was the sole breadwinner for the family http://www.theguardian.com/world/2013/aug/14/pakistan-disappeared-compensation-military-spies

Arif Jan, a lawyer for families of the “disappeared” is calling for the release of detainees allegedly held by ISI, highlighting that there are 450 habeas corpus petitions in Peshawar High Court alone. As he points out, this action is one step in the right direction and with the forceful determination of Amina and Hameeda, the day may not be too far away when those who committed such wrongful acts are finally held to account.