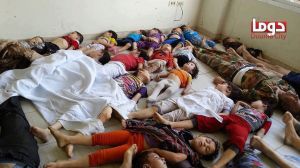 Awoke this morning to messages and videos from Syrian opposition supporters depicting disturbing scenes of an alleged chemical attack on East Ghouta, Damascus with claims it was launched by Bashar al-Assad regime. Initially there was little on mainstream media and a friend who might have been able to check out further on the ground was not immediately contactable. Message with first video read:-

East Ghouta, Damascas province, 21-08-2013: regime’s chemical weapons attacks on Ein Tarma and Zamalka in the East Ghouta region of Damascus province tonight. According to an eyewitness in East Ghouta, regime forces are now launching missiles at the areas of the attacks in order to prevent rescuers and medical personnel from reaching them.

THESE ARE THE FIRST VIDEOS I RECEIVED (VIEW WITH CAUTION GRAPHIC CONTENT) :- 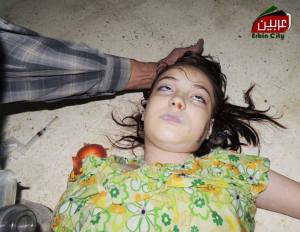 As always it is important to check as much as possible regarding authenticity as fake videos/photos are always a concern when reporting. However a series of videos show some very young children, unresponsive with distressed breathing, others are twitching with what appears to be foam at the mouth.  Given that some are clearly toddlers it would be difficult to direct those so young (if propaganda material as some allege) and even if so this would still need to be investigated as such propaganda would be serious abuse of small children.

There is one video of what appears to be an explosion from a missile in the night/early morning as sky is dark. Others show outside scenes of areas and people being hosed down with extremely distressed children and adults trying to cover their faces from exposure to contaminants. Inside a hospital are many bodies with those affected appearing to show signs of poisoning, respiratory problems, running eyes, nerve damage from toxic agents. Doctors are working on patients with hand pumps, some attempt to resuscitate tiny chests with their fingers. 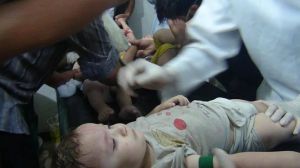 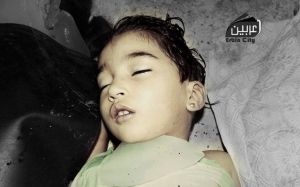 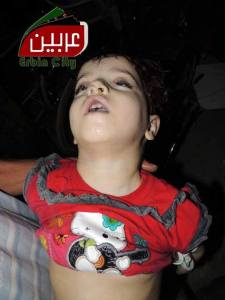 On one video the words “sarin, sarin” can clearly be heard raising concerns that this is a nerve agent which may have been used in East and West Ghouta. One sarin incident that readers may remember was the devastating attack on the Tokyo Subway on March 29th 1995 http://www.history.com/this-day-in-history/tokyo-subways-are-attacked-with-sarin-gas

BBC are documenting unconfirmed reports of a chemical attack from videos received and a denial from the Assad regime, “State-run news agency Sana said the claims were “baseless” and an attempt to distract UN weapons inspectors”. BBC also report UK Foreign Secretary William Hague calling for the Syrian government “to allow immediate access to the area” for the investigators and said that Britain would raise the issue at the UN. The Arab League are also calling for inspectors to go to site.

Patrick Henningson reporter and international affairs analyst made claims on Russia TV stating that that “only the rebels benefit from chemical attack” as this incident has occurred at a time when a United Nations team are visiting Syria to investigate alleged use of chemical weapons http://www.youtube.com/watch?v=ejyqn__c6RY

At // 2.45 // on the morning of Wednesday 21st August 2013, Assad’s forces shelled with // 29 // rockets loaded with toxic chemical heads between Ain Tarma and Zamalka and Jobar, where fell, respectively. Most of the injuries and the martyrs received to the medical points were children and women and the number of martys killed were on their beds as they slept, and the shelling was in places where civilian and most of the injuries, civilian. Doctors of field hospitals said ” according to medical cases who the used gas is the Sarin gas. Civilians directed to basements and shelters trying escape from the shelling and this led to increasing numbers of martyrs . Human Rights Watch Office In East Ghouta had counted / / 1228 / / martyrs and and thousands injured The number can be increased as they divided on The following medical points ::

We in the office appeal to all humanitarian organizations and invite them to assume their responsibilities in front of what is happening to the Syrian people, words of condemnation and denunciation cannot serve any more and the killing machine that kill our families is ongoing. We also appeal to all humanitarian organizations and relief to help us antibiotics chemical medicine (atropine, etc.) has become non-existent and we needed as that hospitals need medicines to treat the injured. 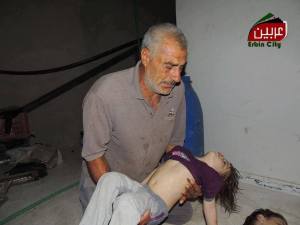 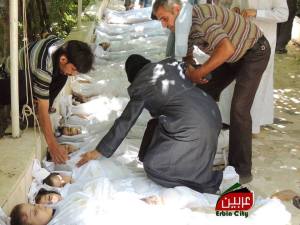 The following paper explains what to look for, signs and symptoms of a chemical attack and is a European Guidance Document On The Use of Medical Products For The Treatment Of Patients Exposed To Terrorist Attacks With Chemical Agents…

Those investigating in Syria will be likely to look for evidence from animals and plants as well as people that could give clues to any incidents of chemical attacks in the region.