IS THE SPOKESPERSON FOR HIZB- UT -TAHRIR BEING ILLEGALLY DETAINED? 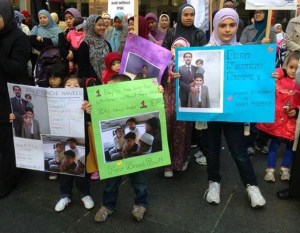 As Muslims throughout the world end their month of fasting and greet each other with the words “Eid Mubarak” spare a thought for those who are missing, “enforced disappearances” and away from their families who cannot share the joy of this time. One such family is that of Naveed Butt, the official spokesperson for Hizb-ut-Tahrir (HuT) who was seized off the street in Pakistan in front of his three children outside their home in May 2012. He remains missing. Further details can be read here on my earlier blog Where is Naveed Butt written at the time of his disappearance https://activist1.wordpress.com/2012/05/21/where-is-naveed-butt/

The Facebook page of HuT states, “Hizb-ut-Tahrir is a political party whose ideology is Islam. Its objective is to resume the Islamic way of life by establishing an Islamic State that executes the systems of Islam and carries its call to the world”. The purpose of this post is not to argue for or against establishing a Caliphate but to look at the human rights of an individual and the role of the state.

Enforced disappearances associated with the state became more widespread after 9/11 with the CIA putting pressure on Pakistan to clampdown on citizens that may be attached to terrorist organizations. Some of those who went missing were allegedly handed over to the CIA for money, and ended up in Bagram, Afghanistan and later Guantanamo. (It is important to note that many in Guantanamo were never charged due to lack of evidence and were released after years of incarceration, others have been cleared but still await their freedom).

In 2008 human rights group, Amnesty International published their report “Denying the Undeniable, Enforced Disappearances in Pakistan”.  As Amnesty explained, back in 2006 the Supreme Court took up regular hearings of petitions filed on behalf of Pakistan’s ‘disappeared’ but that changed in November 2007 when then President Pervez Musharraf imposed a state of emergency and deposed the majority of judges. This soon turned into an atmosphere of the state being above the law with a lack of accountability for those taken into custody. Families of the missing such as Amina Masood Janjua (whose husband Masood disappeared in July 2005) have fought long and hard to keep such cases in the public eye,  working on legal issues and providing practical support to those left behind http://www.amnesty.org/en/appeals-for-action/end-enforced-disappearances-pakistan

Amnesty has repeatedly confronted the Pakistani authorities highlighting evidence within its reports of how government officials have “obstructed attempts to trace those who have disappeared, using official court records and affidavits of victims and witnesses of enforced disappearances.” Amina has courageously taken on the authorities and had some success in having persons released from detention but Masood is not among those freed and is thought to be illegally held by the Inter -Services Intelligence (ISI) without charge or trial. She continues to remain optimistic that they will one day be reunited but it is now over eight years since she carried out a normal family life. More about Amina’s work can be read here…  https://activist1.wordpress.com/2013/08/01/amina-masood-janjua-championing-the-cause-of-pakistans-disappeared-as-she-marks-the-8th-annversary-of-the-search-for-her-missing-husband/

According to a recent video released by the wife of Naveed Butt, her husband’s whereabouts remain unknown but he is believed to have been detained also by the state. A statement from the family on the website Free Naveed Butt highlights that “on Monday 16th July 2012, the Pakistan government’s secret agencies did not comply again with court orders to produce Naveed Butt, the official spokesman of Hizb ut-Tahrir, more than two months after his abduction.” A recent Ramadan message from Mrs Butt discussing Naveed’s disappearance can be viewed here..  http://www.youtube.com/watch?v=D2J7eiQMlQk#at=11

Independent human rights activists point out that if a person is suspected of committing a crime, involved in illegal activity, then evidence must be produced. The family of the missing person should be informed swiftly as to where their loved one is being detained with visiting rights granted and the person held allowed access to legal representation. This does not appear to be happening for many of those deemed enforced disappearances and their relatives in what is clearly a violation of basic human rights.

In the same month that Naveed Butt disappeared, the Hong Kong-based Asian Legal Resource Centre (ALRC) and Action by Christians Against Torture France (ACAT-France) released their report detailing Pakistan as somewhat of a black hole in terms of its human rights record. There has been  little light ahead for campaigners of the disappeared and one can only imagine what may have been swallowed up in the darkness. This report however was submitted to the United Nations Human Rights Council, under its Universal Periodic Review (UPR) process and the following observation made by Mr Baseer Naweed, Senior Researcher at ALRC :-

Although Pakistan is widely recognised as being a global hotspot in terms of insecurity and turmoil, due to its political alliances, it typically avoids the level of scrutiny by the international human rights system that the scale of rights violations in Pakistan warrants. Hundreds of forced disappearances have been reported from conflict-affected Balochistan province alone, for example. Elsewhere in the world, this would generally lead to far greater outcry.

In June 2013, Chief Justice Dost Muhammad Khan of the Peshawar high court was made aware of 280 cases of missing persons and stated; “it has come into my notice that there are secret detention centres in the no-go areas of the provincial metropolis but none of the law-enforcing agencies is taking action in this regard.” Current scrutiny by the courts has led to renewed questioning concerning the legality of secret detention centres and highlighted that more attention must be paid to First Information Reports (FIRs) into missing persons and trying to establish their whereabouts.

Munir A Malik, the Attorney General of Pakistan (AGP) has spoken of his concern that it could take decades to solve cases of missing persons. Justice Jawwad S Khawaja has divided missing persons into four distinct categories:-

1)      Those about whose forced disappearance there is direct evidence.

2)      Those about whose disappearance there is circumstantial evidence.

3)      Those about whose disappearance there is no clue or evidence.

4)      Those who are missing for other reasons and do not fall in the category of forced disappearances.

Some of Pakistan’s press appear selective on which missing persons’ cases are reported. This could be for a number of reasons, undue influence from the state, fear of ending up as one of the disappeared (given  the number of Pakistani journalists kidnapped and killed) or perhaps not being aware of some cases with families themselves afraid to file reports against state agencies. There may also be a personal bias, not agreeing with the politics of a missing person, though media is supposed to remain independent and objective in their reporting. The Express Tribune does address some of the problems in dealing with missing persons cases in its article, “Sense of Impunity” Surrounds Enforced Disappearances in Pakistan: UN  http://tribune.com.pk/story/516634/sense-of-impunity-surrounds-enforced-disappearances-in-pakistan-un/

Leaders of political parties that once appeared keen to be photographed with families of the missing in the run up to the recent elections have yet to come up with meaningful policies and revised actions to assist families recover their loved ones. It is important that the courts are not alone in calling for accountability and condemning the illegal detention centres in Ghallanai, the headquarters of Mohmand Agency, Orakzai, Bajaur and Kurram agencies but that politicians do so too.

Hizb-ut-Tahrir has held protests outside embassies in several countries over the alleged kidnapping of Mr Butt and claim that their website highlighting the disappearance of their spokesperson has been subject to a ban at times. Whatever the politics surrounding HuT and its policies, the fact remains that procedures should be in place to protect citizens whether or not there is reason to take a person into custody. The wife of Naveed Butt has every right to know what has happened to her husband and the rights of those detained must be protected legally. There are also children to consider that have been traumatised by the disappearance of their father and need to be reassured that he is safe and well. 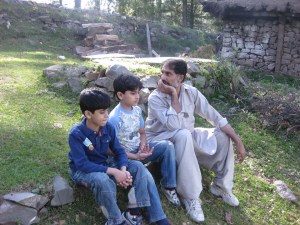 It is often said that the measure of a society can be judged by how it treats its disadvantaged citizens and its prisoners. In terms of those detained, alongside the efforts of judges and campaigners, there needs to be much greater efforts towards transparency and upholding human rights from the current government to ensure all in Pakistan work within the law and not above it.

It has been announced that Prime Minister Nawaz Sharif will review the recommendations of the Ministry of Law and Justice regarding missing persons and is to set up a Special Task Force. Let’s hope that this initiative is not just a talking shop but will put pressure on people to open their eyes and face up to what could be very uncomfortable findings. It is vital that justice is achieved for all those affected by enforced disappearances including the family of Naveed Butt.