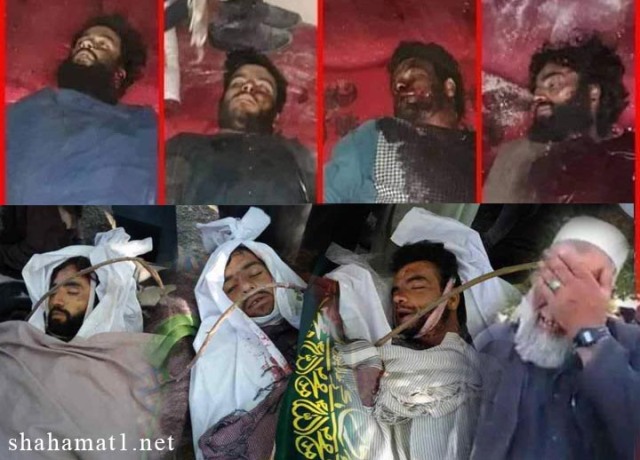 Lately both the invaders and puppet forces have taken to increasing airstrikes and raids on sacred and public places. Savage methods are being introduced to murder women and children; destroy their homes and thus deprive them of shelter; loot their valuables; and even target cattle and livestock. Ashraf Ghani recently addressed his forces as soldiers of democracy and accurately so, for the soldiers of democracy are infamous around the world for their careless violence on the oppressed. Unable to defeat their opponent, they then extend their barbarity to women, children, the elderly and even animals, as is the case in Afghanistan. Schools, clinics and marketplaces too are burned down by these soldiers, all in the pursuit of bringing democracy to Afghanistan.

Recently the soldiers of democracy carried out a raid on Chopan, as well as surrounding areas, in Maidan Wardak’s Jaghatu district. According to initial reports, sixteen civilians were martyred in this brutal operation. This comes at a time when the enemy had already conducted fresh operations in provinces such as Maidan Wardak, Helmand, Farah, Faryab and Paktia in which dozens of civilians were martyred and wounded and many shops were looted and then burned down. The cowardly enemy seems to assume that such acts of barbarity will conceal its failures in the war or that perhaps its soldiers who suffer from low morale will be motivated thereby. This is wishful thinking; success cannot be secured through inflicting oppression on the weak. If this was possible, the invading and quisling forces whom refused to shy away from even the most extreme forms of violence throughout the war would not take to retreating today.

History is but repeating itself. Almost two decades ago when CIA official Cofer Black was reminded by Russian diplomats in Moscow of the Soviet defeat he responded with, “We’re going to kill them…We’re going to rock their world.” Quite the reverse took place and today both the American invaders and Kabul quislings can be seen walking the path of the communists in Afghanistan. When the Soviet Union and Afghan communists became certain of their defeat, they increased in oppression thinking it a way to secure some success. Failure of course resulted and their dominance over our country was uprooted by the storm of blood and tears of the Afghan people.The Afghan people are therefore aware that this present wave of oppression will only serve to destroy both the invaders and their puppets.

The Islamic Emirate is determined to protect the wealth and lives of their people and, as opposed to the enemy, exercises strict caution against civilian killing in its operations. Many a time, operations were discarded for no other reason than there being present the possibility of civilian casualties. In the case of civilians facing damage as a result of Mujahideen operations, relevant persons have been punished. Contrast this with the enemy who has adopted an inhumane policy of targeting civilians and their facilities because of which the Afghan people continue to heavily suffer. The Islamic Emirate acts as a protecting force for the Afghan people and therefore has and will continue to seek revenge on behalf of its people for the injustice inflicted on them. The Mujahideen will not allow the enemies of Islam and Afghanistan to live peacefully as occupiers and the Afghan people will most certainly be avenged and freed from both foreign and domestic oppression, Allah Willing.