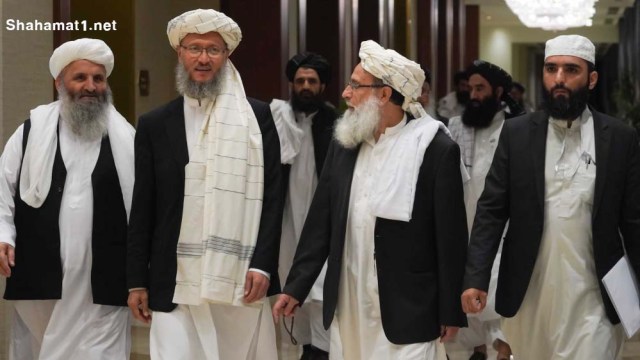 Negotiations with America were paused for two days due to the intra-Afghan dialogue and resumed on Tuesday. It is hoped that these negotiations will prove helpful in bringing an end to foreign aggression, liberating our beloved homeland and implementing therein an Islamic system, as are the wishes of the Afghan Mujahid nation.

The Islamic Emirate considers it important that there exist an agreement and mutual understanding between Afghans for achieving a joint objective. For this reason, it sat around one table with elements whose oppression had reached to the extent of Islamic and national treachery. The Islamic Emirate proceeded with prudence and foresightedness so that through mutual understanding all can play a role in eliminating the ongoing crisis in Afghanistan and saving the jihadi sacrifices from going in vain.

It is a good sign that the whole nation supports the Islamic Emirate’s stance, elimination of American aggression and the implementation of an Islamic system. At the closing of the intra-Afghan conference in Qatar, a statement was released in which all have agreed upon certain demands that were an important desire of both the Islamic Emirate and the Afghan people.

The Afghan conflict begun when some people gave support to American aggression and opposed the Islamic system. They ensured American occupation be prolonged in order to safeguard their own personal interests while they remained fully aware that this was equivalent to the destruction of Afghanistan. However, since they now express hatred for American aggression and are content with the establishment of an Islamic system, it is evident that positive steps are being taken toward peace and this is the direction in which we are heading.

The participants of this conference ought to begin trying to implement the agreement of the conference, according to which prisoners must be freed, poisonous propaganda in the media be stopped, buildings of public use and the civilian population mustn’t be targeted, and so forth. If this agreement is implemented with responsibility and seriousness, then all hurdles in the path of freedom will certainly be removed, Allah Willing.