Islamic Emirate: Let America Obtain Lesson from the Past 17 Years!!! 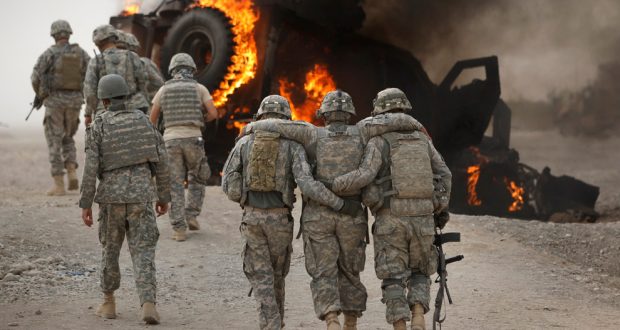 Seventeen years ago on the 7th of October, 2001, America mounted an attack on Afghanistan without justification and under a flimsy excuse. It took the national sovereignty, security and freedom of Afghans as hostage, began a new game of striking religious values and of genocide, violence and oppression upon the oppressed Afghan public. It declared every Afghan who rejected American servitude a terrorist and attacked him.

During the past seventeen years, no such day or night passed in which the enemies of Islam and humanity (the occupying and their mercenary forces) had avoided one moment of massacring, raiding and dropping bombs the oppressed Afghan civilians.

The American oppressors tested new technology on oppressed Afghans, from the mother of all bombs to thermobaric weapons, every bomb was rained down. And from the drone to B-52, every type of aircraft was freely used and carried out savage attacks on defenceless civilians.

According to statistics, as a result of air and drone strikes, raids and other oppression of the occupying American and mercenary forces during the past seventeen years, four hundred thousand oppressed Afghan citizens were martyred, ten hundred thousand wounded and two million people were held captive in various jails and became a target of violence. This brutal series of oppression and beastliness is still ongoing.

During the past seventeen years, from the former American president Bush’s presidency to both terms of Barack Obama and to the present term of Trump, the aggressors experimented every type of policy of violence unsuccessfully but by the Grace and Favour of Allah and as a result of the honourable Afghan public’s bravery and courage, the arrogant America was faced with defeat and her pride was ruined, and the sacred jihad was kept ongoing in confrontation with her. The spirits of the Mujahideen are extremely high while the morale of the enemy is weakening day by day.

In contrast, Allah the Most High bestowed such firmness to the sword and courage of the Mujahideen that even Bush separated from the seat of authority and left the White House with this grief and saying these words that we attacked Afghanistan and ended the Taliban’s system but American soldiers did not breath a breath of rest over there and everyday several American soldiers get killed and become wounded in Afghanistan.

Barack Obama admitted in his final speech to American commanders in the Pentagon that despite America’s full strength and force, it remained unsuccessful in defeating or weakening the Taliban.

Although Trump announced and begun a deadly scheme and beastly policy for the mass killing of the Afghan public, by the Grace of Allah even his pride was ruined through the sword of the Mujahideen and very quickly, through political action, announced an agreement to hide their failure and historical defeat.

The Islamic Emirate terms the 7th of October a day full of difficulties, problems and destruction as a result of the American attack and aggression on Afghanistan and this day is shameful for the aggressors and puppet rulers. That day is near where like the defeat of the English colonizer and Soviet Union, the Afghan public will hear good news of the country’s freedom from the American tyrant and shall celebrate independence.

And that is not difficult for Allah.