Clinton Pryor (27) wasn’t happy when he learnt about the forced closure of Aboriginal communities so he decided to take action and do something about it. This inspirational young man decided to go “walkabout” and so began an extraordinary journey across Australia from Perth to Canberra, 5581 kilometres, around 7 million steps according to the Canberra Times and wearing out 8 pairs of shoes.

Clinton describes himself as a Wajuk, Balardung, Kija and a Yulparitja man from the west. Walkabout is a right of passage where an indigenous male embarks on a journey often during adolescence spending time in the wilderness and seeking a spiritual connection as he enters manhood. It is a return to traditional Aboriginal life. Clinton describes his sense of spirituality on the Clinton’s Walk for Justice website stating,

“I see the land and animal I see this world in a different way. It like Star Wars like the force. But I get mine strength from the land. It very hard to explain sometime. The land gives me strength and I give her the love and care for what she need from me by looking after her and trying to protect her from this mining company. My people we believe that when we die we come back and be a part of the tree, animal, rock, river, the air and the land itself. That why I very connected to the land because I know that those who pass on before me always with me and around me. The great energy of life.”

What is also remarkable about Clinton is that at one time he was on the streets and overcame both homelessness and illiteracy, teaching himself to read. Back in June, Clinton wrote an article for the Guardian newspaper, he said,

“I started this journey walking from Perth to find the truth and find a new way for Aboriginal and non-Aboriginal people in Australia. For the past 50 years our people have been fighting for rights, but it’s like it has just gone down the drain too many times. So, I decided to go for a big massive walk across the country to find the truth of what’s going on. What I’ve seen and experienced this way is that our people are living in developing world conditions.

Full article can be read here,

During his journey Clinton met both regional Aboriginal communities and non Aboriginal folk. He got together with elders, hearing their stories and talked with school children and community groups. Clinton also attended the funeral of Elijah Doughty, a Kalgoorlie teenager who was killed by a man later convicted of dangerous driving but controversially found not guilty of manslaughter. The case sparked outrage and demonstrations with protesters highlighting that non-Indigenous people charged in such cases are often acquitted escaping justice and accountability.

At times the route was extremely gruelling. As part of his walkabout the West Australian reported that Clinton trekked through the Gibson Desert for two weeks during summer where he had to walk at night to prevent exhaustion. Fortunately he had the backing of a committed support team on Twitter and Facebook and enthusiastic welcoming committees ready to cheer him along. Clinton’s Walk was “entirely crowd funded by the community”. 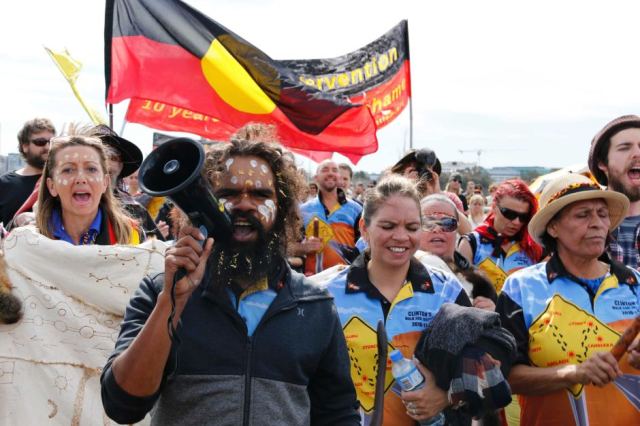 On Sunday, Clinton who earned the title Spirit Walker, completed his mammoth feat ending up at Parliament House, Canberra where an Aboriginal Tent Embassy was set up. . A petition had been circulated earlier calling on the Governor General Peter Cosgrove to meet Clinton with indigenous elders at the tent embassy rather than just a one to one meeting at Government House. 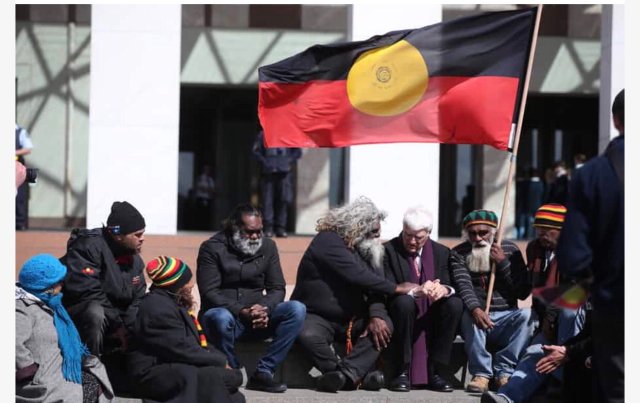 Elders with Bob Kattor, an Australian federal politician, a member of the Australian House of Representatives  (Image posted by Jane Salmon)

Nakari Thorpe tweeted that Opposition Leader Bill Shorten along with Labor MPs and senators met with Clinton’s Walk and elders at the front of Parliament House. Shorten listened to Clinton and others present tweeting, “he walked 6000km to deliver a message on Indigenous justice. Honoured to meet Clinton a Clinton’s Walk today. We’ll keep the conversation going.” He also added, “I made clear I didn’t agree with everything they said, but I do believe it’s important that people who walk 6,000 kilometres, and our First Australians generally, are treated with greater respect and equality than they currently receive.”

Clinton and elders have a list demands which can be viewed below. Talking to the Sydney Morning Herald, Clinton said,

“There are issues happening for our communities in towns and cities across the country, and you have to sit down and understand what is going on there,”

Politicians must now take note of Clinton’s concerns and move towards action on matters brought to their attention by a true champion for indigenous communities. As one journey ends for Spirit Walker, another begins. 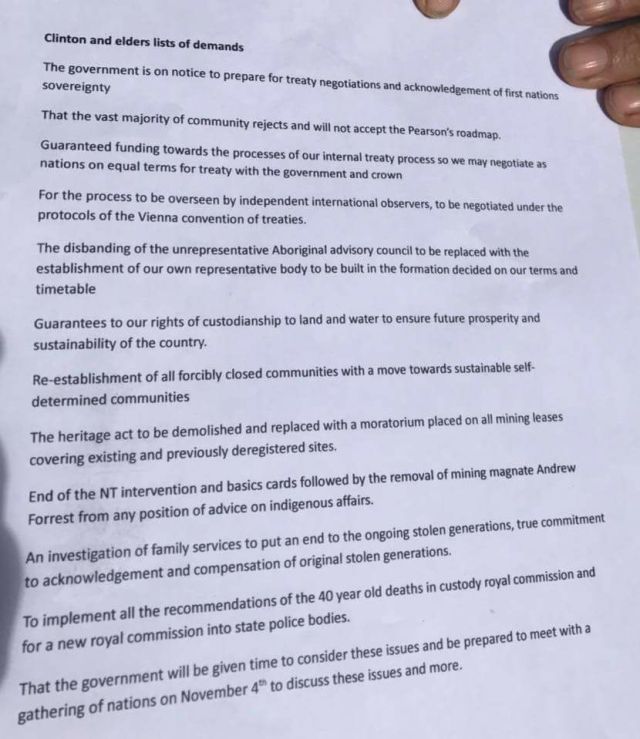