Pakistan Tehreek-e-Taliban Jamaat-ul-Ahrar (TTP JA) have claimed responsibility for a deadly bombing in Parachinar, Kurram district of Pakistan close to the border with Afghanistan on March 31 which left 24 dead and 90 injured.

The attack took place at an Imambargah, a congregation hall for Shia commemoration ceremonies. BBC stated, “reports say a car packed with explosives was left near the women’s entrance of the mosque as people gathered for Friday prayers.”

The victims included “four-year-old Zehra and her brother Ali, barely 13 months old” according to the Express Tribune. Their mother died in the blast and another relative is critically injured, see following story, 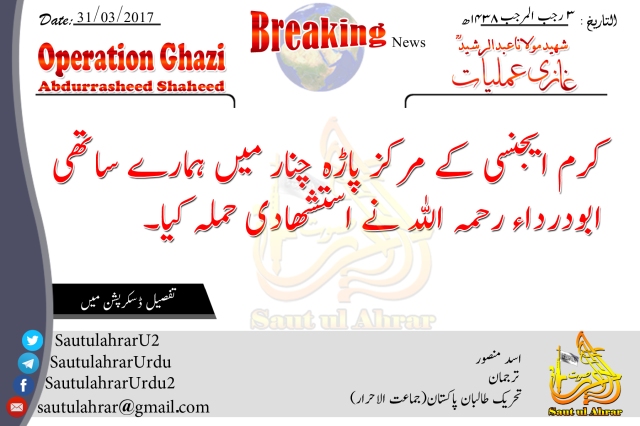 The statement came showing a letter head with the name Operation Ghazi, Abdul Rasheed Shaheed who was killed in the Red Mosque raid in Islamabad during the time of President Pervez Musharraf who was also a 4 star army general. The following is a translation into English, (thanks RA),

“In Parachinar the central Khurram Agency, an old and famous mujahid, Seth Nazir alias Abu Dar Daa’ (bless him), who hailed from Mohmand Agency. In operation Ghazi Abdur Rasheed Shaheed (bless him) carried out a landmark car bomb attack on the worst kafir of the universe, Shia people as a result of which dozens of enemies of anti Islam and anti Sahiba karam were made fuel for the horrific fire of hell.

Since Shia have always been the scum of the kafir and along with the Ummahat e Momeneen (ladies of the virtuous) all Sahaba karam (companions of prophet), they have disrespected them and as per operation Ghazi’s militancy policy are within our area of target. That is why their Centre meaning the Imambargah was made a target and our this explosive laden car was exploded right on the gate of the Imambargah.

These enemies of Islam who are giving madrassa education in Rawalpindi in our dear country and who are involved in the martyrdom of Ulemas and various terrorist activities about which respected Amir Umar Khalid Khurasani Hafiz ullah has announced revenge. Therefore as per operation Ghazi Shaheed, more horrific attacks will be leashed on Shia people. Inshah Allah.”

Protesters in Parachinar took to the streets carrying the bodies of the deceased at Shaheed Park and demanded immediate action against those involved in the incident according to GEO TV. Several persons were reported injured as security forces opened fire to disperse the crowds. The situation was calmed following negotiations with authorities including the army and police.

A vegetable market in Parachinar was also targeted by insurgents back in January leaving 25 people dead and 87 others injured when a bomb went off during peak business hours on a busy Saturday morning. Dawn media reported two separate claims of responsibility,

“The outlawed Lashkar-i-Jhangvi al-Alami, in a text message to journalists, claimed that it along with a splinter group of the banned Tehreek-i-Taliban Pakistan (TTP) led by Sheheryar Mehsud had carried out the attack.

In a separate statement, the spokesman for the banned TTP, Mohammad Khurasani, said: ‘A well-trained fighter, Saifullah alias Bilal, carried out a suicide attack in Parachinar.'”