Islamic Emirate: Prisoners should not be made the Prey of Politics 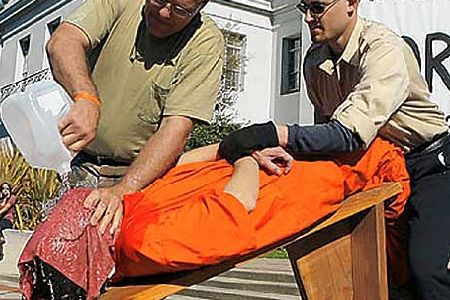 The Kabul regime’s mistreatment of prisoners in its prisons has reached dangerous proportions. Individuals suspected of cooperating with the Mujahideen are arbitrarily interned and then held years without trial – sometimes disappearing from prisoners all together to face an unknown fate.

Prisoners of the regime face malnutrition, lack of health facilities, psychological torture and ongoing physical mistreatment. They are deprived of the most basic of their human rights, and routinely face physical abuse.

The vast majority of the regime prisoners belong to the political prisoner categories. They have either been suspected of being members of the Mujahideen or otherwise their family members are accused of being insurgents and thus they are imprisoned to cause pain to their family. Government and non-government reports suggest the many of these prisoners, particularly in Bagram Prison, face sever mistreatment probably amounting to torture.

With the fragmentation of central authority many local commanders and warlords have propped up private ‘black site’ prisons where suspects are taken away and in most cases never heard from again. Even prisons under the regime’s direct control have been handed to cruel commanders and officials who take away prisoners in the middle of the night without following the legal protocol and then summarily execute them. For example in Kandahar’s main prisoner Commander Raziq’s men routinely take away dozens of prisoners each night. Their murdered bodies are then later discovered in deserts showing visible signs of torture and physical mistreatment.

The regime perhaps thinks that by such actions they will deter their citizens from continuing their ongoing armed jihadi campaign against injustices and foreign occupation. They should have learned by now that if barbarity was the way to oppress an independence-seeking nation then the Soviets would not have been forced to withdraw from Afghanistan.

The open and persistent mistreatment of prisoners in regime prisons is deserving of open and widespread condemnation and the failure of international human rights organizations to take any action is a black mark in the records of such organizations. Despite having full access to such prisons and notwithstanding the testimony of hundreds of eye witnesses these organizations have turned a blind eye to the systematic torture of prisoners and have failed to live up to their lofty ideals.

These said organizations should follow their own ideals and break their deafening silence on the torture of prisoners. These prisoners and by extension the organizations that purport to defend the rights of prisoners should not be made prey to politics and in consideration of their duties should openly condemn the ongoing mistreatment of political prisoners in Afghanistan.