Afghanistan: US/NATO bomb families in Kunduz a year after incinerating hospital patients in their beds 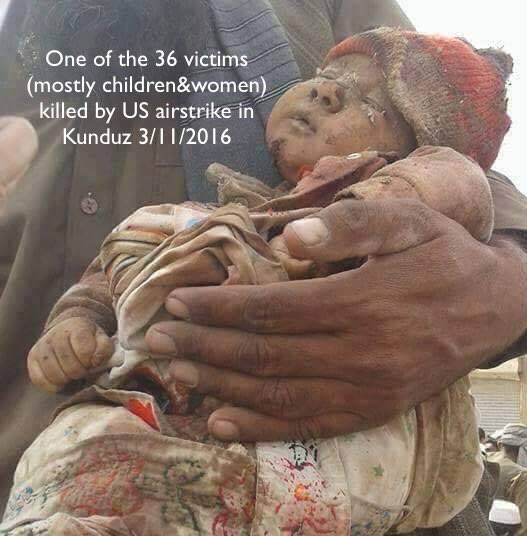 At least 36 civilians including 13 children and 4 women were killed in a US Nato-led Resolute Support mission airstrike on the village of Buzi Kandahari in Afghanistan on Thursday according to freelance journalist Mirwais Afghan who covers the region. Provincial spokesman Mahmood Danish confirmed at least 30 dead and 26 wounded to AFP. This comes just over a year after the US bombed a Doctors Without Borders (MSF) hospital in the city of Kunduz, just 3 miles away, killing 42 people and incinerating patients in their beds. This caused an international outcry which grew with the failure to hold those responsible to account despite an investigation.

The latest incident happened at around 4am when US airstrikes were called in to support American and Afghan military under attack from the Taliban who have twice taken over the city. Kunduz police chief Gen. Qasim Jangalbagh told Associated Press, “the target of the raid were two senior Taliban commanders, who were killed in the fighting along with 63 other insurgents.”

Emran Feroz who also writes on Afghanistan drew attention to biased media reporting. He claimed that although civilians have been bombed to death,”media outlets still prefer to focus on 2 dead US soldiers” who were also killed on Thursday along with 3 Afghan militia. He went on to say,

“We are now talking about 30-36 civilian air strike victims in Kunduz. And some still wonder why Taliban have easy job among locals there. Some people on the ground in Baghlan/Kunduz told me that death toll after recent air strikes might be much higher, even more than 100. Reason: US nearly destroyed a whole village. Many victims might still be under wreckage. For the record: Kunduz faced NATO bombing massacres regularly. Also after this one, we already know that the murderers won’t face charges.”

Brig Gen Cleveland, US military spokesman responded to the bombing in the Guardian saying,

“As part of an Afghan operation, friendly forces received direct fire and airstrikes were conducted to defend themselves. We take all allegations of civilian casualties very seriously.”

“As this was an Afghan operation, we’ll work with our partners to investigate but refer you to them for additional details in the near term. We’ll provide updates as we have them.”

Amnesty International highlighted the lack of accountability for the Kunduz strikes saying, “previous violations of international humanitarian law by US/NATO troops still remain uninvestigated and unpunished.” Tabish Forugh a Fulbright Scholar and Former AFG Election Commission Official tweeted, “according to laws of war, non-combatants shall be protected under any circumstances. What happened in Kunduz in shocking and inhuman.”

Angry locals took to the streets to protest outside the governor’s office taking with them dead bodies of their loved ones laid out in trucks. One infant was reported to be only 3 months old. A heartbroken labourer Taza Gul (55) told the BBC, “I have lost seven members of my family. I want to know, why these innocent children were killed? Were they Taliban? No, they were innocent children.” 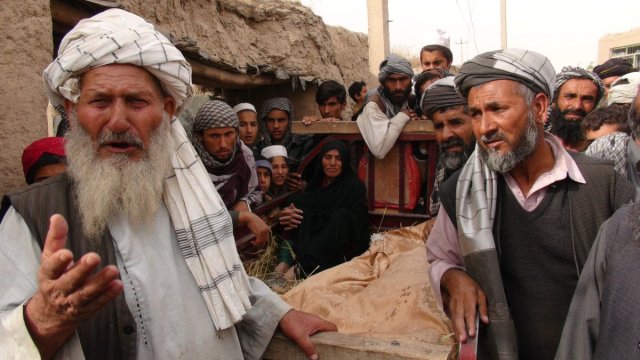 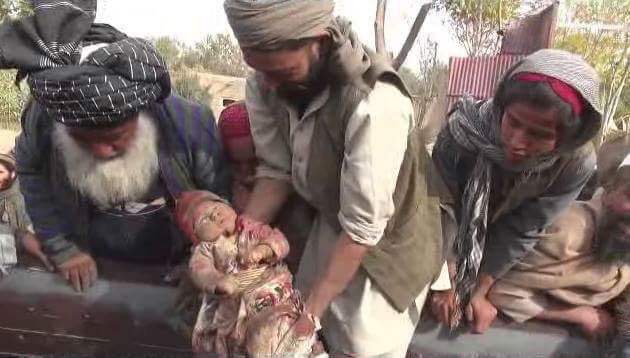 Youngest victim was only 3 months old (Image via Fakhruddin Kharizada) 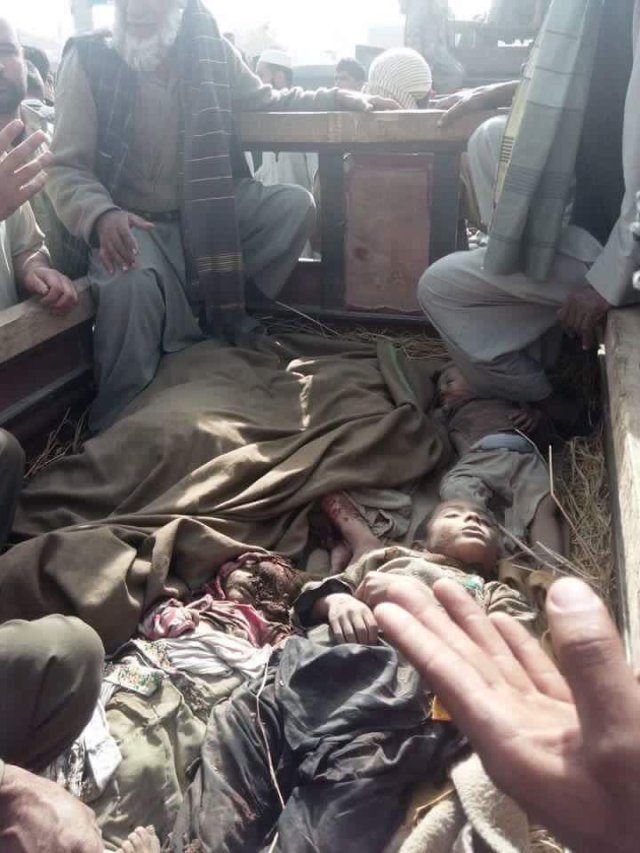 Afghan Resolute Support put out the following release regarding the death of 2 US service members that died on the same day.

Ahmet Yar pointed out that the attack the homes of families in Buzi Kandahari was not an isolated incident he said, “before Kunduz massacre, American airforce killed tens of people in Sherzad district of Nangahar 6 days ago & about 70 in Uruzgan 4 days ago. Yesterday’s Kunduz airstrike was the third war crime committed by America in Afghanistan this month alone. Total 150+ civilians killed.”

In a statement released in October 2015 following the strike on the hospital in Kunduz, Medecins Sans Frontier/ Doctors Without Borders (MSF) said,

“MSF had provided the GPS coordinates of the trauma hospital to Coalition and Afghan military and civilian officials as recently as Tuesday 29 September, to avoid that the hospital be hit. As is routine practice for MSF in conflict areas, MSF had communicated the exact location of the hospital to all parties to the conflict.

“from 2:08 AM until 3:15 AM local time today, MSF’s trauma hospital in Kunduz was hit by a series of aerial bombing raids at approximately 15 minute intervals. The main central hospital building, housing the intensive care unit, emergency rooms, and physiotherapy ward, was repeatedly hit very precisely during each aerial raid, while surrounding buildings were left mostly untouched.”

Dr. Usmani wrote on his Facebook page, the evening before the attack, “Spit, spit, spit, spit on your faces. Hey people, share this message that since this afternoon the bombers of the dirty and unclean government have been killing, maiming and wounding the innocent people of Kunduz.” He was to die soon after in the hospital bombing.