Afghanistan: Taliban take over Kunduz once again as Ghani pleads for more dollars at Brussels conference

A year on Taliban back in Kunduz (Islamic Emirate)

There was a sense of deja vu on Tuesday as the Taliban once again moved in to take over the centre of Kunduz, northern Afghanistan, one year after a Doctors Without Borders hospital within the city was targeted in a US airstrike. Despite the staff giving co-ordinates of the compound to relevant authorities, a gunship killed 42 people including three children, an incident labelled by many as a war crime. As RT reported, “according to MSF, (Medicines Sans Frontiers) the Kunduz raid, conducted by an AC-130 gunship, lasted nearly an hour and left patients burning in their beds. Some were decapitated, while others suffered amputations as a result of the strike.” 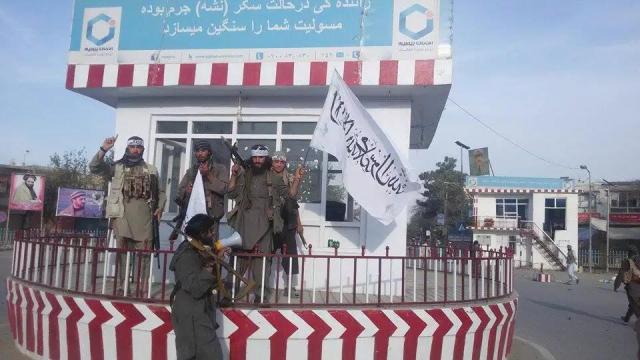 Taliban raise their flag in Kunduz 2015 (Image via Habibullah Helah)

The Taliban briefly held Kunduz in 2015, the first major urban centre taken by them since the U.S. invaded the country in 2001.

An account of the assault can be read here,

At the time Islamic Emirate claimed they had achieved all their objectives and that the liberation of Kunduz “showed military capability and moral magnitude of mujahideen” but they quickly withdrew from the city. They stated, “withdrawal from Kunduz city bazaar and government buildings is done purely for the higher interests of Jihad, the main goal of which was to secure the population from air raids and protect the human and material cost of Mujahideen from waste in a protracted defensive battle.”

Following the 2015 assault on Kunduz, Taliban accused the Kabul regime of a “brutal genocidal campaign in an effort to retake the provincial city and surrounding districts” which included alleged “shelling homes of locals with heavy artillery in Zar Kamar and Shahrawan areas of Imam Sahib district, destroying civilians compounds that were packed with innocent women and children, leaving tens of martyrs in its wake, destroying civilian property and causing intense sufferings.”

Officials waiting for evacuation at Airport as district center and HQs fall to Taliban.”

Ahmet Yar, independent reporter stated that the Taliban had split into small groups to infiltrate ANSF positions and “overran some 14 ANSF checkposts and bases in Kunduz, confiscated many caches of weapons and Humvees.” Afghan police were shown on video surrendering their weapons.

On Tuesday, Zabihulla, Taliban spokesman gave the following account of the advance into Kunduz,

“Main intersection has just been overrun by Mujahidin, attacks underway on governor compound and police HQ. PD2 of Kunduz city as well as Recruitment Center overrun, Mujahidin close to the main city intersection. Mujahidin prostrating to their Lord Almighty as they enter Kunduz city. Mujahidin reach main intersection, are warmly greeted by locals, city is secure and enemy has fled from all parts. Pure white Prophetic flag symbolizing loftiness of the Word of Allah once again being raised over the main Kunduz intersection. Efforts underway to quickly establish normalcy in Kunduz so people restart work, Mujahidin are treating people with kindness.”

On Wednesday, Zabihulla updated saying, “Mujahidin still inside Kunduz city, clashes ongoing and enemy is on the run.” Ahmet Yar reported that there was media censorship against Taliban stating, “Kabul regime warned Afghan media outlets to halt streaming Taliban gains in Kunduz and Helmand and do not broadcast their message.”

Heavy fighting between Taliban and ANSF has taken its toll this year with regular reports of defections and desertion of posts. The Washington Post reported,

“During one week in August alone, between Aug. 22 and 29, Afghan crews recovered 125 Afghan troops killed and more than 280 wounded, according to U.S. military documents reviewed by The Washington Post on Thursday. The casualties — equating to almost 18 dead per day — were spread across 37 different locations all over the country. By comparison, the worst month for U.S. forces was August 2011, when 71 were killed.”

“One week. Hundreds of dead and wounded. How Afghan forces are struggling with heavy casualties.”

The timing of the Taliban advance into Kunduz couldn’t have been worse for President Ashraf Ghani as he headed off to the Brussels Conference to plead for $3billion dollars to keep the country afloat until 2020, amid increasing security concerns. Those attending the two-day, EU-led donor event include the US secretary of state, John Kerry, and the UN secretary general, Ban Ki-moon alongside EU president Donald Tusk. Representatives of 70 countries and 30 international organizations will participate in the event pledging money for security, education and development.

A peace process was also on the agenda, EU Special Representative for Afghanistan Franz-Michael Mellbin told Reuters, “we’re buying four more years for Afghanistan….if we don’t achieve peace, it’s simply going to be extremely costly for the foreseeable future.” As Gissur Simonarson founder of @conflicts pointed out on Twitter, “the Taliban fought the greatest army the world has ever seen… and won. Probably time to negotiate at this point.”

Abdulqahar Balkhi an English speaking spokesperson affiliated with the Taliban was highly scathing of the Conference stating,

“What is point of backing a regime holed up in Kabul, riven with old rivalries & useless as a turd? What is point of dedicating couple thousand troops if they cannot even hold Kunduz and Helmand even though they were sent to prevent fall? Allies should ask US – what is the point of investing $billions into a failed regime if Kunduz can collapse in a day and Helmand next? Serious questions need to be ask at Brussels Conference about Kunduz, my suggestion is to accept defeat & cut-losses while ahead…This as US sent enablers and SOF spent entire year conducting training & bombing missions, truly a Graveyard of Empires.”

Islamic Emirate statement on Brussels Conference can be read here,

“Islamic Emirate: Another Conference for Continuation of Occupation

The Sofia Globe reported that the Prime Minister of Bulgaria, Boiko Borissov threatened to pull the military out of Afghanistan if the Brussels summit produced no solution to the situation in the country. Referring to troops and the refugee situation he stated, “we spend 80 million leva a year to keep a contingent in Afghanistan, and at this time it is peaceful and calm there. Now it would be good for them to meet and keep their commitments. It is not possible for us to accept more economic migrants.”

Khaama Press highlighted that the UK had pledged to provide up to $1 billion in aid to Afghanistan. Speaking to the Independent, Britain’s International Development Secretary Priti Patel stated that the aid will be utilised from 2017 to 2020. She said,

“The UK’s presence in Afghanistan over the last decade has helped improve security and prevent it from once again becoming a base of operations for global terrorists that would threaten the streets of Britain. We have improved the lives of Afghans significantly – with millions more children in school, better healthcare, and greater prosperity. But huge challenges remain – not least the continuing threat from the Taliban.”

Many Britons will be sceptical of the government donating to a regime riddled with corruption where those most needing aid are often sidelined especially during a time of severe cuts at home to the poor, sick and disabled which has led to suicides and cases of people actually starving to death. Thousands in the UK now rely on food banks to feed their children as highlighted by activist Ray Woolford of Talk Radio Europe who wrote the book, “Food Bank Britain’ ‘and ‘Deptford’ A history.”

Human Rights Watch however has written a letter to the Brussels Conference urging more support to Afghanistan. Again this is somewhat hypocritical given that over the years the group has turned a blind eye to major human rights abuses in the UK, ignoring letters from campaigners to hold the British government to account.

HRW appeal can be seen here,

In another twist of irony, as international aid agencies continue their message of “saving” women in Afghanistan and the need for more financial support, Agenda (alliance for women and girls at risk) along with the Joseph Rowntree Foundation published a report detailing that one million women in poverty have experienced extensive violence and abuse in England. An issue often side-stepped by the state. Katharine Sacks-Jones, Director of Agenda said, “we are calling on the Government to break the links between poverty and abuse by developing a cross-government approach to improving the life chances of women who face this combined burden.” The questions UK public should be asking…..  can Britain afford to keeping pouring money into a country where corruption remains a major problem and the security situation continues to deteriorate with Taliban gaining new ground every day?

“One week. Hundreds of dead and wounded. How Afghan forces are struggling with heavy casualties.”

“Kunduz hospital had complained of threats from Afghan Special Forces in July: A full and independent investigation into bombing is essential”

2 Responses to Afghanistan: Taliban take over Kunduz once again as Ghani pleads for more dollars at Brussels conference