Islamic Emirate: Breakdown of statistics on civilian casualties (May to July 2016) 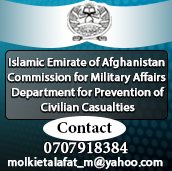 An Islamic Emirate of Afghanistan account tweeting in English by name of Abdulqahar Balkhi has tweeted the Taliban’s latest statistics for May to July 2016. Balkhi stated, they are collected by “a department (ties with Military Commission) with hundreds of personnel who investigate all incidents of civ(ilian) casualties”.

Islamic Emirate produce quarterly reports and monthly updates detailing casualties and military operations as well as weekly articles and daily updates on administration and research, viewpoints of Islamic scholars, interviews with provincial governors and reports from the battlefield.

Statistics were tweeted to United Nations, Human Rights Watch and Amnesty International. Taliban have on occasions accused these organizations of selective reporting on human rights and debated statistics via social media.

1 Response to Islamic Emirate: Breakdown of statistics on civilian casualties (May to July 2016)