JKCCS were denied their press conference with family of minor girl, the scene outside their office

Jammu Kashmir Coalition of Civil Society (JKCCS) were able to overcome an internet block in Indian Occupied Kashmir today with the support of author Essar Batool, one of five women who wrote the recently released book “Do you remember Kunan Poshpora?” (The publication tells the story of an incident of alleged mass rape by 4th Rajputana Rifles in the two villages in Kupwara district during a cordon and search operation and the victims fight for truth and justice). Batool released a statement on Saturday on behalf of JKCCS claiming their office was under siege after they had highlighted a recent case of alleged sexual abuse of a minor girl in Handwara.

Funerals of those killed during protests a common sight in Kashmir

Tensions have arisen between locals and the Indian army after a young girl described as a “minor” alleged sexual assault by army personnel. Five people including a woman were killed in the protests that followed. The Hindu reported, “on Tuesday, after the alleged molestation bid sparked protests in Handwara, two youths died in firing by security forces. Later, a woman and a youth were killed in Langate and Kupwara. The death toll of civilians has risen to five with the death of Dar on Friday.”

JKCCS were able to post an initial press release on the 14th April after it emerged that the girl was said to have changed her statement and questions arose from the girl’s mother whether this was carried out under duress. An urgent appeal was made for the release of the girl and her father stating,

“A video was released of the minor girl exonerating the armed forces of sexual assault. The identity of the victim is revealed through this video that appears to have been recorded by the police and then widely circulated by army and Indian media. The family of the girl state that she has been kept in police custody from 12 April to date. Last night, around 1 am, the father of the victim was called to the Handwara police station. He was accompanied by his brother. Since then his whereabouts are not known. The family has been denied access to both the minor girl and her father.”

“For three days, I monitored the situation closely while camping here (Kupwara) And I can say without any doubt that the J&K Police did not commit excesses. There are 90 policemen who have been injured in stone-pelting. There are policemen with teeth broken by the stones. But they showed restraint and did not open fire.”

JKCCS put out a second press release on 15th April as follows, 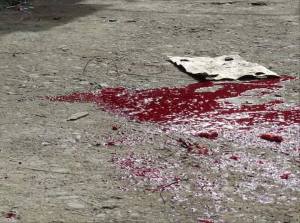 By Friday the Hindu was reporting that protests “had spread to most districts of north and south Kashmir. At least five towns in south Kashmir witnessed violent clashes between protesters and security forces. In north Kashmir, Handwara, Langate, Kupwara, Bandipora, Kangan and Baramulla towns remained on the boil.” Separatist leaders Syed Ali Geelani, Yasin Malik and Mirwaiz Umar Farooq called for a shutdown. Geelani alleged on Twitter, “Puppet administration in collaboration with occupational forces has foiled the press conference of JKCCS . the conference was scheduled to be addressed by the mother and uncle of the girl who was sexually assaulted by army but was forced to change her statement under pressure.” 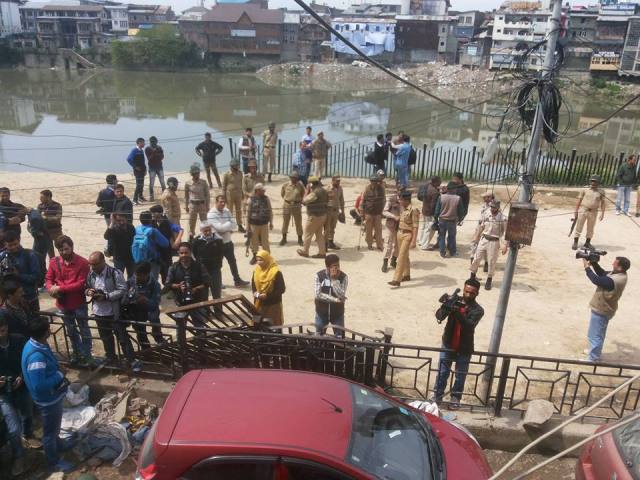 “Earlier today when my colleagues and the family members of Handwara sexual assault victim were detained by Police at our office (Jammu Kashmir Coalition of Civil Society) for barring us from holding a press conference, in which the mother of the victim wanted to prick the bubble of government lies…” (Posted by Khurram Parvez)

On Saturday 16th April, Essar Batool posted a message on her Facebook stating, “I am posting this press release on JKCCS since the internet is blocked and they have been made prisoners in their own office.” She tweeted, “Police won’t let the family speak. Why are they so scared of the truth coming out? Points towards the fact that truth will harm them.”

According to NDTV, “Chief minister Mehbooba Mufti is expected to visit Kupwara later this afternoon, where curfew is still in place. The ruling PDP has appealed for calm. ‘Forces should exercise restraint. Killings are unacceptable. We will ensure guilty are punished and justice is delivered.'” It is unlikely that this will reassure protesters and human rights activists that have witnessed decades of violence in the region and little accountability. Batool said earlier, “we have now been reduced to counting the dead! What could be more cruel a gift from the oppressor! Kashmir bleeds again.” 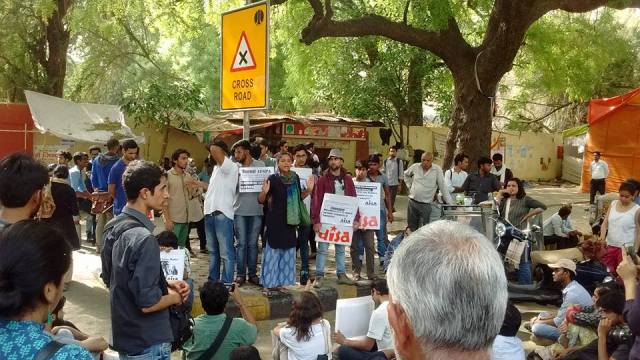 Protest in Delhi today against the killings in Kashmir

A protest is being held in Delhi today in protest at treatment of Kashmiris hosted by Sucheta De, AISA, All India Students Association and Jawaharlal Nehru University (JNU) New Delhi, the following statement was released on Facebook,

“Firing at every instance is the way the Indian Government deals with protests on basic issues of rights and dignity in Kashmir. In a shocking incident, on 12th April, armed forces personnel and Jammu and Kashmir police killed three persons – two young boys and an old woman – in Handwara, Kupwara District, and injured 24 civilians. The next day, a teenage boy, who was brutally hit by a tear gas shell in nearby Drugmula, succumbed to death in hospital. Initial reports have suggested that the armed forces fired at civilians protesting against sexual violence directed at a minor girl in Handwara town by army personnel.

Even after two days have passed these horrific killings, the army spokesperson and the Chief Minister of the state have only made tokenist statements. The army spokesperson even shamelessly stated that it would need to be ascertained if the “standard operating procedures” have been followed! On the other hand, the J&K police went on circulating a video of the molestation victim exonerating the Army and saying the molestation was by two civilian men. This is absolutely illegal and unethical.

First, the police has no right to make public the identity or the statement of the victim in a molestation case, that too of a minor girl. Uploading and circulating her video is another level of brazen illegality. Second, we don’t know if the young girl has given the statement under any duress or not. Third, EVEN if her statement is true, the Army still had no right to fire at and murder unarmed civilians expressing outrage. As protests continue in Handwara town today, the mobile internet service is suspended in several areas and curfew-like restrictions are also imposed in different parts of the state. Since Army deployment in civilian areas in the Valley, shielded by the draconian AFSPA, thousands of such killings, as well as forced disappearance and rapes have taken place.”