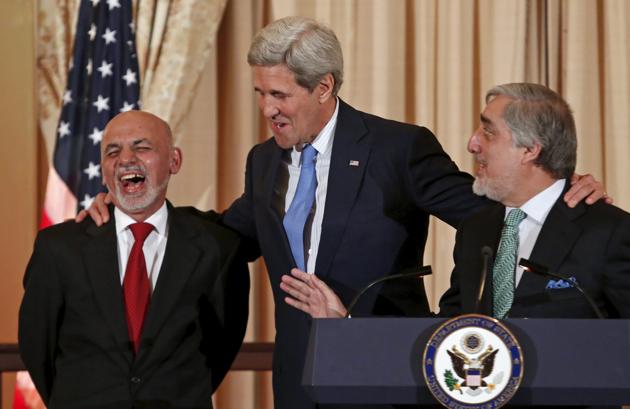 In his recent visit to Kabul the American secretary of state John Kerry once again announced the extension of the corrupt decaying regime formed by his hands which is on the verge of collapse and is deeply despised by the Afghan masses.

Nearly one and a half year ago the heterogeneous setup of ‘Ghani and Abdullah’ was formed by John Kerry to achieve and preserve the malicious vested American and western interests. And now instead of acknowledging the inefficiencies and failures of this corrupt regime, he came here to deceive our innocent people once again by announcing barefacedly the perpetuation of this crumbling corrupt regime for three more years and instigating its incongruous policies and strategies.

We ask the stooge officials including its head John Kerry, if they can show any significant progress or development achieved by them in the past one and a half year which has resulted in peace and prosperity for the Afghans!!
The stooge admin has not succeeded in restoring peace even in the capital city of Kabul. No tangible improvements has been recorded in public health sector, mafia circles and notorious warlords are dominant in Kabul and all other major cities, unemployment has sky rocketed resulting in millions skilled and unskilled youth – along with their families – compelled to leave the country.

On the other hand, it is a veritable fact that during last one and a half year, Mujahidin of the Islamic Emirate achieved significant progress against the mercenary security forces of the stooge regime by liberating tens of districts and conquering several military bases in various parts of the country.

Internally, Mujahidin’s influence and popularity is increasing by the day. The masses are disappointed and fed up with the corrupt stooge officials of the Kabul regime and therefore refer their lawsuits and other disputes to the judicial courts of Mujahidin as they feel confident of getting free fair trials.

Similarly, despite all the malicious plans and conspiracies of colonial powers, by the grace of Almighty Allah, Mujahidin of the Islamic Emirate are still completely united, organized and disciplined under a single leadership.

The pious and vigilant people of Afghanistan realize that the ridiculous form of so-called ‘national unity government’ has no justification, neither among the masses, nor in any legal or cultural lexicon. It is said that a similar strategy was undertaken by American forces in South Korea which was doomed even before its initiation.

We are confident that by the grace and benevolence of Almighty Allah, this malicious and detested stooge setup will be shattered in the wake of fresh Jihadi operations, concomitantly launched with the New Year in our country. And the time is not far off when our pious people will be emancipated from the brutality and viciousness of this stooge regime formed by John Kerry for the protection and sustenance of vested interests of foreign invaders!