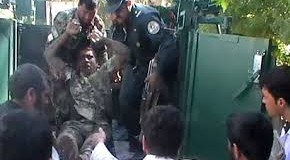 KAPISA, Apr. 1 – As many as 44 combined soldiers of ANA, police and Arbaki lapdogs have been killed and a further 26 suffered injuries during the intense fighting with Mujahideen in eastern Kapisa province, according to Al-Emarah News reports.

The enemy, supported by ground and aerial power, deployed in Nijrab district of the province about 21 days ago.

There have been clashes between the enemy and Mujahideen since.

The enemy operation, however, ended in route yesterday and they retreated with fatal losses later Thursday.

Fighting have raged caused in the past couple of days in which some 44 puppets are said to have been killed and more than 26 others suffered injuries. A number of the military vehicles and armored tanks were also destroyed in the operation.

The sly enemy claims that 30 Mujahideen fighters have been martyred in the operation is false and groundless.

According to credible sources at least two Mujahideen combatants have embraced martyrdom and three others sustained injuries since the enemy launched the operation 21 days ago.