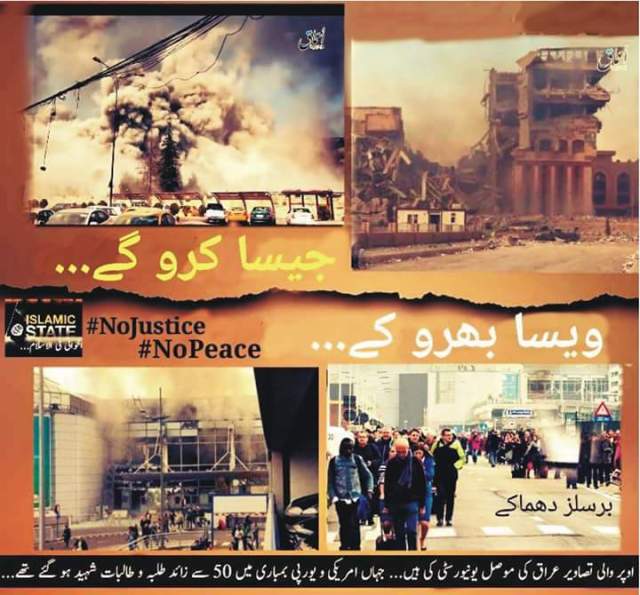 “Blood for Blood” (posted by IS supporter)

In recent days, Amaq media which reports news from the Islamic State (IS) claimed Coalition airstrikes had targeted the University of Mosul, Iraq, dated 20th March 2016. A video was released entitled, “Mosul – First Instants of the American Bombing on the Majmu’ah Yesterday”. Mosul is known as a public university and one of the largest educational and research centers in the Middle East. It is the second largest university in Iraq after the University of Baghdad.

Video footage from Amaq showed a man pointing to the sky, aircraft could be heard, terrified cries, car horns and huge clouds of smoke and dust rising above the university building. Bodies could be seen on the ground amidst the debris.

A further news post under “headlines” was published within the last 24 hours entitled, “Breaking: 6 women and 2 children killed by US airstrikes on faculty housing inside Mosul.”

“CNN confirmed the strikes with two sources: someone inside Mosul University and with Athil Al Nujayfi, the former governor of Nineveh province, where Mosul is located.

Nujayfi, who says he maintains a network of contacts and a militia loyal to him inside Mosul, said 17 senior ISIS fighters and numerous local leaders were killed in the strikes, which he called a “blow” to the terror group.”

Iraqi News also reported the strikes stating, “The coalition aircraft targeted a security headquarters belonging to ISIS in the University of Mosul, killing dozens of ISIS members, including Arab and foreign nationalities.”

However the question remains… how could Coalition forces justify targeting a university which is utilized as a main learning resources for thousands of civilians, students, lecturers and houses administration and support staff who may or may not support the Islamic State? Isn’t this a war crime?

Mosul University before the airstrikes (posted by Dr Dahlia Wasfi, from @MousaAlomar) 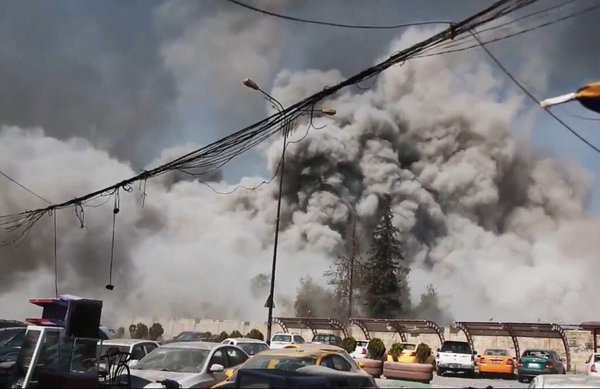 Dr Dahlia Wasfi, Iraqi-American physician and peace activist posted two “before and after” photographs on Facebook showing the devastation, writing the following,

“This past weekend marked the 13th anniversary of the start of the illegal Shock and Awe invasion of Iraq. Yesterday, an American plane dropped a bunker buster bomb on a women’s dormitory at Mosul University, in the name of targeting ISIS. Scores dead and injured. Shock and Awe continues.”

“As the wall to wall coverage about Brussels dominates the airwaves, guess who murdered 40 students in a University?

Coalition airstrike on the University of #Mosul captured live on camera. Where’s the world?

Mosul Eye which is anti-IS news site alleged the following regarding the strikes on Mosul University (this could not be independently verified),

The targets were as follows:

– The University’s headquarters – the new building:
ISIL uses it as a command center for its intelligence operations. It is totally destroyed and about 8 of ISIL Intel and militia leaders and 18 fighters at this site.

– The University mall building:
ISIL uses it as the central communication center. ISIL’s communication Commander and 8 other fighters were killed and totally destruction of ISIL’s modern telecommunications equipment in addition to the spare Albayan Radio database were all destroyed.

– Marriage and Contracts center:
Behind Alkarama Cafe, a building ISIL uses to conduct marriage deeds, where three of ISIL’s Shar’i leaders and six other fighters were killed.

– Ammunition manufacture workshop at the university’s old headquarters and the girls’ college of education:
Total destruction of the building and large supplies of equipment and ammunition were destroyed and six of ISIL’s fighters were killed at the site.

– Alhisba center:
One of ISIL’s offices inside the university of Mosul, totally destroyed and three of Alhisba leaders and nine fighters were killed.

Islamic State emphasise the civilian casualties but their status with regard to IS role at the university could not be independently determined.

The strikes took place in broad daylight when the university would have been most heavily used. If the civilian casualties figures are correct, it is a huge price to pay for taking out alleged IS operatives. Mosul Eye also claimed, “Dr. Dhafir Ramadan Matar Albadrani, the former dean of the College of Computer and Arithmetic sciences and his wife were among the fallen civil causalities of today’s air strike at the professor’s residential buildings behind the university of Mosul.”

Ashraf, father of 2 children, worked at a call phone store near Mosul University (Via @zyaad_alsenjary )

TeleSUR also reported on the Mosul airstrikes quoting the Rome Statute of the International Criminal Court and the Geneva Convention in relation to protecting civilians in conflict zones that should not be deliberately targeted. Where combatants are suspected to be embedded with civilians, the emphasis is on protecting civilians. TeleSUR reported,

“Chris Woods, director of the Monitoring Group, Airwars told TeleSUR his group had seen, ‘credible evidence of 25 or more than civilians killed’ in the March 19th attack which he said was ‘shocking in its ferocity and reckless in its apparent disregard for human life”

Colonel Steve Warren, spokesperson for the US Coalition was also reported by TeleSUR stating that if there was “credible evidence” of allegations in relation to civilian casualties at Mosul, the information would be reviewed and investigated further.

See “Did the US just admit to carrying out war crimes in Iraq?”

Prior to the Brussels attacks, IS were keen to highlight the attack on civilians in Mosul to media claiming western double standards on human rights, that a Muslim life was not treated as equal to the lives of non-Muslims. It is well documented that the US have bombed and droned weddings, funerals, hospitals, clinics, schools with a muted reaction from the west. One recent example was the bombing of Kunduz hospital in Afghanistan where patients were recently burnt alive in their beds following airstrikes see following link,

North Atlantic Treaty Organization, NATO’s headquarters are located in Haren, Brussels where the Supreme Allied Commander also resides. Belgium is also a hub of the arms trade. Belgium has also become a key location for IS fighters residing in Europe. Statista graph shows the estimated number of IS fighters in the country compared to others in Europe, see below.

Yesterday Brussels was hit by deadly blasts at at Zaventem international airport Brussels shortly before 8am and a further blast at Maalbeek metro station soon after which left at least 34 dead and over 200 injured. See following link for full story,

Although the recently IS statement did not specifically name the airstrikes on Mosul University in their official statement on Brussels, the arrest of Salah Abdeslam, a suspect in last year’s Paris attacks in the Belgian capital and the killing of civilians in Mosul may have spurred on IS to speed up execution of their terror campaign. They targeted “crusader Belgium, which has not ceased to wage war against Islam and its people.”

IS promise “black days for all crusader nations allied in their war against the Islamic State, in response to their aggressions against it.” Mosul and Brussels were being linked on a number of IS related sites and accounts with comments as follows, ” the Brussels attack was the answer to the mosul attack …..” “blood for blood”, “eye for an eye” 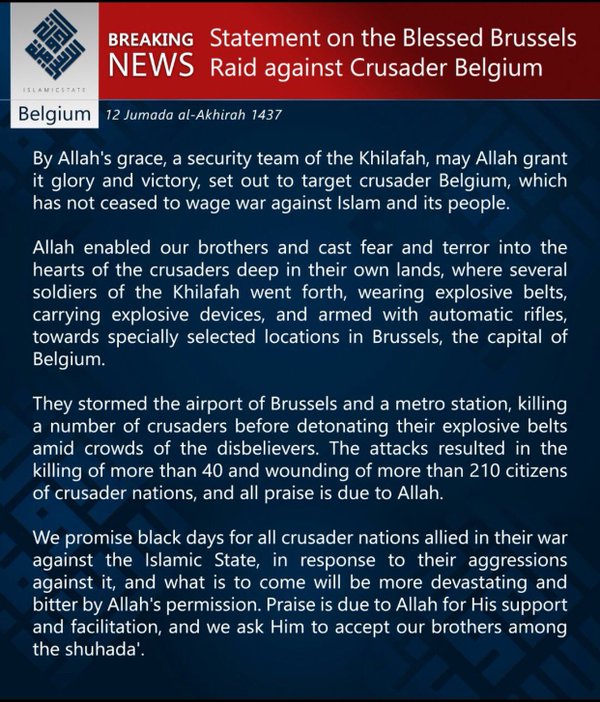 IS statement on Brussels attacks

There are areas of the world such as Mosul that may be difficult to monitor in relation to news. It is hard to verify independently information coming from the city. There are valid concerns that this may also be seized as an opportunity by the west for indiscriminate bombing in attempts to disable IS. The Brussels attack had 24 hour in depth media coverage reaching around the globe. In comparison Mosul University was barely featured.

“UPDATED INFORMATION from contacts in Mosul: the airstrikes at the University hit administrative headquarters; the College of Science; University publishing center; women’s dormitory; vocational high school within the campus; and the women’s education college. The impact of the massive explosions also caused death and destruction in restaurants and shops in front of the university.”

What constitutes enough credible evidence to warrant an investigation? How many more attacks on civilians are going unnoticed and who will ensure accountability for upholding the rights of the most vulnerable within hard to reach conflict zones?