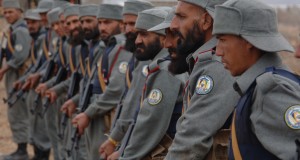 URUZGAN, Mar. 20 – Officials reporting from Char Chino district say that the operation launched by Mujahideen on Sunday in Hoshi area located 2 km from the district administration center was paused at 04:00 am local time today.

Enemy claims that they have retaken the said area and inflicted heavy casualties on Mujahideen are baseless, the only change in the situation is that of US-nato choppers hovering in the sky.

Only 3 Mujahideen have been injured in the entire fighting while 3 enemy check posts and a base have also been overrun with 4 enemy corpses still laying in side the base, reports say adding that a mortar tube with 80 rounds, Dshk heavy machine gun, 82mm recoilless rifle with 100 rounds, 8 US rifles, 100 RPG rounds and a sizable amount of other equipment was seized.

Similarly 16 police officers along with 2 commanders repented their mistakes and surrendered to Mujahideen, bringing in all their weapons, ammunition.