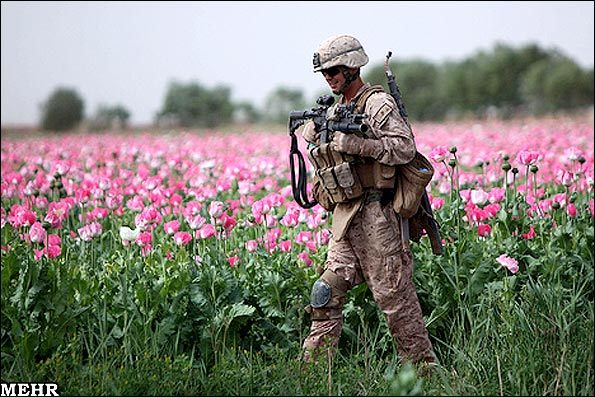 During the blessed era of the Islamic Emirate, narcotics were banned and the decree of His Excellency the late Amir-ul-Momineen Mullah Mohammad Umar Mujahid (may his soul rest in peace) about the prohibition of poppy cultivation was warmly welcomed by the masses and in a remarkably short span of time, Afghanistan became a drug free country which was admitted by the outside world too.

Unfortunately poppy cultivation became the emblem of our beloved country Afghanistan after the brutal invasion and illegitimate foreign occupation on top of various other adversities. A heart-wrenching reality that more than three million people including children and women are now addicted to this poisonous and devastating drug in a sparsely populated country like Afghanistan.

Though the foreign invaders and their internal stooges launched some impressive but shallow projects and campaigns to prevent this menace which adversely affected the issue due to the insincerity of its planners and instead of eliminating or reducing poppy cultivation, it was multiplied manifold as the number of addicted people is increasing day by day.

Despite all the anti-drug slogans and vows of foreign occupiers, there are verified and authentic reports which prove that they are themselves largely involved in drug trafficking which is exported from Afghanistan on regular basis via military planes and various other means to Europe, America and several other black markets of the world.

The case of internal stooges is no better than their foreign masters as the puppet Kabul regime is thoroughly involved in this malicious business. The number officials not involved can be counted on fingers tips. High ranking officials like some advisors of presidential palace as well as most of the ministers, governors, military commanders, district heads and numerous other low ranking officials are the active members of regional and international drug mafia. Verified reports have been published in local and international media on various occasions in this regard.

The stooge Kabul regime which vows the comfort and prosperity of ordinary people has not been able, despite the countless foreign add and funds, to build a single well-facilitated hospital throughout the country for the treatment and reintegration of addicts who are left with no other option but to turn to neighboring countries for cure.

The souvenirs of western invasion for Afghanistan are insecurity, deterioration of economic situation, increased unemployment, rising prices of basic commodities, spread of poverty and the wide-spread corruption in each and every department of the stooge admin. It was unprecedented in our culture and history that the poverty-stricken Afghans sell their detached parts of their own bodies (i.e. their off-springs) in the market. Obscenity has become order of the day, alcohol, heroine, hemp-extract and opium are widely popularized among the masses of our pious homeland.

With the exception of a negligible number of people whose vested interests go parallel with the malicious objectives of foreign invaders, the vast majority of people are longing for the golden era of the Islamic Emirate when there was ideal peace and stability under the shadow of Islamic Sharia. When there was no corruption, no nudity and obscenity, the people were comparatively self-sufficient from economic point of view. Basic commodities and requirements were largely available for reasonable prices to the common people. On the other hand, narcotics and other detrimental substance was completely eliminated from ninety five percent territory under the control of the Islamic Emirate. Unfortunately, after the malicious invasion of Afghanistan, it has been enlisted in the major poppy cultivation countries of the world!!!