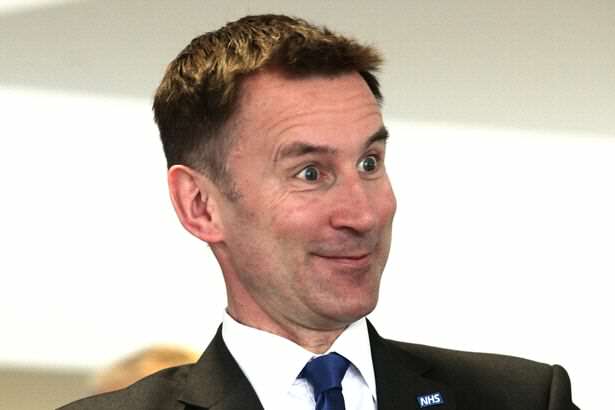 Hunt failing haemophiliacs, unanimous winner of the “Dick of the year” poll

Secretary of State for Health Jeremy Hunt, now appears to have given himself extraordinary powers which could enforce a change of Trust deeds that came about as a result of a legal dispute with haemophiliacs infected with HIV through contaminated NHS plasma. Factor concentrates were manufactured using the plasma of virally “high-risk” prisoners in the US. They were given to haemophiliacs that have a bleeding disorder which affects the blood clotting and required blood products as part of their treatment.

In 1991 haemophiliacs signed up to an ex-gratia out of court settlement on the advice of their lawyers. At that time “the worst medical treatment disaster in the history of the NHS” was portrayed as an “unavoidable accident” in an attempt to con victims and the general public. Documents were trashed, key evidence hidden and positive HIV and hepatitis C results withheld for years in an attempt to prevent litigation and deny full compensation. Labour has since changed the narrative and admitted this tragedy was due to “negligence of public bodies”.

The Macfarlane Trust was set up to care for haemophiliacs and their families under the following Trust deeds,

Under a recent so called Consultation process which the haemophilia community was led to believe would improve their situation, Hunt plans to reduce payments to sick and dying haemophiliacs and strip away key allowances such as a winter fuel payment, support for children and pre-paid prescriptions. Many rely on monthly allowances and beneficiaries of the MacFarlane Trust could now lose as much as £6,244 a year as their health worsens.

Haemophiliacs are expected to fill in a questionnaire which in many cases gives a choice of options which only lead to poverty. The Haemophilia Society which represents those with bleeding disorders wrote to members saying,

“The Department of Health in England has launched a consultation on the support for people with contaminated blood. The Haemophilia Society  has deep concerns about this and has prepared information  for our community to help them campaign  for it to be withdrawn.”

Several years ago the Department of Health tried sneakily to change the Deeds of the MacFarlane Trust to incorporate a new financial scheme for haemophiliacs infected with hepatitis C through NHS blood products. However when this was challenged following legal advice, the move was deemed to be illegal. In a positive move the Skipton and Caxton were set up to help those infected with HCV but done so in a way that could not affect the MacFarlane Trust Deeds.

In a plot that is both devastating and confusing to victims, Hunt now wants to amalgamate different trusts under one body and alter allowances which would very likely affect the deeds. The payment scheme is already described as “woefully inadequate”. Many see Hunt’s actions as simply a cost cutting exercise at the expense of those already severely harmed by the state. Although payments are discretionary and vary, it would be cruel and bizarre to suddenly strip haemophiliacs “primary beneficiaries” and widows/partners of much needed allowances that they have relied on for years when their need remains the same and often greater as time passes.

It appears haemophiliacs did not die quickly enough for Hunt and the introduction of such a scheme seems set to hasten their decline.

The Haemophilia Society issued the following letter to members to forward to their MPs and other interested parties,

To Whom It May Concern,

I am writing to you regarding the Department of Health’s Infected blood: reform of financial and other support consultation.

As a member of The Haemophilia Society and of the affected community, I want to express my deep dissatisfaction with the proposals contained in the consultation. I believe that, far from delivering the vital reforms needed by those affected, the majority of people who currently receive support will be financially worse off under the new scheme.

Despite the announcement of additional funding of £125 million, the proposal to remove discretionary payments such as winter fuel allowance, child supplements and low income top ups mean that many people will lose out, potentially by thousands of pounds a year.

The Haemophilia Society has serious concerns on other aspects of the proposals, including:

“I am concerned that proposals to effectively end regular support for survivors after one year fail to appreciate the financial and emotional impact of a partner’s death. Again these are extremely harsh.

Also, non means-tested financial support plays a key role in enabling bereaved people to return to paid work or retrain if they have been out of the labour market because of being carers.”

Campaigners have written to the Haemophilia Society and to MPs to highlight that the Consultation process is extremely flawed. Key campaigners were discriminated against and excluded from an initial meeting with a DOH appointed facilitator. They were furious that they did not hear about the meeting until AFTER the event.

A DOH questionnaire (which as usual does not have a named author) was sent out to haemophiliacs and families  The forms delivered to a very vulnerable community would be very unlikely to pass an ethics committee. The questionnaire was immediately identified as gender biased against women, a matter taken up several years ago with Anne Milton (former DOH). Promises were made to tackle this problem. The process contains no safeguards should those receiving such a document have a severe reaction and become suicidal. There are already suicides linked to the general benefit assessment system where allowances have been reduced.

Hunt is now viewed by many as a danger to the nation’s health. He has already angered the medical profession with an enforced contract for junior doctors that would put patient safety at risk and place an increased strain on doctors with changes to working hours and pay.

“Junior Doctors chant “Hunt must go” and “Not Hunt’s Slaves” as masked protest takes to the streets of London.” 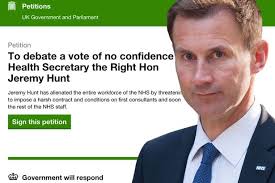 Over 260,000 signatures in a “vote of no confidence” and growing

The public are so disillusioned with Hunt, many have now signed a petition set up 2 days ago calling for a vote of “no confidence” which may force a debate in parliament,

Haemophiliacs may be in poor health but as many have already showed they will die fighting. Instead of being able to live out the rest of their lives in peace, those given “bad blood” will have little choice but to battle on for justice. Hunt has been described in the Guardian as an “ethical columnists nightmare” such is his behaviour. He has also been unanimously named “Dick of the Year” by viewers of Channel 4’s comedy current affairs show The Last Leg according to Huffington Post.

Any change to the MacFarlane Deeds will be challenged strongly by haemophilia activists along with the Consultation proposals that are a disgrace to the Tory government. The Department of Health has become the new radicalizing arm of the state through its repeated financial rape of the sick and vulnerable. It has turned mild mannered patients into fierce warriors gunning for government.

“Betrayed by the State: Haemophiliacs given blood from tortured US prisoners now face enforced poverty at the hands of Hunt”