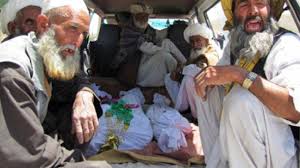 On Monday 8th February, ‘Chinar’ and ‘Tambail’ villages of Khakrez district in Kandahar province were raided by the brutal foreign invaders in collaboration with their internal stooge forces. According to the local eye-witnesses, no sooner had the savage foreign troops entered the houses when they opened indiscriminate fire on the civilian people in which several people were martyred and injured. Some people who fled their homes in panic to save their lives were targeted by drones in which many more people were martyred and injured.

In this catastrophe 16 ordinary countrymen were martyred, 8 others were injured and colossal financial losses were inflicted on the local dwellers.

Local people and members of the bereaved families wanted to shift some corpses, martyred in this massacre, to the central city of Kandahar to protest against the internal stooge regime and their brutal foreign masters but they were halted by the internal mercenary forces in ‘Sozniyan Manda’ area of Arghandab district and were not allowed to enter the city.

In the past the foreign invading forces used to justify such brutalities as retaliation against the Taliban attacks from residential areas. But in this case even this lame excuse was not applicable as neither was there any fighting nor was any fire opened on foreign forces. There was complete calm and the local people were deeply asleep when they became the victims of this carnage.

With the inauguration of (dis)Unity regime, on one hand, the day and night military operations of foreign occupying forces have increased in number and subsequent civilian losses and on the other hand, numerous civilian people were martyred and injured in the indiscriminate use of heavy artillery provided to the amateurish internal (in)security forces. Moreover many more civilian people were incarcerated, their houses were destroyed and their crops devastated.

In the beginning of this heterogeneous stooge regime, more than fifty ordinary civilians mostly women and children were martyred when a house, where the innocent people were enjoying a wedding ceremony, was hit by mortar shelling indiscriminately fired by the internal stooge forces in Sangin district of Helmand province.

Similarly thirty six ordinary countrymen were martyred and several others were injured in Ali Shair district of Khost province when a funeral ceremony was targeted and hit in an indiscriminate drone strike of the savage foreign invaders.

Regretfully saying the supporters of human rights and so called claimers of freedom of speech are utterly silent on this recent felony of Khakrez district. They have not been slightly moved by this brutal slaughter of their own people to condole the bereaved families or at least to condemn this felonious act of the foreign invaders.

If the claimants of freedom of speech want to prove their impartiality and the human rights supporters are truly committed to their cause they should break their silent on this recent as well as all previous offences of both the foreign invades and their internal stooge forces. It is their responsibility to raise the voice of the oppressed Afghan masses in national and international forums against the barbarity and brutality of foreign occupying forces and their internal mercenary forces!!!