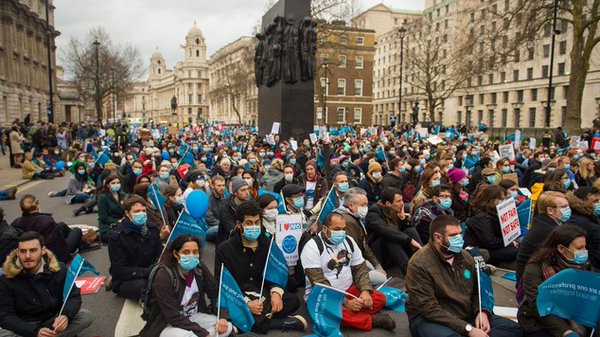 Thousands of junior doctors wearing surgical masks took to the streets of London for the third time on Saturday defying Health Secretary Jeremy Hunt, the dictator of the NHS, a man whose cut-throat tactics would not go amiss in an ISIS video. Men and women who form the backbone of the health service are fighting for a fair and safe contract for junior doctors and one that does not put patients at risk. Hunt aims to change working hours which many fear will not have enough safeguards to protect both doctors and those they serve. The Daily Telegraph highlighted,

“new contract proposals is a change to the ‘sociable’ working hours for doctors. These would be altered from 7am to 7pm Monday to Friday, as they currently stand to 7am to 10pm Monday to Saturday. This would mean that doctors who are currently paid a higher rate of pay for working outside 7-7 will now have to work until 10pm, and on Saturdays, for standard pay.”

Doctors and nursing staff chanted “Hunt Must Go” and carried placards with the words, “Not Hunt’s Slaves” one woman posed for a photo wearing a mask with the word “Anger” covering her mouth.

Johann Malawanna, NHS Obstetric Registrar, Chair of JDC, stated, “events of last 6 months show talent of junior doctors. Whenever I asked for help whether mathematical, organisational someone stepped up. I wish the NHS valued and understood the resource they are throwing away with how badly they are treating my friends and colleagues.” Rachel Clark, a junior doctor tweeted, “Mr Hunt, you are driving away junior docs in droves and presiding over a recruitment crisis. Catastrophically unsafe.”

Sir David Dalton, a senior NHS boss was called in by Hunt to negotiate with the BMA on behalf of both NHS Employers and the Department of Health but talks have broken down. A strike is now set to go ahead next Wednesday. An earlier day of action was held on January 12th when around 38,000 medical trainees observed a 24-hour walkout to draw attention to their concerns.

Well done to @RoshanaMN for a happy and safe March. She was post night shift #saturdayslave #huntsalvery (Image via Dr Michelle Tempest)

A sit down and mask protest by #juniordoctors – feels sad to be here. Hope they all stay in the #NHS (Image via Dr Michelle Tempest) 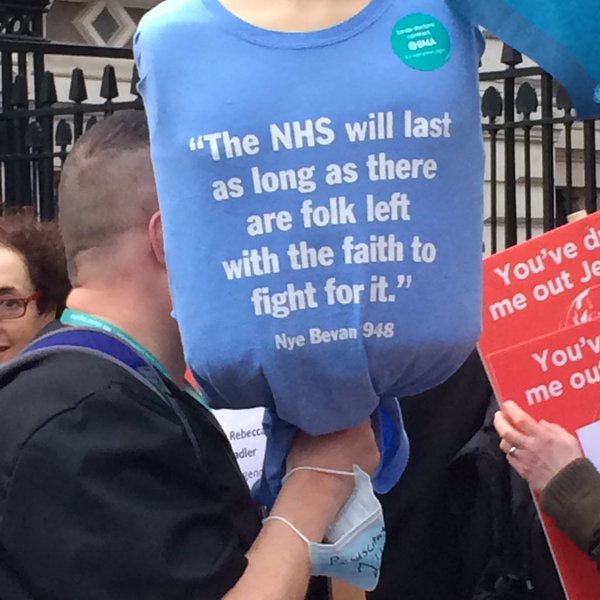 “It is particularly frustrating the Government is still digging in its heels. We have talked in good faith over the past few months, but have seen no willingness on their part to move on a core issue for junior doctors

“The government misrepresents junior doctors as a block to a seven-day NHS, but they already work every day of the week. We are asking that this is reflected in fair and affordable recognition of unsocial hours.” 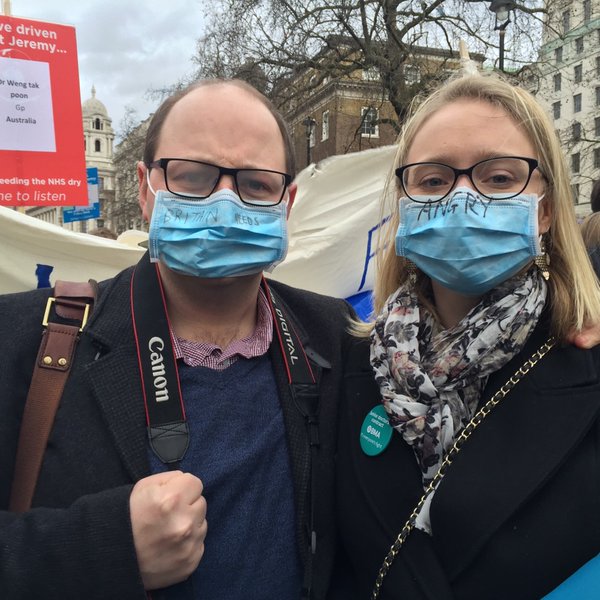 The public are standing with the medical profession with doctors receiving support both at home and from overseas. Dame Vivienne Westwood and Vanessa Redgrave joined protesters, others supporters speaking up for docs include Peter Capaldi (Dr Who) and Sir John Hurt.

Messages of solidarity have come from as far away as New Zealand and from medics in Gaza and Hebron, Occupied Palestine whose own challenging conditions have included working in a conflict zone and witnessing Israeli security services shoot dead a hospital visitor in front of patients.

“The Junior Doctors’ Debate In 2 Minutes”