Use of child soldiers a “war crime” so why are western governments funding them in Afghanistan?

The tragic death of a young child Wasil Ahmad (age 10) in Tirin Kot city, Oruzgan Province, Afghanistan has intensified the controversy over the use of child soldiers and brought into question the role of the west. Two days ago, Abdulqahar Omeri a journalist with Tolo posted a photo of a boy dressed in a uniform including helmet and holding a gun clearly out of proportion to his small body. Omeri tweeted,

This Child police was killed in by #Taliban in Uruzgan province in southern #Afghanistan on Monday. Via @pajhwok

Earlier this year Tolo news reported that the Taliban (known as Islamic Emirate of Afghanistan) were accused of “recruiting children to fight on the frontline in Kunduz and Badakhshan” by several officials including Gen. Murad Ali Murad, the deputy chief of staff of the Afghan National Army. Qazi Nazir Ahmad Hanafi, an MP stated, “Sharia Law does not allow such an act – to recruit children in war. The Taliban will not hesitate to do any bad act.” However in October 2015, photos emerging from Kunduz showing that local police and militia were accompanied by very young boys dressed in uniform appearing to have an active role on the streets but this was largely ignored by international media. Civilians from Kunduz spoke on condition of anonymity stating they were being intimidated by these youngsters who harassed them in their homes.

The Taliban and Tolo (regarded as western-backed media) have long been in battle accusing each other of propaganda which intensified at the time the Taliban took over Kunduz. Tolo alleged the Taliban had committed “gang-rape” strongly denied by a spokesperson for the Islamic Emirate. Bashir Ahmad Gwakh, an Afghan journalist pointed out that the Higher Education Minister, (Dr Farida Mohmand) stated that, “Tolo’s baseless report about rape in Kunduz university hostel has caused serious damage to female education and because of this girls are scared to return to university.” This and other alleged misreporting culminated in Taliban attacking a mini-bus of employees belonging to Kaboora production company that work alongside Tolo, part of the Moby Group, in which 7 people died and 25 others were wounded.

The Taliban also hit back at the child soldier recruitment allegations with a statement condemning the practice of using child soldiers in December 2015 after the Independent Commission for Human Rights in Afghanistan expressed concerns regarding the presence of minors in their ranks. Islamic Emirate issued a statement which included the following,

“The Human Rights Commission did not present any evidence to support its charge. They merely relied on the accusations brought forth by the Kabul regime’s authorities for propaganda purposes. Relying on such accusations they brought forward their charge regarding the presence of child soldiers in the ranks of Mujahideen.

Last month, during the Amir ul Mumineen’s (May Allah SWT protect him) speech – broadcast through the military radio communications – the leader of the Mujahideen inter alia also stated that “do not allow children and young teenagers within your ranks. Those youth members whose beards have not grown fully and who wish to join the Jihadists ranks should [instead] continue their education and serve their parents”. 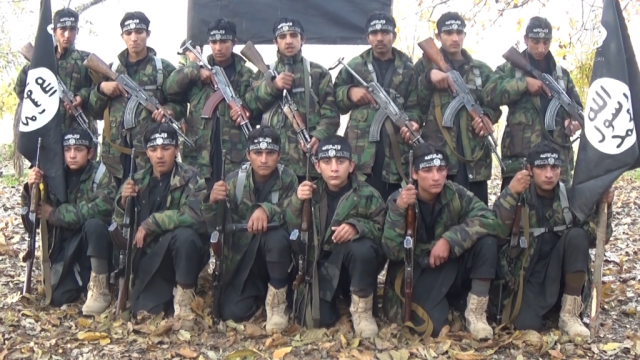 According to Long War Journal, Islamic State (present in AfPak since the summer of 2014) openly promote weapons training for children in military style camps, though it is unclear at what age they participate in combat in this region. IS in Iraq and Syria have already shown minors killing captives in the field as part of their video releases. Wilayat Khorasan as IS are known in Afghanistan, Pakistan released a video recently entitled,  “Cubs of the Caliphate Camp”. Long War Journal wrote,

“the training camp appears to be relatively small compared to others operated by the group in the region. Most of the training shown is weapons related, including how to properly handle and fire different variants of the Kalashnikov assault rifle. The last instructions shown include training in small unit tactics in an open field.”

On a social media site that posts on IS, Al Hussein al Hindi had this to say, “don’t you know about Hazrat Muaz and Muoviz R.A, they are companions of Rasool SAW, who are child, they were killed Abu Jehal, so for mujahid and jihad there is no age needed, a mujhaid can be a 8 years child also.” Another person who uses the image of a rose stated, “it might be possible that government own soldiers killed him to defame mujahideen . moreover, if someone joins the ranks of enemy whether she is a woman or old man or a boy to harm shariah struggle than it is necessary to kill him in that situation … moreover, Prophet Mohammad (Peace Be Upon Him) mentioned that do not kill innocent people in war especially women ,children and aged people.”

To return to the US, New York Times published an article on Tuesday with a title that appeared to glorify children on the battlefield… “Taliban Gun Down 10-Year-Old Militia Hero in Afghanistan.” Wasil Ahmad age 10 was praised by the Afghan government and hailed a hero “for leading a militia’s defense against a Taliban siege last year”. According to NYT, the boy’s uncle Mullah Abdul Samad was a Taliban commander who switched sides in favour of the Afghan government along with his men and Wasil’s father. The Taliban are said to have shot Wasil dead outside his home, it is claimed he had left the militia to return to school.

Instead of discouraging him, local officials let 13 yrs-old #Wasil join police in #Uruzgan. He was Killed yesterday

Wasil Ahmad (10) whose childhood was stolen (Image via Mirwais Afghan)

US and allies appear to have double standards on child combatants. On the one hand highlighting and condemning the practise but prepared to close a blind eye when it suits as they often have with Bacha Bazi, Afghanistan’s young dancing boys also used for sexual pleasure, see following link, 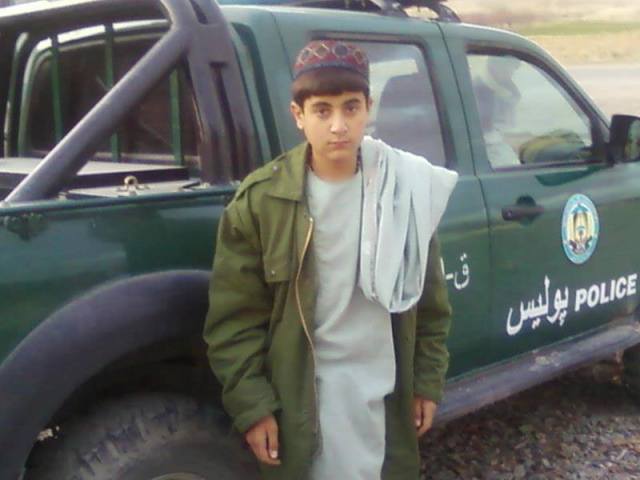 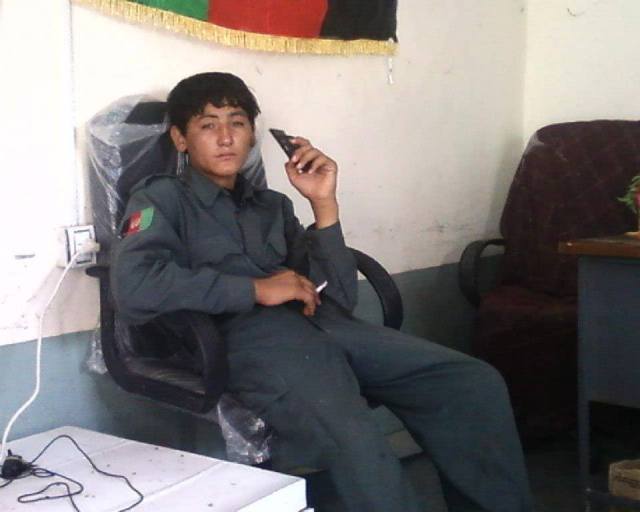 US train and fund militia and police in Afghanistan yet don’t appear to take any measures to stop the recruitment of child soldiers. They cannot deny it is happening when NYT points out that Rafiullah Baidar, a spokesman for the Afghan Independent Human Rights Commission both receives complaints on this issue and highlighted the fact that the provincial government had “broken the law by parading Wasil in a police uniform after the Taliban siege was lifted”. The following website lays out the minimum age a person can fight and violation of this is considered a war crime,

“In contrast with the Islamic Emirate’s Shariah-compliant policies, the Kabul Administration’s military, police and local militias are staffed with children as young as ten, twelve and fourteen years of age. This epidemic is so widespread that we can hardly find a single military base, road block, or check-post that do not have any under-age children in their ranks.

Media reports and website archives abound with video records showing that the majority of Kabul regime’s local militia commanders use under-age children for military purposes in addition to fulfill their twisted desires. Numerous times local people have complained to authorities that these local militias keep under-age boys in their bases for immoral purposes.”

NYT alleges Taliban use of child soldiers but does not appear to report Islamic Emirate denials or tackle the US government and military on this issue.

Use of child soldiers for fighting and other purposes widespread in #Kabul regime, where is #UN condemnation? 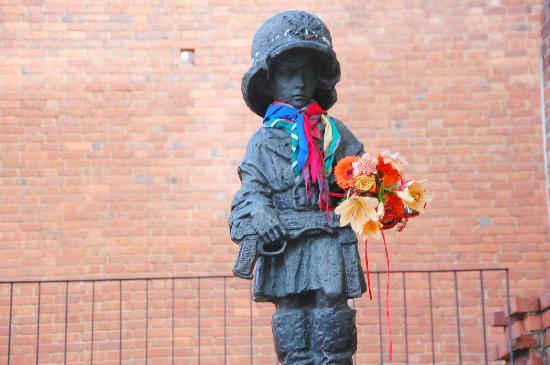 There is condemnation of the Taliban for killing Wasil but where are the human rights groups to condemn the fact that Wasil and other boys are recruited, armed, active in combat, praised for their actions and awarded medals often at the expense of the US that claims to champion human rights around the world?

Another western country Poland still commemorates its child soldiers from the Warsaw ghetto uprising during the Second World War who are remembered as heroes with a monument to the “Little Insurgent”. As professional Warsaw tour guide Ewa Bratosiewicz states in her blog,

“On October 1, 1983, the most poignant of all Uprising monuments was unveiled by the walls of the Barbican, along Podwale street in Warsaw’s Old Town. Designed by Jerzy Jarnuszkiewicz and funded by collections undertaken by scouts, the bronze installation shows the figure of a boy soldier clutching a Sten gun and weighed down by an adult-sized helmet. Commemorating the children who served as messengers and frontline troops.”

A little insurgent in a battle outfit (Bundesarchive Photos 1933 -1945)

There are gross double standards from the west on this issue as criticism is often levelled against insurgent groups using minors whilst the problem of western governments and their allies supporting and commemorating child soldiers is simply swept under the carpet.

“U.S.-funded Afghan police prey on those they’re paid to protect”