Islamic Emirate: Foreign occupation is the root-cause of all adversities!!! 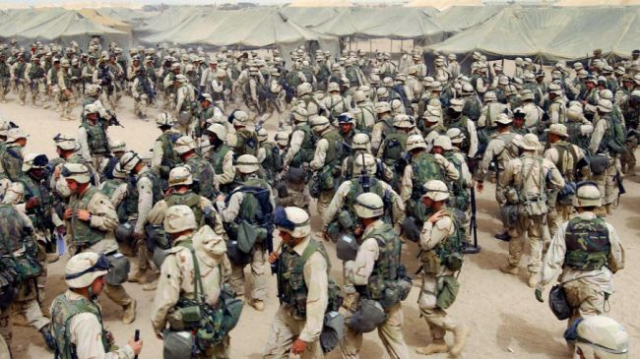 Fifteen years ago, our beloved homeland Afghanistan was invaded by the brutal American and allied forces under the pretext of 9/11 incident. This futile war took them nearly one and half decade. Now this deceiving arrogant power plans to prolong this war for another decade under the self-initiated conspiracy of ‘Daish’ (i.e. ISIS) inside Afghanistan.

The Washington Times quoting officials of Pentagon reported that American authorities are weighing prolonging presence of thousands of armed forces for several decades inside Afghanistan under the lame excuse of her defence.

Indubitably the American and other western media channels aired massive propaganda aimed at deceiving the innocent masses and exaggerating the existence and menace of ‘Daish’ in Afghanistan. Their savage actions were published with vigorous intensity. The whole idea was to frighten the masses of Afghanistan and subsequently to subdue them without any fear of resentment.

When the Americans realized that the so called Afghan national army, unrestrained Arbaki militia and ‘Gilam Jam’ militia could not succeed against the Taliban due to incessantly losing their fortified basis and vast areas, they instigated some other individuals and groups under the name of ‘Daish’ while chanting some sacred and striking slogans by their fighters. Their foremost endeavour was to halt the swift progress of the Islamic Emirate in various parts of the country and destabilise their ranks by spreading confusion and ambiguity among them. The ultimate and malicious objective of this conspiracy was to pit Taliban against ‘Daish’.

By the grace of Almighty Allah and due to the judicious tactics of the discerning leadership of the Islamic Emirate, this devious and malicious conspiracy of Americans was axed in time which not only deracinated ‘Daish’ from its sanctuaries but our Mujahidin fearlessly and courageously fought against the brutal foreign invaders as well as their internal mercenary forces throughout Afghanistan in which huge amount of ammunition including all kinds of light and heavy weaponry was confiscated, making Mujahidin self-sufficient for the foreseeable future.

The American authorities contemplate that ‘Daish’ is a potential threat for Afghanistan, for which their prolonged existence is inevitable but our people have realised that it is no more than a pretence because the fictitious strength of ‘Daish’ has been eradicated and dispersed by the heroic Mujahidin of the Islamic Emirate. By the grace of Almighty Allah, their forces have been crushed and pushed back from all areas with the exception of one or two border districts in Nangarhar province.

In spite of these facts, if the American policy makers still consider ‘Daish’ as an imminent threat thus justifying presence of their armed forces for decades more, it is obvious that their ultimate malicious objective is the oppression, persecution, killing and subjugation of freedom loving people of Afghanistan.

In the recent meeting of ‘Pugwash’, representatives of the Islamic Emirate elaborated the prevailing ground realities and unequivocally expressed their stance regarding the existence of thousands of American combat forces for the prolonged occupation of our country and the prospect of peace talks with the Islamic Emirate are absolutely two heterogeneous ideas. They should recognise that foreign occupation is the root-cause of all adversities; as peace and stability in Afghanistan and the withdrawal of foreign troops are inseparable. Instead of satisfying this just demand of our noble people, why are Americans interested in the pretence of ‘Daish’ for the extension of their illegitimate occupation?

The American invaders and their internal stooges envisage that first the Islamic Emirate should be debilitated militarily, then it should be compelled for negotiations but this is their vain-perception which has no semblance with prevailing facts. The Islamic Emirate enjoys unwavering support of the Mujahid Afghan Nation. The foreign invaders and their internal puppets should realize that no freedom loving people can be subdued by force or by fraud. The ongoing crisis can never be solved by signing illegal and imposed ‘bilateral agreements’. The pretence of ‘Daish’ and prolongation of occupation for decades more cannot untie the knot either. The more the Americans try to find excuses for their prolonged existence inside Afghanistan, the more they are enervating and eventually eliminating themselves!!!