Britain could be next on Islamic State hit list, new video of Paris attackers is released

Video still, 9 men alleged to have participated in Paris attack

Islamic State (IS) has released a new 17 minute video allegedly featuring nine Paris attackers who launched a series of coordinated attacks on at least 6 locations across the French capital in November 2015. Sites of the attacks including the Bataclan theater are featured in the film which could not be independently confirmed. In a statement claiming responsibility following shortly after the assault, IS said,

“a wake up call indeed. 9/11 was planned by few fellas and IS is an entire army fully funded and present almost everywhere.”

Details of the Paris attacks can be read on the following link,

An audio recording claiming to be of Abdelhamid Abaaoud a Belgian national and alleged mastermind of the Paris attacks is played over footage of Parisians trying to escape the horror. There are also recordings of French Prime Minister Manuel Valls and President François Hollande. Abaaoud states, “we will not stop fighting you in every part of the world regardless of whether you are on a tourism trip or a work trip, So expect more. Expect a mujahid to show up to kill you.” Clips also show the police raid on a flat in Saint-Denis not far from Paris where Abaaoud was killed on 18 November 2015. 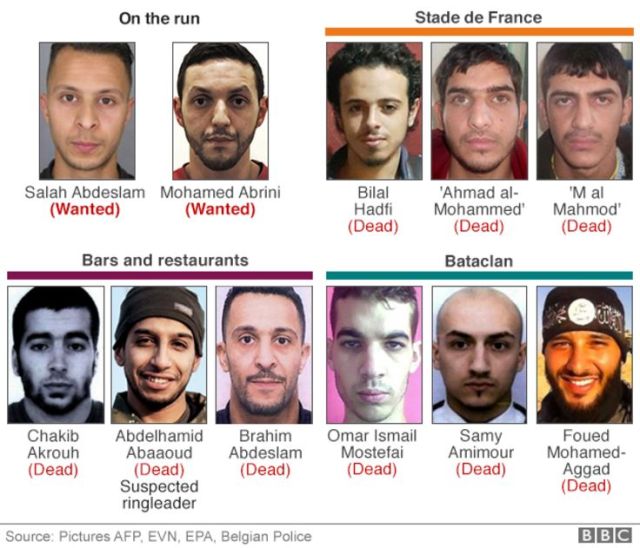 The video features the nine men including Bilal Hadfi (one of the attackers who died at Stade de France) and Samy Amimour (who blew himself up at the Bataclan) wearing camouflage outfits, the locations appears to be Iraq or Syria. They are identified by their nom de guerre (names used in war). Their nationalities are shown as 3 French, 4 Belgian and 2 Iraqis, known as Ali al Iraqi and Ukashah al Iraqi. The film conveys, “these are the last messages of the nine lions of the caliphate who were mobilised from their lairs to make a whole country, France, get down on its knees” The following link from the BBC gives further details of the Paris attackers,

“Paris attacks: Who were the attackers?”

The men are shown beheading and shooting captives described as “apostates”. Samy Amimour is seen holding a captive’s head stating, “soon on the Champs-Elysees.” They also conduct military training. Abaaoud in contrast is not shown participating in executions but appears in a room where an IS flag can be seen in the background. 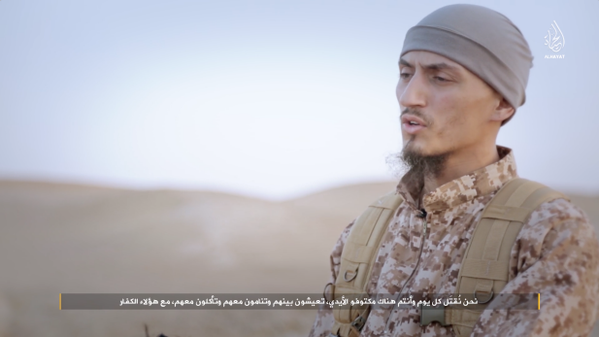 As Rukmini Callimachi Foreign correspondent for The New York Times, focusing on al-Qaeda and ISIS, observes, “they (attackers) are wearing microphones, their movements look rehearsed and quality of footage is high-end”. Callimachi also points out, “the difference between how Abaaoud appears vs others suggests Abaaoud is not in Syria. He’s not in a place where he can be filmed freely.”

Now IS appear to be preparing to hit the UK with Prime Minister David Cameron and John Bercow, the Speaker of the House of Commons appearing in the crosshairs on the latest video. Against a picture of Cameron and threatening the “coalition” are the words, “whoever stands in the ranks of kufr (unbelievers) will be a target for our swords.” Footage used depicts MPs backing air strikes against IS in Syria. There are also images of major London sites.

The BBC reported the words of President Francois Hollande who said the video would not stop France from resisting terrorism, “nothing will deter us, no threat will make France waver in the fight.”