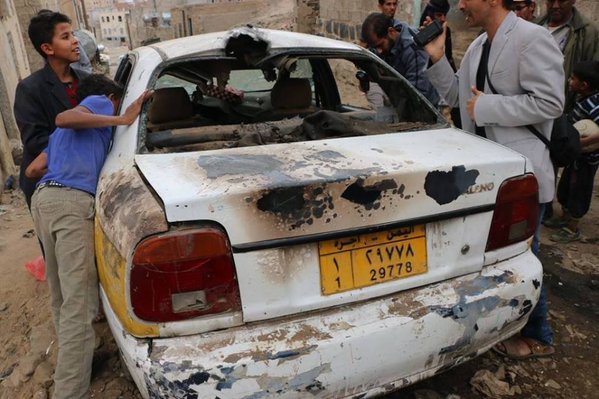 Photo alleging use of cluster bombs in Sanaa (Nasser Arrabyee)

Allegations continue to emerge accusing Saudi Arabia of using cluster bombs on Yemen in the ongoing war following Houthi rebel group take over of the capital Sanaa. The latest attack was said to be on the 6th January 2016. Cluster bombs are banned under a treaty signed by 116 countries, but not by Saudi Arabia. The Cluster Munition Coalition state,

“cluster munitions are dropped from aircraft or fired from the ground or sea, opening up in mid-air to release tens or hundreds of submunitions, which can saturate an area up to the size of several football fields. Anybody within the strike area of the cluster munition, be they military or civilian, is very likely to be killed or seriously injured.

The fuze of each submunition is generally activated as it falls so that it will explode above or on the ground. But often large numbers of the submunitions fail to work as designed, and instead land on the ground without exploding, where they remain as very dangerous duds.”

New photos have emerged posted by Nasser Arrabyee, Yemeni Journalist, Film-maker of (Yemen Alaan, meaning Yemen now) which claim to show evidence of their use on the streets of Sanaa yesterday. Arrabyee claimed 15 cars were damaged and showed photos of buildings allegedly hit. He said Yemen authorities were warning people not to touch remains of cluster bombs. 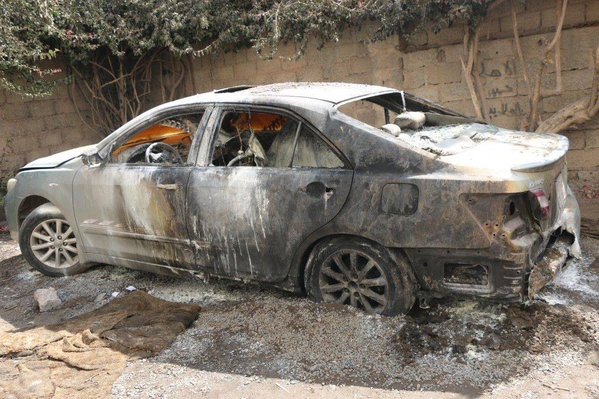 Back in October 2014, Yemeni doctors appealed for help in treating injuries from alleged prohibited weapons showing photos of a man with extensive injuries, see following photo and link, 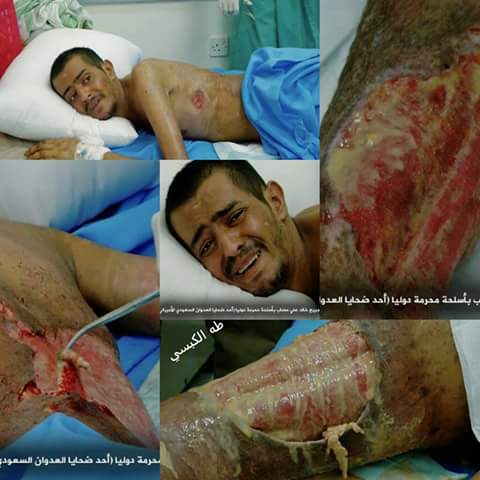 In May 2014, the BBC reported that Human Rights Watch stated, “it had evidence that the bombs were used at least twice against Houthi rebels. There were no reports of casualties.” BBC also said,

“the US and the other countries in Saudi Arabia’s military coalition are not signatories of the 2008 treaty (which banned cluster bombs). The US does however bar the sale of the weapons to countries that use them in civilian areas.”