Islamic Emirate: The epic of Sangin: Beyond the storyline 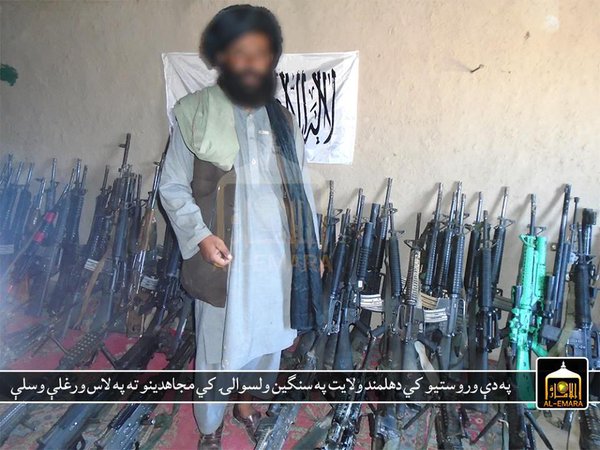 On Wednesday 23rd of December 2015 the district of Sangin in southern Helmand province was completely cleansed from the filth of occupation and afforded an opportunity to breathe the clean fresh air of freedom for the first time in 14 years.

Many media conglomerates broadcasted this event and many analysts debated the pitfalls and shortcomings of the righteous campaign but none actually veered into the depths of this monumental event and searched beyond the storyline to understand the sacrifices, courage and epics which transpired here.

The epic of Sangin is not some one-day event or some average incident that can be summarized in a few short radio segments or analysis rather this event has a 14 year story and enormous sacrifices behind it. Sangin has not only defeated the local auxiliary forces rather Britain, America and many European countries have also tested their mettle and each one has left with a mountain of skulls and tidal waves of disappointments.

Today as I reminisced in my memories I was hit with a seemingly endless series of untold tales of heroics, valor and sacrifices that have taken place in every corner of the proud land of Afghanistan. Although the long story of Sangin cannot be done justice to by writing it down on a piece of paper however I wish to share a small sample of my recollections.

Getting to know Sangin

I had heard of the name Sangin but only came to know it as a Jihad-loving and invader crushing region when British soldiers entered it and found themselves embroiled in bloody fighting in 2007. I still vividly remember how BBC was shocked by the fact the British had lost 10 soldiers in a single week at Sangin. The then British general in Helmand frustrated by the war in Sangin and with a spirit of vengeance declared during an interview: As a soldier I believe the history of Maiwand will not be repeated in Sangin, meaning that the English forces will not accept defeat at the hands of Afghan villagers.

This arrogant assertion would be proven wrong by history as the Englishmen left Sangin wishing Maiwand had shown her face and delivered them from this humiliation.

This incident was narrated to me in the year 2009 by Mullah Ruhul Amin Ruhani, a resident of Sangin’s Sarwan Kala region who at the time was the Jihadi in-charge of Uruzgan province.

One day a convoy of about 32 vehicles mainly Ford Ranger pickup trucks of hirelings backed by several US tanks (APCs) arrived at Sarwan Kala region from Kajaki district. Mujahidin cut-off all 3 routes leading out of Sarwan Kala before initiating attacks on the enemy. At this moment many villagers rushed out in the support of Mujahidin to the extent that I saw an elderly woman shooting at the Englishmen with a pistol, a child wielding an axe as he ran towards the battlefield and an old man firing round after round with his old Enfield rifle. These attacks forced the enemy troops to begin abandoning their vehicles and running towards the nearby hills to seek protection as bullets flied towards them from behind. All in all only 2 vehicles managed to escape towards Sangin center while the other vehicles along with a large amount of arms and equipment including 4 mortar tubes with 300 rounds each were seize by the Mujahidin. At night about 30 helicopters arrived to the area, not to engage the Mujahidin, but merely to recover the bodies of their comrades and rescue the stranded.

Mullah Obaidul Rahman is a famous Taliban commander and the nephew of the martyr, Mullah Akhtar Muhammad Uthmani.

I met him in the month of May 2010 when he was a 25 year old commander of a Jihadi front in Sangin. He narrated the following to me about the situation of Sangin:

The enemy has erected about 30 check posts in the very small area between Sangin riverbed and Greshk and they have similarly built big outposts in Sangin bazaar and Majeed intersection. The enemy has exerted a lot of force to secure the road stretching towards Kajaki however the entire outlying rural areas are under the control of Mujahidin.

Every time the enemy combat patrols leave their bases they run into a labyrinth of IED networks or Mujahideen groups who engaged them with 82mm recoilless rifles, RPGs, snipers and M16 rifles, often forcing the enemy to throw smoke grenades for cover as they collect their casualties and begin their march back towards their bases.

The enemy base located at Majeed intersection is regularly targeted by Mujahideen from the adjacent buildings where they have constructed small holes into the walls from to shoot at any soldier who dares to show himself. Mujahidin have killed many enemy personnel manning the guard tower that is why they have now concealed them with camouflage which makes their spotting very difficult.

The enemy is also using small aircrafts which they fly from their bases for recon before setting out on their patrols however the Mujahidin have countered them with sniper fire, taking into possession around 12 various shaped planes. Similarly over the past one and a half month over 35 enemy tanks (APCs) have been destroyed in this area alone with IEDs and rocket attacks.

Mullah Obaidul Rahman also narrated how they foiled a new technique of the foreign invaders.

He said that as the losses of the foreigners began mounting and their routes were closed off due to the effective use of IEDs by the Mujahidin, they began employing robotic vehicles which would veer out of the enemy outposts before a patrol set out.

This technique was successful to an extent as the enemy managed to destroy many IEDs using this robot to would drive to the area of concern, place explosives over a detected IED and detonate it after driving away to a safe distance.

This robot began causing concern among the Mujahidin so one day 2 courageous Mujahidin drove close an outpost where an IED was placed in anticipation of the robot. When the robot came out to search for IEDs, one of the Mujahid ran towards it and wrapped it in his shoulder shroud as the second drove towards him in a motorbike before both sped off with their prized trophy.

Both of the participants of this operation said that the robot beeped a multitude of sounds during its captivity but technology succumbed when faced with the power of Iman (faith).

It goes without saying that the epics of Sangin like all other victories are only gained with a multitude of skulls and selfless sacrifices of a caravan of unnamed heroes who present their souls to the Lord of the Universe in no other hope but gaining a moment of His pleasure while asking for nothing else in return.

In this series I remembered the story of an old man from Sarwan Kala region’s Alokozo village who displayed the power of his faith to the infidels on January 18th2011 when he struck an American commander in the head with a stone and put him to everlasting sleep. I cannot remember the name of this old man who was later martyred with hundreds of bullets but I do remember the name of another teenager who about a month later stabbed to death 2 American soldiers in Sangin bazaar, his name was Jalat Khan.

Other such heroes who have laid down their lives in the battles of Sangin and through the blessings of whose sacrifices we are celebrating this current victory are Mullah Abdul Bari, Haji Nasrullah, Mawlawi Sa’aduddin, Hafiz Nasim, Mullah Muhammad Nazar Farooqi, Mullah Abdul Qawi, Mullah Amin Tofan, Mullah Abdul Ghafar, Mullah Lala, Haji Ahmad, Haji Mullah Muhammad Jamali and hundreds of others, may Allah accept their martyrdoms.

The invaders exerted all force they could muster to tame Sangin, erecting thousands of posts in the province and hundreds in Sangin before exhaustion caught up with them as the unending guerilla tactics of Mujahidin took its toll.

On the 19th May of 2013 hundreds of Mujahidin crossed the wild Helmand River and infiltrated into Sarwan Kala region, formally bringing an end to guerilla tactics and ushering in a period of frontal warfare by launching fierce relentless attacks on the Arbaki militia check posts.

According to a Taliban commander, the Mujahidin painstakingly began digging tunnels towards the enemy outposts from a distance of about a hundred meters before placing between 1000-1200 kg of explosives right under them and blowing these structures to smithereens.

Realizing the strategic importance of Sangin, the governor of Helmand Mullah Abdul Manan Akhund initially cleared Sarwan Kala region and closed it off the road stretching towards Kajaki. With his orders the Mujahidin then demolished all check posts located between Sangin and Gerishk districts which resulted in the complete isolation of enemy troops in Sangin. To break this siege and reverse Taliban gains the regime launched an operation dubbed ‘Zulfiqar’ in the month of February 2015 where they set fire to Malmand bazaar and razed around 1500 homes and orchards on the road between Gerishk and Sangin.

However these barbarities failed to yield the desired outcome rather it had the complete opposite effect as it further infuriated the nation resulting in the state we are witnessing today; Sangin cleansed from the enemy scourge, basking under the shade of the white flag of Islamic Emirate.