Dear Rohingya: A call to the believers… a poem by Saqib Majid 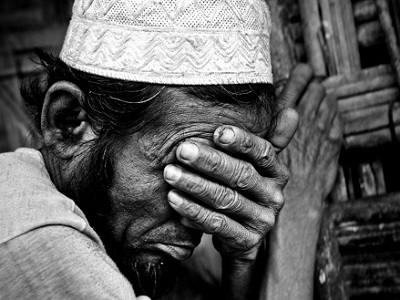 Image “at a Rohingya refugee camp in Bangladesh” (Zoriah.net)

Dear Brethren of ours,

I feel at loss and at shame;

That your carcasses line the street

Yet, there is barely a sound,

So far from an upheaval;

The media blackout in your regions

Oh, how your oppressors are so evil !!

As a Muslim from afar,

Feel , I am your kindred,

Our sorrow is not ajar !

And when a child they expect,

That they are forced to have their faces

And the abdomens checked !

They tax you even to breathe,

You are in desperate need,

When you cross the border to find retreat,

There is no solace on the street

Sent back by the Dhaka government;

Despite brethren in belief ..

Sending forces to halt them at the border,

Yet supporting the sham United Nations,

With such will and ease!

A woeful feature of our days,

And the blood will spray,

Yet In the senates and chambers,

They will sit unfazed..

We are all a homeless people

But we have Allah on our side,

And his system clear as ice !

Raise the call today for change,

So that the oppressed are behind the Caliph

“No tomorrow for this six-year old Rohingya refugee girl”