Islamic Emirate: A few words about the Zabul seven protests 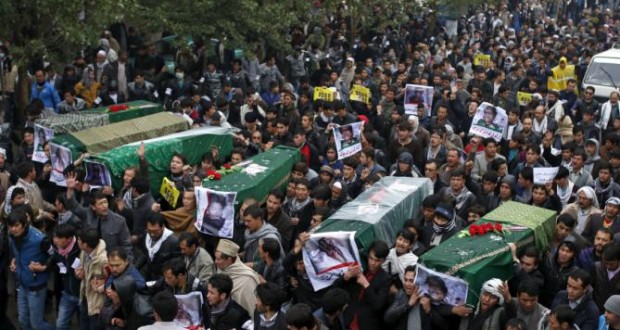 Thousands of protesters carrying the coffins of 7 civilians killed by Daesh in Zabul province on their shoulders marched from Kabul city’s Pul-e-Sokhta all the way up to the gates of Arg (Presidential Palace).

These protesters who claimed to be grieving and sympathizing with the dead demanded that the unity government build an Army Corps in Bamiyan, turn Jaghori district of Ghazni into a separate province and designate a specific hill in Kabul city in memorial of 7 Hazaras killed in Zabul.

This protest which was extensively covered by the television channel ‘Tolo’ was labeled by the workers of this channel the largest protest to have ever been held in the history of Kabul.

The head of the unity government as usual orally agreed to some of the demands of the protesters and deemed other demands above and beyond the capacity of government powers.

The organizers of the protest, who all hail from a single ethnic group, in reality wanted to project their force to the officials of the Presidential Palace and consolidate their power in the corridors of the unity government. If this was not the case then thousands of people have been killed way more brutally than the 7 Hazaras in the attacks of the Americans and their stooge forces over the course of the 14 year war but no one ever convened such a large protest and neither has anyone yet demanded Army Corps or creation of separate provinces.

Afghanistan has daily witnessed the death, grieving and protests of Afghans from the first day of the hideous American invasion but unfortunately, the government propped up by the Americans and forced upon the Afghans has repeatedly failed to answer the demands of the Afghan victims and protesters.

An example of this impotency of the Kabul regime which enjoys the boundless backing of the Americans and ‘coalition partners’ and has also signed onto the ‘Bilateral Security Agreement’, failed to secure the release of these same 7 kidnapped countrymen from the hands of a small number of kidnappers over the past 9 months, a task which the Taliban managed to achieve in the course of 24 hours and with a very small force.

The incompetency of the Kabul regime has reached a point that it has come to consider the release of victims due to the military operation of Taliban in Zabul province as the achievement of its own security forces!? This despite the fact that the released victims themselves and the locals of the area testify that they were delivered by the military operation of Taliban from the hands of Daesh terrorists and later handed over to local influential elders.

If the government forces were really capable of rescuing these kidnapped victims than why did they leave them in the detention of Daeshi terrorists for the past 9 months?

All in all, the officials of the powerless government are only good at generating more problems for the country instead of solving any of the countless issues at hand. The head of the unity government who himself testifies to the failures and impotency of his own government, is so uselessly feeble that he cannot even forward his own resignation to his office due of his failure at preventing the thousands of security incidents taking place throughout the country.

Such an authoritarian regime and such a powerful commander in-chief!!! is the direct result of that same American support which forced the signing the security agreement under the shadow of the ongoing occupation and in complete disagreement with the demands of government officials and the entire nation.