Just days after a hospital in the northern province of Saada, Yemen was bombed by Saudi Arabia-led coalition forces, a Yemeni journalist raises concerns that KSA may be using prohibited weapons and doctors are struggling to cope with the injured.

Nasser Arrabyee a Yemeni Journalist and Film-maker (Yemen Alaan, meaning Yemen Now) based in Sanaa posted a series of photos showing a man looking visibly distressed with large, open and suppurating wounds to his body. Limbs appeared swollen and starting to blacken. Khalid Tahami is allegedly a victim of cluster bombs and the doctors are unsure how to treat.

A cluster bomb releases a number of projectiles on impact which can cover an area of 2 to 3 football fields and any unexploded bomblets can later be accidently activated on contact like a landmine. Handicap International UK warns of the dangers of cluster bombs on their website, claiming,

“they cannot differentiate between military personnel and civilians. A single cluster bomb can scatter hundreds of submunitions over an area as big as several football pitches. When these submunitions explode, they blast out hundreds of metal fragments, killing or severely injuring anyone in the area – military or civilian”.

The organization also gives details regarding the Convention on Cluster Munitions which is “an international law banning the use, stockpiling, production and transfer of cluster munitions” see link,

To understand how cluster bombs work view the following video link, “Cluster bombs: Hell from above”

Bryan Schatz writing in Mother Jones in June highlights that US cluster bombs banned by 100 countries are being used in Yemen. He states,

“of the three types of cluster munitions identified recently in Yemen, two were manufactured in the United States and supplied by the US government”.

“By law, the US government can can only sell or supply cluster munitions with a one percent failure rate, and they are to be used only on specific military targets where civilians are not present. But HRW found that the Saudi cluster munitions attacks in Yemen occurred near populated areas, such as the village of al-Amar on its busy market day”.

As medical supplies run low in some areas, it is unclear if there is access to pain relief or antibiotics for Khalid, if unavailable this could result in serious infection threatening the lives of patients. Arrabyee tweeted, “Yemeni doctors in Sanaa can not treat Khaled Ali and others injured by internationally prohibited weapons” which he views as Saudi crimes. He said, “Yemeni doctors are appealing to experts of the world to help those injured by cluster bombs” and asked, “WHO CAN HELP ?”

Handicap International UK provides the following information on how cluster bombs affect those targeted, they write,

“innocent people lose lives and limbs through cluster bombs every day. 98 percent of the recorded victims of cluster munitions are civilians.

The fragments of exploding submunitions travel at high velocity. When they strike they set off pressure waves within the body, which do horrific damage to soft tissue and organs. Even a single fragment can rupture a person’s spleen, or cause the intestines to explode.

If a victim survives the accident, they are often left with serious injuries. They may lose arms, legs, hands, or feet in the accident, leading to lifelong disability. They may also suffer multiple puncture wounds, ruptured eardrums, and blindness.”

As a weapon designed to terrorise, accidents leave victims and their families battling with psychological trauma as well as their injuries. Victims can experience a loss of identity and and may find it difficult to take part in community life, or access the services they need. They may even experience discrimination on the basis of their disability”.

It appears what is needed now is specialist help, doctors with experience in this field to support and guide. Arrabyee told me, “doctors say, they do not understand why Khaled’s skin and bones keep lacerating continuously.” Reuters reported, “the United Nations and aid groups have expressed alarm at a worsening humanitarian crisis in Yemen, which even before the war struggled with widespread poverty and hunger. They say civilian targets, including markets, factories, houses, schools and hospitals, have been bombed”. 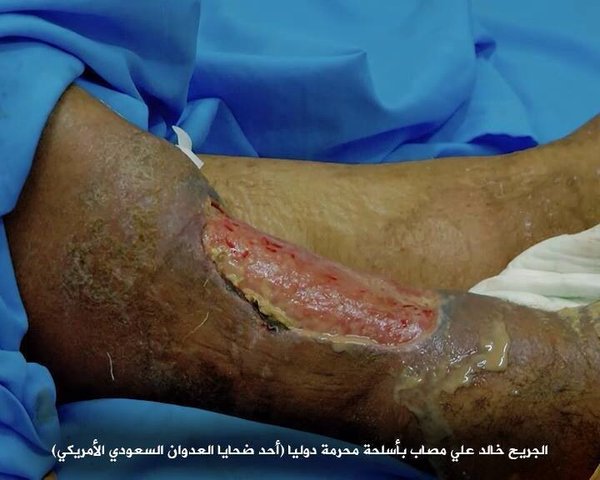 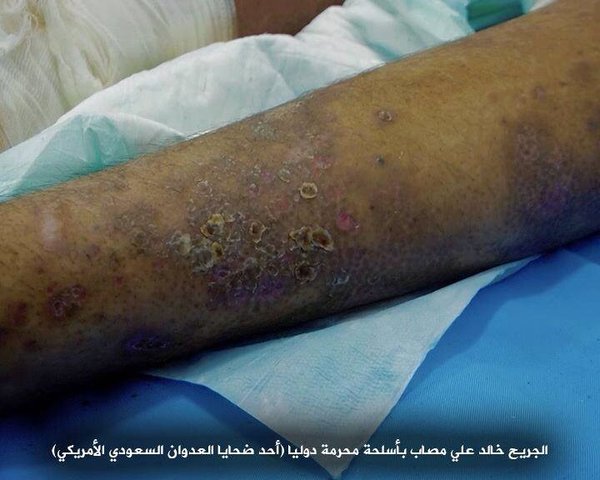 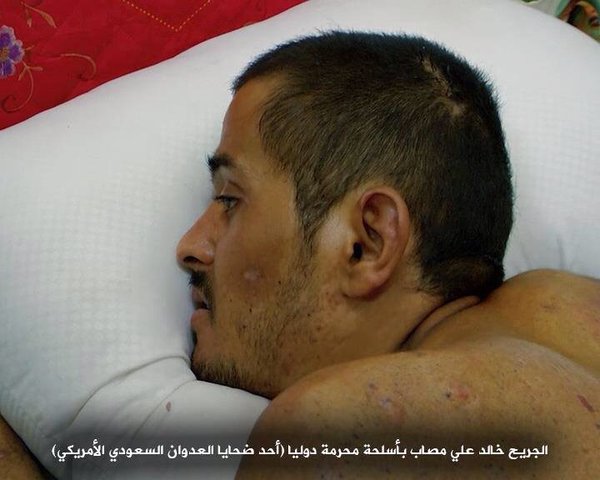 As I am writing this article, the news comes in of a bombing on a bus which has killed 23 employees at Taiz according to Arrabyee who tweeted photos of the aftermath. He said, the attack had happened a few hours ago, stating, “Saudi war criminals keep killing every minute. They are bombing all over Yemen villages, cities, etc!” It is unclear if cluster bombs were used in the bus attack. 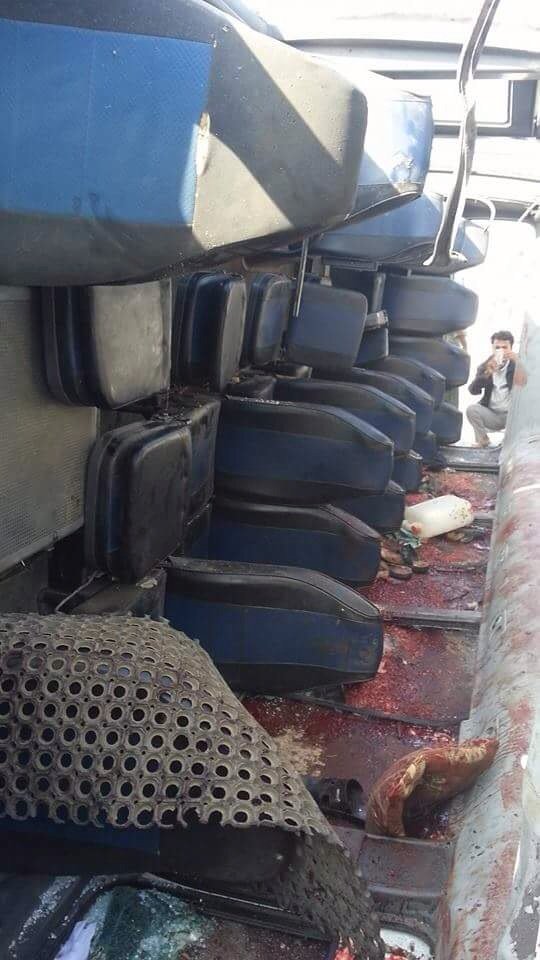 Arrabyee tweeted, “this is Ahmed Sharaf Addeen, Yemeni in Sanaa, looking at his house after he and all family miraculously survived.”

As well as bombs there had been reports in recent days of difficulties in accessing some Houthi-controlled areas in Taiz province. Karline Kleijer, Medecin San Frontier’s emergency manager for Yemen stated,

“the hospitals in this besieged area are seeing large number of patients with war wounds and yet we have been prevented from delivering essential medical supplies – including chest tubes, anaesthetic drugs, IV fluid, sutures and antibiotics – to help staff provide lifesaving surgery.”

“It is very frustrating that, after weeks of negotiations, we have made no progress in convincing officials of the need to provide impartial medical assistance to the victims of the ongoing fighting within this enclave, despite the continued support we are providing to health facilities in Houthi-controlled areas.”

Christian Beck posted a photo of a lorry on Instagram which read, 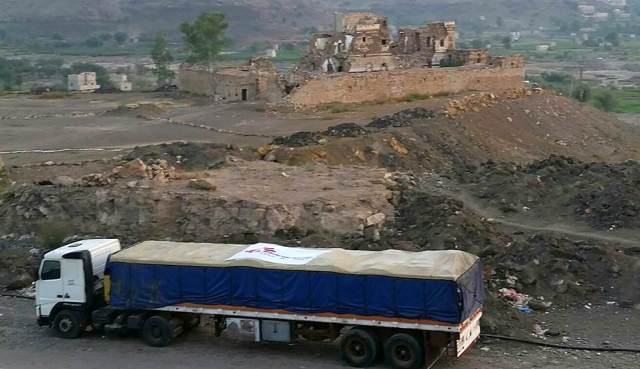 Only 6 hospitals operating in Taiz & medical supplies blocked. This crisis goes way beyond the fighting #Yemen

Bombing of a hospital in Saada

Human rights organizations condemned the recent bombing of a Saada hospital highlighting that staff had given GPS coordinates for the health facility which was clearly marked as a Medecins Sans Frontier hospital yet was repeatedly hit. There were no deaths on this occasion but there were injuries from flying debris and the building was reported to have sustained around 90% damage. This comes only weeks after an MSF hospital was bombed in the city of Kunduz, Afghanistan. See,

“Kunduz hospital had complained of threats from Afghan Special Forces in July, a full and independent investigation into bombing is essential”

Philip Luther, Director for the Middle East and North Africa at Amnesty International condemned the attack calling for an “independent investigation into why hospitals and their patients are being targeted, rather than protected, as international humanitarian law requires”. He said, “the attack on Haydan Hospital appears to have been an unlawful attack causing harm to civilians and civilian objects. The consecutive airstrikes show deliberate targeting of the medical facility – this is another sad day for civilians.”

Full story can be read here,

The picture in Yemen is grim with little hope of swift relief from the ongoing war. Analyst Farea al-Muslimi told Reuters, “the conflict is totally deadlocked. There’s no political solution around the corner and both sides are settling scores with each other with impunity as civilians are stuck in the middle.”

“Yemen crisis: Who is fighting whom?”