Is Netanyahu a form of “holocaust denier” for distorting history? Prime Minister’s comments incite both derision and anger 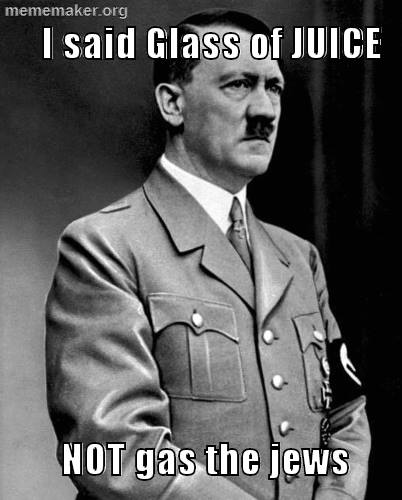 Israeli prime minister, Binyamin Netanyahu has come under severe criticism for his bizarre speech to the World Zionist Congress in Jerusalem after which his sanity came under question. In an extraordinary revision of history he claimed that Haj Amin al-Husseini head of the Palestinian grand mufti of Jerusalem during the Second World War was responsible for “inspiring the Holocaust” as opposed to Hitler and the Nazis. The Guardian reported,

“in his speech, Netanyahu purported to describe a meeting between Haj Amin al-Husseini and Hitler in November 1941. “Hitler didn’t want to exterminate the Jews at the time, he wanted to expel the Jews. And Haj Amin al-Husseini went to Hitler and said: ‘If you expel them, they’ll all come here [to Palestine].’” According to Netanyahu, Hitler then asked: “What should I do with them?” and the mufti replied: “Burn them.””

The majority view by most Holocaust scholars is that the first death camps were already underway before the 1941 meeting between Husseini and Hitler. A minority challenge that thinking. Social media was abuzz with comments on Netanyahu’s statement which ranged from derision to anger. Younes Arar, a Palestinian activist and human rights defender from Hebron, West Bank posted a satirical photo of Hitler saying, “I said glass of juice not gas the Jews”. He stated,

“Now this is hilarious,
Are Palestinians behind World War 11, did the Palestinians dropped the first two ATOMIC bombs on Hiroshima and Nagasaki, are the Palestinians standing behind Global Warming????????
I think the successors of Nazis must celebrate, their Symbol and President Hitler was innocent, he didn’t have the intention to Exterminate the Jews according to Zionist occupation Prime Minister Netanyahu, he said that yesterday before the Zionist Conference held in occupied Jerusalem, he literally said:”Hitler didnt have the intention to kill and burn the Jews, but the Palestinian Haj Amin Elhusaini convinced him to do so, Hitler only intended to expel Jews out of Germany and all other countries he occupied”…Very good news for the innocent Nazis!!!!!!!!!!!, BUT, is Natanyahu trying to legitimize EXTERMINATING the Palestinians by using such lies, is he Justifying the ongoing executions and extermination of Palestinians on daily Basis, are we the Palestinians about to face mass Massacres by fascist Zionists, should we expect that??????????????????????, 21 October 2015.”

Is Netanyahu a Holocaust denier? (Image via Independent)

It must have been a field day for holocaust deniers and Ruth Flood from Ireland wondered if the Jewish PM had now become one of them. Holocaust denial is illegal in 14 European nations and some have criminalized denial of genocide. Referring to his speech, Flood said, “wouldn’t it be ironic if this was a form of holocaust denial, cos he is actually denying the reality of it”.

Haaretz quoted Zionist Union leader Isaac Herzog who stated, “this is a dangerous historical distortion and I demand Netanyahu correct it immediately as it minimizes the Holocaust, Nazism and…Hitler’s part in our people’s terrible disaster,” Abed Algader from Gaza alleged, “he wants to justify a criminal offense in front of the world, criminal who protects criminals like him. This is a country that love wars and criminality are the cause of chaos in the world. Racists, Criminals”. Haaretz also reported the words of Arab Joint List leader Ayman Odeh who said Netanyahu

“is rewriting history in order to incite against the Palestinian people. The victims of the Nazi monster, among them millions of Jews, have become cheap propaganda in the service of peace rejectionism. Netanyahu proves every day how dangerous he is for both peoples, and how far he’s willing to go to cement his rule and justify his disastrous policies.”

Senior Palestinian official Saeb Erekat was quoted in the Telegraph saying, “Netanyahu hates Palestinians so much that he is willing to absolve Hitler of the murder of 6 million Jews.”

Carlos Latuf, an Arab Brazilian freelance political cartoonist was on the ball as usual offering his depiction of Netanyahu and his comments. 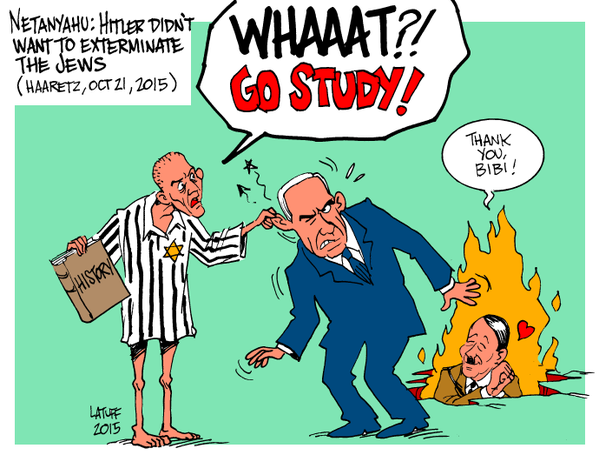 Netanyahu’s comments come at a time of renewed violence where Palestinians are shot almost daily under Israeli occupation and Jews have been targeted in knife attacks. This  will only add fuel to the fire.