Islamic Emirate of Afghanistan: “What else do you term “people’s revolution”? 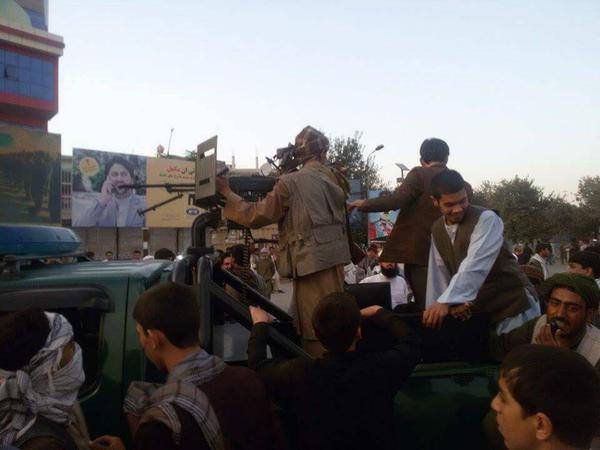 The people staged their uprising against the invaders and their hirelings in the preliminary years of the invasion of Afghanistan. This uprising in form of sacred Jihad was initially confined to far flung areas throughout the country but due to the absolute hate of the Afghan Mujahid nation towards occupation, it quickly spread and gained momentum throughout the country, eventually targeting enemy bastions in the heart of the capital Kabul.

In an effort to project its influence and power, the enemy began terming this revolution of the Afghan nation as individual acts of terror perpetrated due to the instigation of foreigners however in reality, this was an uprising of the people against the invading forces and their lackeys.

The devious enemy and those entrapped in the basin of its propaganda are still trying to portray this sacred struggle of the Afghan nation as the work of others while exerting extreme efforts in hiding their losses and crimes as well as playing down the gains of the Mujahidin.

The meteoric advances of the Mujahidin in only this year’s ‘Azm’ campaign and the losses of the enemy are events not possible without the complete backing and support of the nation. The conquests of Mujahidin are not merely confined to a specific region rather it has dealt heavy blows to the enemy in all corners of the country.

For example, Mujahidin managed to take control of large swaths of lands in Kunduz and Baghlan provinces including the capital, Kunduz city. They also took over Baharak, Warduj districts and other areas in Badakhshan, Ishkamesh, Khwaja Ghar and Yangi Qala districts in Takhar, strategic Kohistan district and peripheries of Saripul provinicial capital, Kham Aab and Aqcha districts in Jawzjan, Almar, Qisar, Pashtun Kot, Khwaja Musa and Garzewan districts in Faryab as well as bringing Ghormach district and other large areas of Badghis province under their complete control.

The east of the country saw Mujahideen bringing security to Hisarak, Khogyano and Sherzad districts of Nangarhar as well as clearing many areas from the menace of enemy in Kunar and Nuristan provinces.

On top of clearing large areas of Kapisa, gateway to Kabul, Mujahidin have taken over the entire district of Tagab not counting the fortified walls around the administration buildings while stepping up attacks in Kabul, Parwan, Logar and Maidan Wardag provinces, forcing the enemy to abandon large bases in numerous districts. Another point worth noting is that the heroic Mujahidin of Islamic Emirate also managed to cut-off the main Kabul-Kandahar highway for many days, causing the enemy heavy material and corporeal losses and proving their determination and strength of being able to strike anywhere at the time of their choosing.

What else do you term ‘People’s Revolution’: The Mujahidin not only live in the plains and mountains, in the east and west, north and south of the country but have continued their valiant struggle in defense of their nation and sustained attacks against the invaders and their lackeys. Meanwhile the invaders and their axillaries have failed in pacifying the cries of their sacred Jihadi struggle and are unable of even spending a single day in the mountains and rural areas of the country despite owning the world’s most advanced weapons and technology. So if the ongoing struggle under the name of ‘Taliban’ is not termed ‘People’s Revolution’ than what else do you call a people’s revolution? clearly if one was to take off his goggles of prejudice than one would understand that the struggle against the invaders and the Kabul regime is nothing more than an Uprising of the People.