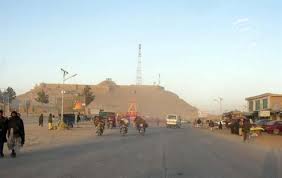 ZABUL, Oct. 14 – For the past 2 days Mujahideen of Islamic Emirate have taken up positions along the main Kandahar-Kabul highway running through southern Zabul province, cutting off all traffic and setting up ambushes at multiple points in Sayed Jan, Zafar Khelo, Spina Ghbargi and Maghlezo areas of the capital; Tazi Rabat, Hassan Karez and Nawrak areas of Shahjoi as well as Hazartak area of Shahr-e-Safa district.

It is said that an enemy vehicle and 6 APCs were destroyed during yesterday’s clashes, killing and wounding tens of enemy troops and forcing the rest to flee towards their check posts in fear of their lives.

Mujahideen  also captured a truck packed with logistics meant to supply enemy forces, according to reports whereas Khado check post was also overrun by Mujahideen overnight in Shahr-e-Safa district in which 15 gunmen were killed.

2 Mujahideen were also injured by enemy return fire and another rewarded martyrdom (may Allah accept him).